Winter Months across the Country with Jay Yelas

Because of the vastness of the country, the fishing opportunities that present themselves to the country can vary wildly.  While the calendar might read January and snow is on your lawn, the page to the spawn may have been flipped in certain areas of the land.

Gratefully, as varied as the regions are, so are the ways in which we can catch a bass.  While the lakes may more closely resemble skating rinks in the north, some anglers may be staring at them; our world is just that diverse.

With that in mind, FLW Tour Pro Jay Yelas, from Corvallis, Ore. took some time to lay out what he would look for in certain areas of the country.  Yelas is one of only 12 anglers to have won the Bassmaster Classic and the Bassmaster Angler of the Year titles.  He is also one Forrest Wood Cup win away from earning the coveted Pro Angler Grand Slam; winning the championship and the Angler of the Year Tile on both tours.

Being a West Coast native, Yelas has built his career on versatility and winning as much as he has requires the ability to do many different things with a fishing rod.  “Late winter to early spring is the best time to catch big fish all around the country,” said Yelas.  “There are many ways to catch bass this time of year; it just depends on the area you’re in, and what kind of lake you’re fishing.” 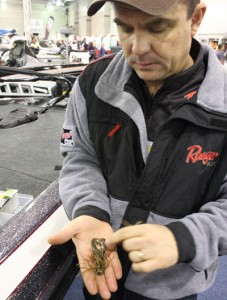 Here is how Yelas breaks down the country, during the mostdynamic two months of the year; January and February.

Florida
Bass fishing’s eyes are firmly locked on Florida lakes at this point in time.  The annual tournament schedule opened there in early January with the first FLW Everstart Southern Division event on Lake Okeechobee.  The Bassmaster Southern Opens began this past weekend with Gerald Swindle claiming victory on Lake Toho.   The first FLW Tour Open of the year begins the first week of February, and the Bassmaster Elite Series kicks off on the St. John’s River a couple of weeks after the Bassmaster Classic.

Yelas said he expects to see a repeat of the 2001 Bassmaster Tour stop on Toho, where the fish were locked in full spawn.  No one could rightly predict whether the bass will come to the scales in record numbers at any lake, but he certainly expects a spawn to be in full swing once his boat hits the water on Okeechobee.

“In a couple weeks we are headed to Okeechobee and I expect the fish to be on beds,” Yelas said.  “It won’t surprise me to see big bags of spawners at the scales, but I’m not sure if we’ll see it like it was in 2001.”  That tournament broke records, as winner, Dean Rojas smashed a total of 108 pounds, 12 ounces.  His record weight included a single day’s limit that weighed 45 pounds, 2 ounces.

Yelas said that the limit remains his heaviest one day weight to this day, “I had the biggest stringer I ever caught down there on the second day of that tournament which at the time it was the third biggest limit in the history of B.A.S.S.,” Yelas.  “I was catching those fish on beds; I caught two nines and an eleven on beds within 45 minutes of each other. That’s how exciting Florida fishing can be when those fish pop up on beds.” 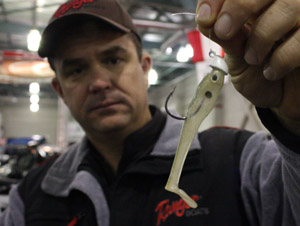 Yelas reported using several lures that day.  “I caught the first two on watermelon colored Berkley PowerBait Tube and found that 11 pounder on a bed in some hydrilla,” he said.  “I flipped that watermelon tube on her two times and she wouldn’t look at it.  I reeled it in and I had a 6” black and chartreuse power lizard and on the first cast she just spun on it and ate it, so I caught her on the third cast.”

He suggested anglers keep an open mind when sight fishing, which led him to discover an odd use for a particular lure.  “Sometimes when you are bed fishing you need to try different baits. I mentioned the tube, the lizard and sometimes drop shotting can get them really fired up, Yelas reported.  “One of my favorite baits lately has been a 3” Gulp Craw on a drop shot; they eat that up on beds.”

Highland Lakes
Yelas said he understands that Florida is the exception this time of year, and that the water is still 50 degrees or below in most of the country.  “It’s cold in most of the country, but the fish are still catchable,” he said.  “The biggest key is to fish slow and sometimes you will have to fish deep for them.”

He revealed that the technique used depends on the type of water anglers are fishing.  “If you are on a higher land lake like in California Lake Shasta, or in Missouri Table Rock, then you are likely going to have to fish deep for them,” said Yelas. “If they’re deep, drop shotting or swimming a grub or a deep swimbait or a football head jig like the Berkley Gripper Jig are great. 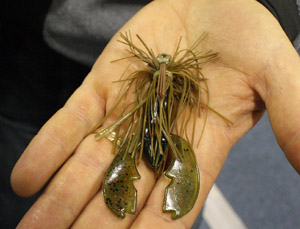 Yelas said the jig comes equipped with a trailer, but he will switch to one with more action if the fish get more aggressive.  “For the tail action, I am looking for something like a double tail in the early winter, but as the weather warms, I like the flapper type action of the Chigger Chunk,” he said that he will change to a more subtle action if bass are very lethargic.  “If it’s really cold, I just put a regular Power Craw on the back of the jig, that doesn’t have a lot of action. You are just fishing slow, deep and slow with that jig.  You are just counting rocks on the bottom, use light line, eight to ten-pound Trilene 100% Fluorocarbon and just drag that jig 30 to 40 and sometimes 60 feet deep.”

Yelas likes to stay with the Gripper Jig for the most part because of its power to attract big bites, but if things get really tough, he downsizes.  “If it gets really tough, I will go to the drop shot and a four-inch Berkley PowerBait Hand Poured Worm on eight-pound Trilene 100% Fluorocarbon and a size 2 Mustad dropshot hook,” he said that tactic is usually reserved for spotted bass fisheries.  “If the largemouth are there I will usually stick with the jig because you can get five of those to bite during the course of the day; most of the time.”

He said that one technique he likes is reserved for submerged timber, like is prevalent on lakes like Missouri’s Table Rock.  Table Rock is known for having fish suspend in the tree tops that can be 30 feet below the surface; there he turns to a Berkley Hollow Belly swimbait.  “I like to put the Hollow Belly on a 1/2 to 3/4-ounce jig head and swim it right on top of those trees,” he said.  “The fish will rush to the top to eat it, but you have to be really slow with it, don’t get in a hurry.” 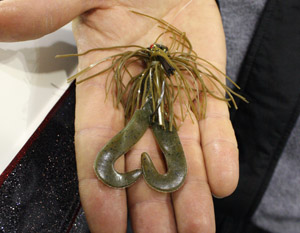 Grassy Lakes
For low land reservoirs in the south on the Tennessee River – places like Kentucky Lake, Guntersville or in Texas on Sam Rayburn, Toledo Bend, Yelas reports that the fish are creek channel related.  He said that their positioning, and brief migrations to feed are brief windows of opportunity.  “The fish will hang around the creek channels but, they’ll pull up the grassy flats to feed,” he said.  “I have the best results through the winter time on those lakes with rattling, lipless crankbaits.”

While the western native lived in Texas for many years, he found that most events in January are won on lipless crankbaits.  “It’s just amazing how effective they can be,” he said.  “You would think they wouldn’t be active, but they can be caught really well on these baits when they’re slow rolled through the grass.”

Yelas said he chooses colors by water clarity.  “I usually use red colors in Texas, but, if the water is really dirty then an orange one can be really good,” he said  “If it’s super clear then I choose shad patterns.”  On Tennessee River Authority Lakes like Guntersville, he reports using chrome and blue or RT52; named Chartreuse Shiner, a light chartreuse body with a shad scale back.

Yelas said he’s always been amazed at how the same genetic animal can get comfortable where they are.  “It’s fascinating about our sport how bass adapt to their environment they are in,” he said in closing.  “Pay attention to the types of lake you are fishing and the conditions around you and putting together a predictable plan can be pretty simple.”