For many anglers, winter may be one of the toughest times to catch bass, but, it can also be one of the easiest times for those who know where to find them, and what to do once they are located.

Skeet Reese is one of those anglers.

Reese, the 41-year-old Bassmaster Elite Series pro spent the early part of his career fishing on waters that required an angler to be able to adapt. He might find himself with a reaction bait rod in his hand on one body of water, or a flipping stick on another, but he often had to downsize his offerings and “get thin.”

While he lists his favorite body of water as Clear Lake , a shallow lake that favors power fishing for most of the year, Reese is one of those anglers who can adjust when things become tough. “Even at home in the offseason, I prefer to be throwing a jerkbait or a crankbait,” said Reese. “But, there are times when I have to scale down, and if I want to be able to win; I need to be ready to do that. 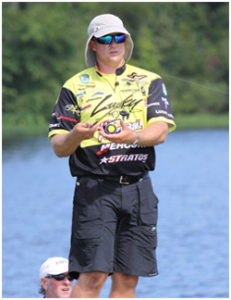 He begins each day looking for reaction bite, and in the colder months, that usually means he’ll be throwing a jerkbait. Over the past two seasons, the Lucky Craft Slim Shad D9 has become one of his favorites on waterways that have healthy shad populations. However, when he’s on a lake with slender baitfish, a Pointer Minnow or even a Staysee are the choices. “I employ a jerkbait retrieve that gives a lot of time to pause and let the bait suspend,” he said. “The time between jerks will vary, but what I’m trying to do is make sluggish fish respond to the lure as it suspends in front of them.”

There are times however, that even the most patient angler struggles to make bass chase a reaction bait. “If there is a lot of pressure from other anglers, or if the conditions are extreme, I’ll have to change,” said the six-time B.A.S.S. winner. “If I can’t get them to eat a reaction bait, or a jig, I’ll turn to finesse tactics.”

“My typical setup includes one of my Wright & McGill Co. Tessera spinning rods, usually my 7’2” Drop Shot model,” said Reese. “I pair that with one of my 3000 size Victory spinning reels and 8-pound-test Berkley Trilene 100% Fluorocarbon line.” 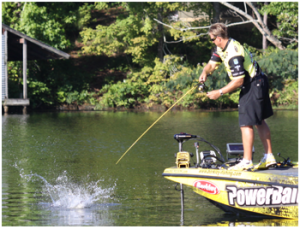 While that setup is his first choice, Reese may have to downscale even further. For that, he worked with Wright & McGill to come up with a rod that he believes is the ultimate finesse rod for 6-pound test lines and under. “If I have to use really light lines, I use the new Finesse Tube and Jig Micro Honeycomb rod with the smaller 2500 size Victory spinning reel,” he said. “The rod and reel present the perfect combination of weight and balance, and the taper of the blank is ideal for handling superlight lines without overpowering them.”

To combat tough conditions in tournaments, Reese said that he has to mix in the light line approach throughout a four-day event. “I use finesse tactics on tour a lot,” he revealed. “There are times that I’ve had to use it in tournaments when power fishing was my primary approach.” Those have included a drop shot rig, a shaky head, a Texas rig with or a sink worm.”

Practical Applications
One example of that was his first of two Elite Series victories in the 2010 season at Smith Mountain Lake in Virginia . Reese made history by pounding his competition; who were largely sight fishing for spawning bass, with a swimbait. However effective the swimbait pattern proved to be the final two days of the event, a wacky rigged green pumpkin PowerBait Heavyweight Sink Worm on a TroKar Drop Shot Hook helped fill in quality fish when the water was slick the first two days.

“I was able to catch a couple fish on my Rago SKT Swimmer each of the first two days, but the conditions weren’t ideal for it,” he said. “Having my spinning rod at the ready helped me target fish around isolated pieces of structure that filled my limit; had I only thrown the swimbait those first two days, I may not have been in the position for the win.”

He stressed using electronics to help in tough conditions like the winter, but said he often can locate his fish and make them bite with light tackle once he does locate them. “My Lowrance Structure Scan technology has helped me locate areas that bass have grouped up in the winter, and once I find them, I can target them with the light line approach,” he said. “It may take a little while to find them, but once I do and can get them to bite, I can load the boat quickly.”

Cold Water Adjustments
Reese feels that cold water requires an angler to make certain adjustments for the time of the year. His experience during the winter months leads him to believe that forage, and therefore the bass tend to hold tighter to the bottom, so his presentations are geared for that. “I prefer shaky heads and light Texas rigged worms in cold water,” he said. “If I do use a drop shot rig, I use a short leader; sometimes as little as four inches.” 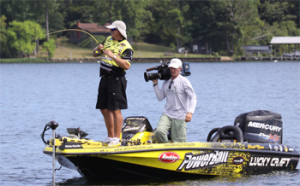 He also targets hard cover during the winter months, because it offers bass a more comfortable environment. “I try to locate rockpiles, wood, or even better is a spot where the two types of cover come together,” he said. “Bass hold around hard objects because they hold the heat, and can make the water temperature around them a little more comfortable.”

He also suggested that anglers who locate prime areas be prepared to stay for long periods of time. “Once I find a good piece of cover, I fish it slowly,” he said. “There are times that I will let a bait soak in one spot for as much as two to three minutes before shaking it; it matches the mod of the bass, and gives them time to respond.”

Bait and Hooks
Lure choice varies depending on the technique. For the dropshot rig, he tends to use four-inch Berkley Finesse Hand Pours, on a shaky head the first choice is a five-inch PowerBait Shaky Worm, and he uses the six-inch versions of the Shaky Worm and Finesse Hand Pours when he’s using the Texas rig. For wacky rigging, the five-inch Heavyweight Sinking Worm is the first choice.

Hook choice depends on the size of the worm primarily, for dropshotting smaller worms; a size 1 TroKar drop shot hook does the job. For the Texas rig, a size 1/0 to 3/0 Light Wire Finesse Hook or HD Worm Hook, and the 1/0 size of the drop shot hook is used for wacky rigging.

His shaky head of choice is one of the original styles that doesn’t have a screw lock feature as a part of the head. He prefers to run the head of the worm up the shank of the hook and use the molded bait keeper because it holds the worm on the hook better. He related that “the spring style keepers tend to tear up baits more so than the original method of rigging.”

Finesse Tips
He suggested anglers to not limit finesse fishing too much. “The common belief is that these are only deep or clear water techniques,” he said. “Finesse fishing is a great way to get bites in shallow water, and it will still work in off colored water; unstable weather, slick water and high fishing pressure are really the factors that make me choose to lighten up.”

Once anglers get a bite, he cautions not to overpower the equipment with a big hookset. “I usually use a sweep hookset, and let the turning of the reel handle help take the stretch out of the line and penetrate the hook,” he said. “It doesn’t take much with the fluorocarbon, and the sharpness of today’s hooks to get a solid hookset.”

He also cautioned anglers to take their time in bringing fish to the side of the boat. “More fish are lost because anglers get them to the boat too quickly,” said Reese. “Take your time, and let the drag do the work. The fish will tire out, making them easier to land.”