Fishing Ahead with Greg Vinson

It’s early spring and the bass should be spawning, but they aren’t quite in the areas you’d expect them to be.  You think you know where they live; but, it’s spring, and your gut tells you they should be near the spawn.  But, the conditions aren’t quite right, the water’s not quite warm enough, you’re on the tail end of a front, and the full moon is a little more than a week away with a forecasted warming trend coming. 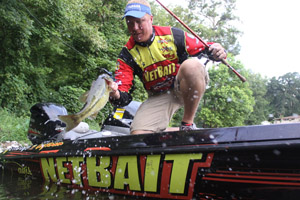 While practicing for your upcoming tournament, you follow you textbook learning, and you backtrack until you find the fish staging in an area outside of the spawning cove.  They are good ones, the kind that make you bite your lip when someone asks about your practice for the team tournament you’re fishing next week.  You’re absolutely dialed in – you think.

Tournament day arrives, and your boat number is called.  You stomp on the accelerator hoping to beat everyone to your honey hole; which you do.  You excitedly pick up your rod and start fishing; nothing.  An hour goes by, and you’ve caught a couple small keepers; your partner nothing.  You keep telling yourself to be patient, they’ll bite; you know they’re here.  By the end of the day, you’ve run around to 12 different spots, scratched up a small limit, and the promise of a big win ended up being nothing more than a pipe dream. 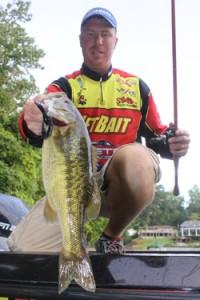 What sets the sports best anglers apart in most cases is not necessarily piece of equipment, or a new custom prototype lure.  What makes the difference for them is their ability to see what’s coming, to plan ahead in their practice.

Kevin VanDam did at the 2010 Bassmaster Classic.  He looked at the approaching weather, and the area he wanted to fish, and knew that the fish would come to him.  That by the end of the three day tournament, the bass his competitors had been feasting on for the first two days would filter their way to him; they did, and he took the win on the final day, with his biggest sack of the tournament.

Greg Vinson, a third year Elite Series pro from Wetumpka, Ala. said; “it’s called fishing ahead,” he said.  “Most people look at what’s happening now, how to catch fish now; they don’t plan for tomorrow, or event the next week; they need to look ahead.”

What is Fishing Ahead?
Vinson said that fishing ahead is defined as practicing the current conditions, with a mindset for what is coming in the near future.   “It is most critical in the spring because of the spawn,” he said.  “But it repeats itself again in the fall with the cooling temperatures.”

Fishing ahead in the spring requires anglers to always keep a thought to where the fish need to be.  The biological need to spawn mans that everything in the late winter to early spring is building toward the building of a nest, and the eventual depositing of eggs.  “They can’t avoid the need to spawn,” Vinson exclaimed.  “It is in their nature to get into the shallows when the time is right.”

What that means for an angler is that he must always keep one eye open for the migration that is coming.  They must remember that the bass will move up, usually in waves when the conditions are right.  “They’ll move up by the hundreds if things are right,” Vinson reported.  “I try to find fish in areas where I can see the path they are going to take to the shallows, and I do it by practicing backwards.” 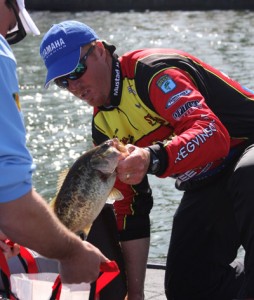 Start Shallow
The first place Vinson looks is in the bays that he believes bass will be spawning in.  “I look for hard bottom bays and coves that have signs of a previous spawn,” he said.  “I look for vacant nests, or hard bottoms with reeds or pads in them, then start backtracking.”

What he looks for are the first major pieces of cover, or a depth change outside of the spawning area.  “If I’m in Florida in January or February, then it will be grass mats,” he said.  “But in other areas of the country, it could be nearby deeper water, docks or brush.”

Since he is thinking about his tournament in the coming week, his search is only to find the caliber of fish he is hoping to find making their move.  “I may catch a few bass, but it’s only to see what kind of quality they are,” he said.  “I’m by no means looking to establish a pattern at this point; I just want to find the right ones.”

Once he locates a staging area that has good fish, can pinpoint the path they will take to the spawning area, and knows the conditions are heading in the right direction, he’s ready to take a gamble.

How to Catch Them
Once the tournament starts, and Vinson has his point A to B to C routes laid out, he goes about intercepting the bass. “I’ve got one of a few things that I’ll do to catch them,” he said.  “If there’s grass around, like in Florida, a lipless crankbait helps me cover those vast edges. Some of those areas aren’t visible to the eye, but you can follow them on a depth finder, and lipless crankbait covers those areas well.” 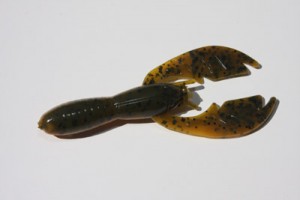 If they’ve moved in, but haven’t set up nests, Vinson has one of three setups at the ready.  “I throw a NetBait BK Shad swimbait on a Davis X-Swim hook, a NetBait Paca Swim Jig with a Baby Paca Craw trailer, or a Davis X-Wire Spinnerbait slow rolled,” he said.  “If they’ve not yet left the staging area, then I’ll flip them with the Baby Paca Craw on a 3/0 snelled straight shank hook with a Jethro Baits Tungsten weight.”

Of course, if they have established a nest, then it’s time to bed fish, and he said the Baby Paca Craw is his choice there.  “I like natural colors,” he said.  “I tend to watch the fish more than I do my bait, so it gives me the chance to avoid bright lures.”  The one thing h said he would do, if he needed to see the lure, is dip them in J.J.’s Magic for a little bit of color

For all but the flipping, he chooses Bass Pro Shops XPS Fluorocarbon line, but Stren Sonic Braid for flipping heavy grass.  He uses Carrot Stix rods, and most of the baits above, with the exception of the spinnerbait are thrown on a Shimano Curado 7.0:1 retrieve speed; he throws the spinnerbait on a 6.4:1 Curado. 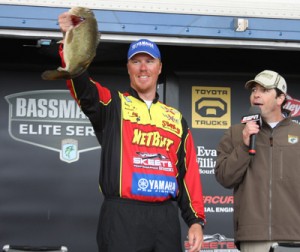 He said to pay attention to the conditions, that they will dictate fish movement through the area.  “If things are stable, they will usually continue moving to the spawn,” he said.  “But, if things turn nasty, they could pull all the way back to the staging area, you just need to be ready to do both.”

A Practical Example
Vinson said he fished a Bassmaster Southern Open on Lake Okeechobee in Florida a few years ago that played out perfectly for the fish ahead plan.  “It was the coldest that anyone I talked to could remember seeing in that area,” Vinson said.  “I found an area that had several dozen vacant beds, with a large grass mat outside of the area.”

When the colder weather broke for sunny skies and a warming trend, Vinson knew what to do.  “I threw my B.K. Swimbait around the edges of those mats and into the spawning area and finished in the top 10; it was a good week; especially for how brutally tough the tournament was.”

Don’t forget to look ahead, with a mind for what’s behind, and you too could improve your springtime fishing results.