A Dynamic Sponsorships Feature – Should Shane Powell be the Classic’s longshot underdog? – by Alan McGuckin

When Bassmaster.com released its annual Vegas-like odds of who will win the Bassmaster Classic, Southern Alabama’s Shane Powell was tagged as having the longest odds among all 55 anglers in this year’s event. 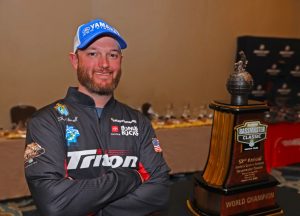 So, let’s take a deeper look at who the 32-year-old really is as both an angler and a man before we assume 100 to 1 odds accurately predict a bottom of the barrel finish for him this week on Hartwell.

“I didn’t see the story on Bassmaster myself, but I had two or three buddies tell me about it,” grins Powell. “I mean, I guess it doesn’t surprise me. The writers and editors don’t know my story like they know a lot of the other full-time Elite Series guys.”

That’s the epitome of the down-home humility people love of about Powell. Rather than be bitter or angry about the last place ranking, the former Auburn fisheries major, just grins and shrugs it off.

And Auburn is largely where Powell’s high-profile tournament career took off.

In college, he was actually the team partner of now back-to-back Bassmaster Classic Champion, Jordan Lee. In fact, Lee narrowly beat Powell in the College Series bracket back in 2013 to gain a berth to the 2014 Classic on Guntersville.

“I’ve reflected on Jordan beating me and getting the chance to fish in the 2014 Classic many times. But to this day he remains one of my best friends, and honestly, he was way more prepared to compete in the Classic than I was back then,” feels Powell.

But this isn’t 2014. And in the eight years since, Shane Powell has grown tremendously as an angler, and won way beyond six figures in tournament prize money, fishing mostly around Alabama.

Heck in just the past 18 months, he’s won over $125,000, and beat hundreds of absolute ‘hammers’ to qualify for the Bassmaster Team Championship Fish Off back in December through the Alabama Bass Trail.

“My dad’s good buddy, Ronnie Draughon is really the man who taught me how to bass fish. I grew up fishing shallow, but in recent years I’ve taught myself how to use Humminbird Live offshore,” says Powell.

“So even though this is my first time to Hartwell, chasing spotted bass around deep brushpiles is really nothing new to me. I’ve been doing it for years on Lake Jordan and Lake Martin back home. And if I need to move shallow, I’m certainly confident doing that too,” he explains.

An old soul and always humble, Powell, shares life with longtime girlfriend, Mary Frances and a chocolate lab named Finley. And he was certain not to appear too overconfident when asked to give a letter grade to how he was feeling about this Classic.

At first saying, “maybe a C, I guess” but soon after he reluctantly added, “I mean, I don’t wanna say an A and come off as arrogant or something, so maybe like an A- or B+.”

Odds makers take note, there’s your truest answer to whether Powell is likely to bring up the rear when the scales stop spinning at Bon Secours Wellness Arena on Sunday afternoon.

Plus, in addition to the hundreds-of-thousands of dollars he’s won in pure prize money the past few years, Powell has also cashed a ton of checks as a registered member of the Toyota Bonus Bucks and Yamaha Power Pay programs.

“Those programs just make good business sense. I’ve now bought two Tundras. They run forever, and I know that if I finish anywhere around the Top 10 in a tournament, I’m probably going to win the Bonus Bucks and Yamaha Power Pay money, because you don’t have to win the event to win those cash bonuses,” he says.

He’s right. And he estimates the Toyota Bonus Bucks program alone has probably netted him close to $12,000.

So, what would the 2022 Classic’s supposed greatest longshot do with $300,000 if somehow he shocks the world, or at least Bassmaster editors, and win this week on Hartwell, where he plans to lean heavily on a shaky head, swimbait, jig, and chatterbait?

“I’d certainly use some of it to fund my fishing, but mostly, I’d probably just buy some more rental properties around Dothan, and keep driving the same Tundra I’ve got now with 100,000 miles on it,” grins Powell.

Those are the qualities that make Shane Powell so easy to cheer for, like so many people back home in Alabama are this week.

And besides, doesn’t everybody love an “underdog”?