It’s only been nine months since Matt Arey was among the last two anglers standing on the Dickie’s Arena weigh-in stage in Fort Worth on championship Sunday of the 51st Bassmaster Classic. Waiting to see if his final 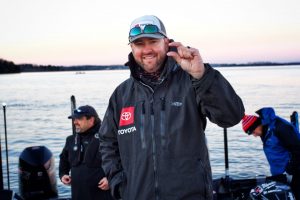 I remember seeing the always positive, perpetually smiling North Carolinian behind the stage after the trophy was hoisted and the confetti had fallen. Truth be told, he looked like he had been sucker punched in the gut. Like he had almost achieved a life-long dream, only to come up a couple of pounds short.

But after a few minutes, his wife Emily and his two daughters found him backstage, and you saw the smile come back across his face. In true champion’s fashion, the Team Toyota pro picked himself back up before the press conference was over and promptly had his sights set forward.

Instead of dwelling on the almost or stewing on a case of the what-could-have-been, Arey is using his second-place finish as fuel for the 2022 Academy Sports + Outdoors Bassmaster Classic presented by Huk on Lake Hartwell.

“After being that close to taking the Classic trophy home all I want to do is put myself in that position again,” Arey said. “Throughout practice this week, all I’ve done is look for the kind of fish I believe it will take to win this week. Honestly, that’s not really normal for me. Consistency and cashing checks with solid finishes has been one of the things I’ve prided myself on throughout my career. But this is the Classic… a solid finish gets you nothing here.”

A quick glance through Arey’s history on Lake Hartwell backs his statements up regarding consistency. Arey’s fished five Tour level tournaments on this fishery and has never finished outside of the money, with 11th place being his highest finish in 2016 and 35th place in 2014 being his lowest finish.

This year, Arey’s carrying some extra horsepower in his heart for a chance to win, like the increased horsepower the 3.5L V6 Twin Turbo engine has in his brand new 2022 Tundra. And it’s the near-miss of last June that’s driving this desire as he heads into his third straight appearance in the Super Bowl of bass fishing

“I got a little caught up in the lights and cameras, without focusing enough on the action during my first Classic in 2020,” Arey admitted. “Everyone warned me about that, but I thought it wouldn’t affect me since I had fished a lot of FLW Cups over the years. But I got caught fishing for “check fish” like I might during a regular season tournament.

“Last year on Ray Roberts I stayed committed to fishing for the caliber of bass I felt it would take to win and ultimately, I caught enough to put myself in that position. So, I’m taking the lessons learned and will do everything I can to find myself back in contention this weekend. It starts with not getting distracted by the Classic craziness and staying focused on the fishing.”