All I can say after the Sabine River is that I hope my score improves this week at Falcon Lake.

This is one of those weeks where I came away from the tournament feeling ok about what I did. I had nothing in terms of fish, and somehow I ended up making the cut. I’m happy about that, because that’s what this season is all about – fishing on Saturday.

But after I got to looking more closely at how I fished, and then especially after I applied the Saturday Scorecard system to my performance, I didn’t feel too pleased. I came away with a final score of 27, a week after scoring a 35 at the Bassmaster Classic. Lots of room for improvement.

Just for review, the Scorecard gives a rating of 1-10 on these areas of performance: finish position, decision-making, focus and composure, preparation and practice.

The area where I struggle the most is Preparation. It would seem like that would be an easy fix, but it’s not, and here’s why. I hate the “networking” part of our sport. I recognize how important it is, but I don’t like it. I don’t like the fact that anglers get a lot of local help, and in some cases the angler that hooks up with the best local information wins. 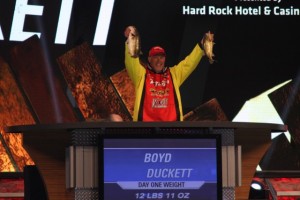 I’d guess some people reading this might conclude that I hate this aspect of our sport because I’m not good at it. And maybe that’s true to a degree. But the other part of it is that I would rather we all go to an event with no help at all.

Some anglers refuse to get help. Aaron Martens, for example, doesn’t seek help and seldom pre-fishes. I don’t know anybody in our sport better at finding fish than Aaron, but he finished 85th at the Sabine. At this event, you needed some help.

Anyway, here’s the scorecard for Week 1 of the BASS Elite Series.

With what I had to work with the first day, I liked the fact that I caught 3 pounds, 9 ounces. It doesn’t matter what the weight is; it matters if you catch them when you have to. It’s about movement. I started out in a bayou where I found good fish in practice. But they were gone, for me and a most of the rest of the field. So I moved and eventually caught some weight. On Day 2, I went a conservative route, heading for an area where I knew I could catch small fish. I did that and caught enough weight to make the cut. On Day 3, I gambled. There was a chance that I could catch fish in an area that would include a 160-mile round trip. After choosing to play it safe on Friday, I ended up 44th. So I chose to not play it safe on Saturday. I went for the long run and the chance for bigger bites. My logic was: I could only fall six places, but I might jump 15 to 20 if I hit a productive area. It didn’t happen, but I’m ok with me choice. Still, I waited a little long to make some choices, so I docked myself points.

I was calm, pretty focused, and made adjustments on the second day. I was disappointed in Sunday because I ran a long way and they didn’t bite. I think I could have been a little more focused while I was there. I never had the feeling that I was about to catch one. I ran out of options, and that weighed heavy on me. I also got distracted by the sheer number of local anglers on Saturday. 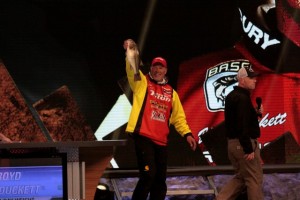 I didn’t have some knowledge that a lot of other anglers had going into this event. For example, there was a refuge that opened up just before the tournament. I didn’t know about the refuge. I’m still wondering how some anglers knew about it and others didn’t. I also didn’t know that about 50 percent of the water in Louisiana was private. You just couldn’t fish it. It’s crazy, but it’s true. I was lost as to which were private and which were public. I give myself a bad score because I came in at a disadvantage.

Practice just was not as good as I wanted. I’m not making excuses, but I was actually sick all week. It was a terrible cold, one of those things where your body aches and your energy is gone. I ground it out, but it was uncomfortable. As a result, I just didn’t practice well.

Got to do better than that.