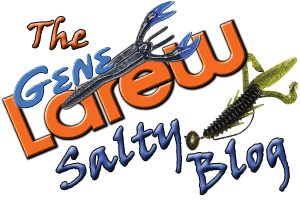 So who really determines the best use of a new fishing lure, the manufacturer or the anglers who use them?

Officials at Gene Larew Lures say that regardless of the original intentions behind a new design, it’s the fishermen who usually get more creative when putting baits into action. They say the company’s Salt Flick’R is a perfect example, with three fishing guides in three states fishing the same bait right now but in different ways.

The Larew Salt Flick’R is a 6-inch stick-like bait with two appendages for swimming action near its front. It weighs nearly one-third more than any other similar soft plastic lures of its size to make it sink faster. Designers made it to be rigged and fished on a round jighead in a technique called “dragging,” but knew it would also be a great free-falling bait when rigged without a weight.

Both applications are quite different than how longtime bass guide Dannie Golden is successfully fishing it daily with his clients on Texas’ Lake Ray Roberts at this time. He is fishing the heavy plastic lure on a Carolina rig. 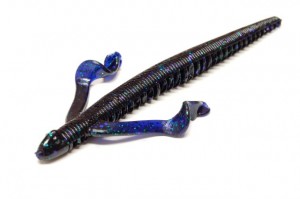 “As most bass fishermen know, a Carolina rig usually features a bait that floats or suspends on a 3- to 5-foot leader behind a good-sized weight being dragged on the bottom,” Golden explained. “But playing around one day we rigged the Salt Flick’R on a Carolina rig and it’s been our best option ever since for these early summer conditions on Ray Roberts. I think it’s because the bait’s weight does make it ricochet off of obstacles along the bottom and dart around like real baitfish. It’s definitely getting bass’ attention.”

Golden said he’s mostly targeting old roadbeds with the rig, using his electronics to look for any type of change in them at depths of 8 – 15 feet, but isn’t afraid to go as deep as 30 feet. His Carolina rig features a 3/4- or 1-ounce worm sinker, with a drop leader behind it of about 3 feet in length. Colors of choice have been those with green hues for the lake’s moderately clear water, with green pumpkin/chartreuse pepper being his personal favorite.

“Anyone who spends as much time on the water as I do knows that lure color definitely makes a difference. I’ve seen it too many times to think otherwise,” Golden said. “With where our fish are right now, I’m confident we can catch them this same way through August.”

Carolina rigging the Salt Flick’R is different than what full-time guide Ivan Martin is doing with the bait on Oklahoma’s Grand Lake at this time. Martin, who was instrumental in the bait’s design, is indeed dragging the Salt Flick’R on a 1/4-ounce round jighead with a light wire hook, fishing it on spinning tackle.

“We’re catching 35-40 largemouth a day by dragging our baits on pea gravel points in main creeks on the south end of the lake, focusing on depths of 8 – 12 feet,” Martin said. “We’re getting lots of two to three pound fish, but this rig will also catch big ones when you’re around them. If you see shad popping in a creek, head to the windy bank and start fishing.”

Terry Blankenship guides on Missouri’s Lake of the Ozarks. He said the lake’s bass are just now getting where he likes for them to be for the entire summer: in the brush piles. One of his preferred techniques is to rig the Salt Flick’R weightless and weedless and let it sink right into the nastiest part of the cover.

“The Salt Flick’R has kind of a pointy head, much like a worm weight, and I think it helps it come through brush better than a lot of lures will. I rig my hook Texas style right through the nose and skin hook it into its back. I think the vibration ribs on the bait’s belly make this a ‘noisy’ lure as it climbs over branches and things.”

Blankenship said most of his lake has brush around its thousands of boat docks, so they are always a good place to start. He looks for docks with lights on them, knowing they attract baitfish overnight.

“Anytime you have bait, bass are usually nearby. While bass may move deeper during the day right now, I’ve actually found they move up and stay shallower when the water temps kind of stabilize for awhile beginning mid-July or so,” Blankenship added.

None of the three guides were surprised by the others’ successes while fishing the same bait differently. Perhaps Blankenship summed it up best though when he said, “The only thing crazier than bass are bass fishermen. Think we’re going to read instructions on how to fish a lure? Probably not.”