Editor’s Note: The fishing world has been fortunate over the past several years to have some strong competitors come from the B.A.S.S. Nation community of anglers.  Each year, five anglers qualify for the Classic from The B.A.S.S. Nation Championship, and there have been some truly quality people that have shone on the brightest stage. 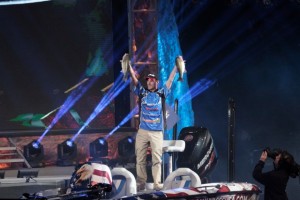 In 2011, Brandon Palaniuk burst onto the scene and became one of the sports brightest bright spots.  This year, Paul Mueller from Connecticut came within a pound of doing what his fellow statesman, Bryan Kerchal managed to do in 1994; he almost won the Bassmaster Classic.

In 2013, the Eastern Qualifier from Maine, Jonathon Carter impressed the crowd with his composure as well as his fishing skills.  Carter finished 17th, and has since left his full time job as an elementary school teacher to pursue a career in fishing.

In light of it being a year removed from his Classic, we wanted to find out from someone who was there as a first timer what it was like to be on that stage.  We asked Carter to tell us what it felt like, and what the experience was like as a whole.

Here is his story.

In 2013, I competed in the Bassmaster Classic at Grand Lake. Since then I’ve had amazing opportunities to talk with anglers from all over the country.  The one thing that almost every single person asks is, “What was it like to fish in the Classic?”

Two things always run through my mind when that question is asked. The first is, the Classic blew away all my expectations!  It was far bigger, more exciting, and fun than I could have imagined! 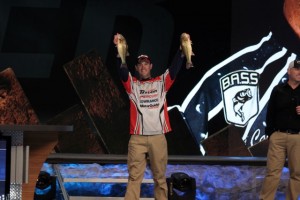 The second is a feeling I’ll try to describe.  It’s that feeling that I had as a child at Disney World.  The sense of magic and energy that makes you want to live in that moment of time forever, leaving you amazed at the experience and struggling to keep it from passing.

As a first time qualifier from B.A.S.S. Nation, I had no idea what to expect.  Strangely, I wasn’t nervous at all.  In fact, on the water, I was more relaxed than I ever have been.  It is the behind the scenes part of the Classic that I was slightly worried about.  I didn’t want to look like a fool in front of the guys I see on TV every weekend.

I found out quickly that the legends of the sport are just as excited to be there as I was.  During a tour of the stage, I took out my phone to answer a text.  Skeet Reese was standing next to me and said with a sly smile, “Taking a picture?”  Not even on the water yet, and I already looked like a rookie.  When I told him, “No, just answering a text”, he laughed again and said, “Well, why not? I am!” Even the guys who have been there a dozen times still get swept up in the energy of it all.

It’s a good thing the Classic creates that energy, because it is also exhausting.  Besides all the meetings, sponsor obligations and events, as soon as you leave the stage you’re ushered off to a media room for interviews.  I was blessed and did pretty well, so sometimes I didn’t leave to go back and finish my tackle prep until 7 or so.  Then it’s back to the hotel, do some phone interviews and grab what you can for food.  By 11 o’clock I was setting four alarm clocks that would jolt me awake by 3:00 AM to head to the launch. 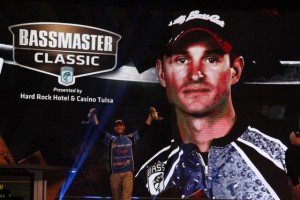 Being on the water was the most relaxing part of the whole thing… you know, except for the fact that you’re fishing in a completely life changing event. That becomes clear when you’re getting passed by KVD’s armada of spectators.

I had my loyal three or four, one of which was a john boat who didn’t dare venture too far from his house, making me the most convenient angler to watch.  There’s no feeling like catching your first fish of the Classic, though.  Relief that you won’t zero and knowing it’s a start. Better yet was the five pounder on my next cast that didn’t even have a hook in her.  The jerkbait was wedged across her mouth!  That’s the way day one went!

Waiting in the tunnel that first day was probably the most nervous I was all week, but as soon as I was in front of that crowd, the nerves all vanished.  It was unbelievable pulling two big fish from my well and hearing the crowd go nuts!      That’s a moment we all dream of! It’s the memory that has me obsessed with returning. The one that has me putting all I have into my dream.  The one that keeps me dreaming, that the next memory will be me holding that trophy in front of the crowd.