Gerald Swindle on the Edge 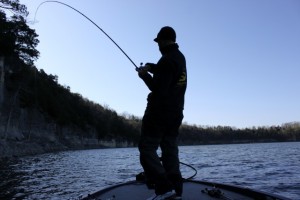 There’s little doubt that the competition level on the Bassmaster Elite Series is over the top.  The Elite Series is a tour stacked with relentless anglers going above and beyond to keep themselves at the top of their sport.  at their level, there is a constant effort to keep both their mind and body at peak performance levels.  Yet at the same time, stay on top of the evolving world of fishing tackle and marine electronics.

Well-known, Warrior, Ala. pro Gerald Swindle; who is known for his outgoing and often humorous personality, is also known as a hammer no matter where he launches his boat across the country.  From coast to coast, Swindle knows what it takes to compete on one of the nation’s best and most prominent bass tours.

There is no denying that anglers who work hard and pay close attention to new baits and trends will gain an edge on the competition.  In Swindle’s eyes, the newest and flashiest of baits are critical to getting bites, but it’s the terminal tackle that puts the weight in the livewell.

“I pay as close attention to the bait’s components, as I do the actual bait, both need to be at their best to succeed day in and day out,” claims Swindle, referring to the terminal parts of his favorite baits.  “Eagle Claw’s Lazer Sharp and TroKar lines cover everything I need to keep my edge!”

It seems to be a common mistake for anglers that focus so much attention to the baits they are buying but don’t give a thought to the weight or hook that accompanies it.  Eagle Claw; a staple in American made tackle, has been producing some of the most reliable products on the market for decades. 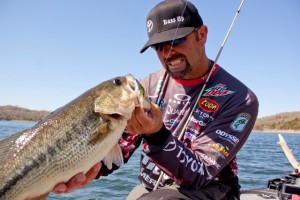 Ask Swindle what his favorite TroKar hook is and he’ll happily tell you that what he uses the most, might not exactly be his fondest.  “Hands down I use the 4/0 TroKar TK130 Flippin’ Hook the most; I use it for almost all my pitching needs,” he said.  “I like them all, but my fondest just might have to be the 4/0 light wire TK110 EWG Worm Hook.”

This should come as no surprise.  After all, it was the hook Swindle used to sack up close to 31 pounds of bass the first day of the 2011 Bassmaster Southern Open on Florida’s well-known, Lake Toho.  This was an event he would later go on to win and punch an early ticket to the Bassmaster Classic.

Swindle used the TK110 EWG Worm Hook to Carolina rig a Zoom Trick Worm over shell beds that scattered the outside weedline that surround the shallows of Lake Toho.  His ability to make long casts and stay back off the hole; yet still get a good hook set in the strong mouths of those behemoth Florida Strain largemouth, pushed him past the competition and assured him the top spot against a stacked field.   That would become Swindle’s first B.A.S.S. win, and as stated before, his first ticket to the 2012 Bassmaster Classic.

About the Author – Josh Douglas is a professional angler and fishing guide who specializing in electronics training. When not on the water, he enjoys sharing his passion of bass fishing through numerous outlets including his personal website, www.JoshDouglasFishing.com.