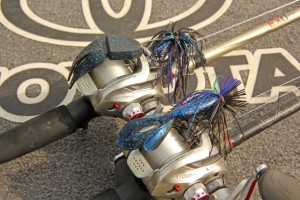 Twelve hours after losing by ounces at the Bassmaster Elite Series event on Lake Dardanelle, Gerald Swindle sat in a booth with his best friend and wife, LeAnn, at the Russellville, Arkansas Waffle House.

He talked about how cool it was to see his ride-along Marshall’s hands tremble with excitement during the 40-minute flurry of keeper catching madness they shared in the tournament’s final hour the day before. In the wake of heartbreaking defeat, Swindle still laughed, and even talked about more serious matters like the importance of having a true sense of God-fearing accountability in life.

Swindle is heartbroken, but not bitter. There’s a big difference. He knows the number of blue Elite Series trophies he wins won’t define his life.

He also knows a ton about jigs, and the soft plastic trailers he hangs on their hooks, more specifically, when to hang them from the hook, versus when to thread them up the entire hook shank.

“Threading a trailer up the hook shank versus hanging it from the bend of the hook is pretty much all about what profile you’re trying to achieve, and that relates mostly to water color and fishing pressure,” explains the 2004 Toyota Bassmaster Angler of the Year.

When Going Big, Tip It

“Ninety percent of the time, if I’m pitching or flipping a ½ ounce jig, I want a bigger profile, so I’ll just tip it, as opposed to threading it on there,” says Swindle. “By tipping it, you’re adding length to the jig, giving it a bigger profile, and in stained to muddy water, that’s important.”

Swindle’s favorite trailer in this situation is a Zoom Big Salty Chunk in either black with blue fleck, or sapphire blue. “For example, at Dardanelle I was pitching into gnarly cover like thick cattails, and real thick water willow vegetation on the shoreline, and at times you couldn’t see 2” deep because the water was so dirty from the rains we had – that’s when the big profile is really important.”

When to Thread Instead 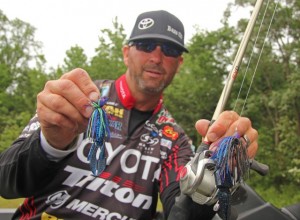 G and His Jigs with Trailers – photo by Alan McGuckin / Dynamic

“Always thread your trailer up the hook shank if you’re skipping a jig around docks, because if you tip it it’s gonna turn-over on the hook and mess up your skip,” says Swindle, known as one of the best dock skippers to ever launch a boat. His favorite trailer to thread on his jig when skipping docks is a simple one: a plain green pumpkin Zoom Fat Albert twin tail.

“I thread the trailer on the hook shank when I’m using a smaller, more finesse-style, compact jig – and typically I use a smaller jig if I’m pitching down a bank behind somebody, or fishing around more sparse cover,” he explains.

“Like at Dardanelle, from time-to-time, I would encounter some really thinned-out emergent water willow vegetation on the shoreline, and I’d go to the compact jig with that Z-Hog Jr threaded on the hook shank,” reflects Swindle.

For bulkier large profile jigs tipped with a Zoom Big Salty Chunk: 25-pound Sunline fluorocarbon line, a larger 7’ 6” Quantum EXO rod, and again a 6.3:1 Quantum Tour Mg reel. “A lot of guys want the faster 7.3:1 reels to pitch with. Not me. I’m amped-up enough as it is, and besides, you can tow a bass out of heavier cover way better with a bulldozer than you can a sports car, and that 6.3:1 reel is geared more like a dozer. Not to mention, it’s still plenty, plenty, fast enough to pick up slack line when the bite occurs.