Learning from the Pros by Marshalling – by Pro Angler James Watson 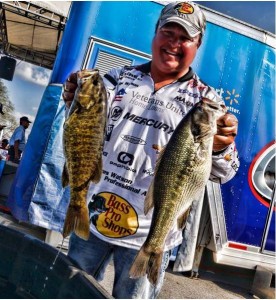 In the ultra competitive business of professional bass fishing you have to do all you can, legally, to get an edge. You are competing against the greatest anglers in the world. These guys are the best of the best; the cream of the crop. They have proven themselves time and time again. To perform against these guys on the same playing field you have to put your time in and earn it. You have to put in years of work to be a better fisherman. Like any professional sport you have to practice, study, and then practice some more.

At this level, you have to take advantage of being able to learn new techniques before anyone else does. You need to find new fishing lures that haven’t been presented to the fish over and over again. You’ve got to research and study the Internet on how to fish a jig better or how to get a crankbait to move a little better. It takes a lot of work to figure out what makes the guys who are at the top of the standing so good. 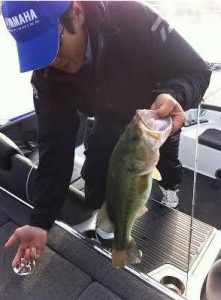 Being a great fisherman is about many things, but one of the most important is the on the water decision making process. Figuring out what the fish are doing and why they are doing it. The guys who can do that consistently are the best fishermen day in and day out. Those guys research their prey and understand why they do what they do. When you can understand the ins and outs of fish behavior it makes it easier to catch them. The marshal program allows me to sit in the boat and watch the decision making process in action.

Typically, I don’t marshal at lakes I already know. I marshal at lakes I’ve never been to or lakes I have very little experience on. It’s a chance to learn what to expect before I actually have a tournament on it in the future.

I’m not there to learn fishing spots. I’m there to learn how to navigate the lake. Or to try and figure out what areas of the lake are more productive and try to understand why that area is more productive. It helps me prepare for what kind of cover a lake has or how bass behave on a certain body of water.

We only get three days to practice for an event. For me, that is not enough time to figure out a new body of water. A pro will spend a majority of that practice time figuring out how to run the lake. If I’ve marshaled on the lake, it will eliminate the time I have to dedicate to learn the lake and gives me more time to figure out the fish.

I get to watch the best fisherman use different techniques that I might not know much about. I also learn new ways to fish lures I already use. Things like how to be a better deep-water fisherman or how to fish a crankbait better. 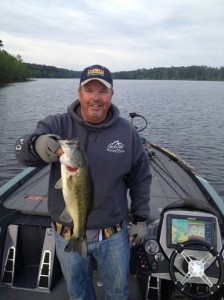 The co-angler program is good if you want to compete and catch fish. The marshaling program is different. With being a marshal my full attention is focused on the pro. I’m not worrying about trying to catch fish behind him. I also know that he is not worried about me catching fish behind him. He is laying it all on the line to do all he can to win.

I spend 260 days on the water and for a few of those days I don’t have a rod in my hand, I’m in training mode; Training to be a better fisherman. It’s like being able to play catch with Brett Favre, or playing horse with Lebron James. Most businessmen would love the chance to spend a day with a guy like Donald Trump and see how he reacts to different business situations. That’s what it’s like to spend a day on the water with guys like Takahiro Omori or John Crews.

Another aspect that has really helped me is that I realized these guys are a lot like me. It has really humanized some of the great fisherman in my mind. When on the water they have the same stresses and same worries that I have when fishing a tournament. They wonder why they didn’t catch a fish on that spot and what does it tell them when they do catch one. When I’m fishing and I’m worried about not catching them I know they are wondering the same thing.

I grew up idolizing these guys. In my mind they catch five-pounders on every cast. By being on the boat with, them in the heat of competition, I realize they are not super human. They are fisherman just like me.

At first, I was a little self conscious about being a marshal, but I knew I needed to get better and I knew this is a great way to learn. I put aside my pride and focused on what my ultimate goal was; to be the best fisherman I can be. I have a lot to learn and this is a great way to get firsthand knowledge. 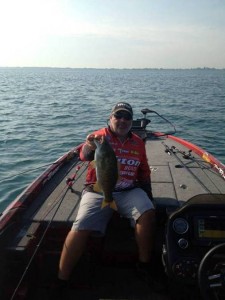 The guys I’ve marshaled for have been great and they all think it’s a great idea. Many have even said they would do the same thing if they had the ability to do it. I have the time and the means to be able to handle the extra travel. My business partner at Realty Executives, Dave Holbook (an army buddy), helps run the business so I don’t need to be in the office a significant amount.

Since I know most of the guys I’m marshaling for, I know when to ask questions and when to stay silent. As is my nature, I like to have a few good laughs while on the boat with them. When I marshaled for Morizo Shimizu I was telling him lies about my good buddies Tommy Biffle and Jeff Kriet. I had him in stitches laughing so hard.

Another funny experience I had was when I marshaled for Jason Christie. When we were loading up that morning he told me he was on some good fish on a special spot. I’ve competed against him for years and we often travel together. So I know him pretty well and since he is a Cherokee Indian I call him “The Indian.” Well, we pull up to his first spot and there is a totem pole in the front yard where he was catching them. He proceeds to whack’ em! I told him only an Indian could catch them from this spot because it must have been sacred ground.

You fishermen who constantly ask what do you have to do to become a professional fisherman. I have your answer. You have to study hard and practice often. Learn your profession as best you can and take advantage of every opportunity to get better.

The Elite Series marshal program is a great opportunity to learn directly from the pros; that’s why I do it.