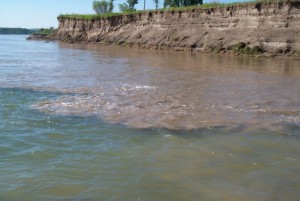 It never seems to fail.

After weeks of working overtime to get a weekend off during some of the year’s best prime time fishing, the weather man seems to delight in dashing carefully laid fishing plans with an ill-timed curveball tossed to a chomping at the bit bass angler.

And a muddy curveball, at that.

That pitch is often of the sucker punch variety, a sweeping hook brought on by pounding rains, howling thunderstorms winds, and plummeting H2O visibilities that muddy things up at your favorite bass water.

It happened earlier this year when severe storms and torrential rain enveloped Alabama as the nation’s top bass pros gathered on Lake Guntersville to slug it out for the 2014 Bassmaster Classic title.

The result was muddy water mess and fishing conditions that were less than optimal during the year’s biggest tournament.

Unless, that is, you happened to be eventual champion Randy Howell who took the Classic’s lemons and made sweet angling lemonade.

A similar scenario happened in drought plagued Texas a couple of weeks ago when an area of fierce thunderstorms assaulted Lake Fork on the eve of the Toyota Texas Bass Classic.

That stirred the water up, reduced visibility in the shallows, and knocked off what had been a tremendous shallow water bite throughout the event’s pre-tournament practice period. 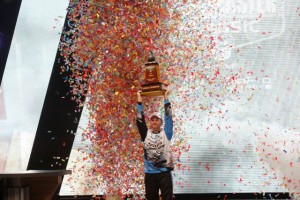 While the offshore bite survived at Fork for anglers like eventual champ Keith Combs to mine with great success, the dingy water didn’t help those looking to catch five heavyweights in water measured in mere inches rather than feet.

So how does an angler go about combating a sudden appearance of muddy, storm tossed water on his favorite springtime fishing hole?

“One of the biggest mistakes I see people making with muddy water is mentally throwing in the towel,” said the guide based out of Quitman, Texas.

“They show up at their favorite spot and either leave without fishing or they don’t fish with much enthusiasm because the water on that day doesn’t look like it does in the magazines.”

Even if the fish that they might catch still do.

So what changes when muddy water rolls in? Woodruff says it isn’t the location to look for fish at this time in the month of May.

“The location stays basically the same as prior to the rain event or the same as traditional areas that work well during this time of year,” said the Orvis endorsed guide who actually specializes in fly fishing for Fork’s double-digit bass (www.flyfishingfork.com; 903-967-2665). 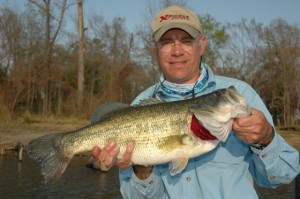 The truth be told, Woodruff is actually a highly respected, knowledgeable and consistently successful bass guide on the famed East Texas lake, annually guiding clients to big bucketmouths that tip the scales in the 10-pound or better range, all on the more difficult to fish long rod.

What’s more, his bass angling wisdom works for both long rod enthusiasts and for those who prefer to catch their bass by conventional tackle means.

So what does an angler do when a storm stirs things up during late spring?

Often, bass at this time of the year are still caught very near where they’ve spawned, even if there’s new inflow the consistency of chocolate milk somewhere nearby.

“Watch the side coves and pockets on creeks,” said Woodruff. “They may stay clear for quite a while after a big rain.

“Shad and other baitfish will seek out this cleaner water while they can. And if they find these spots, you can rest assured that the bass will too.”

Are there areas to avoid after a big rain?

Yes says Woodruff, a two-time finalist for the Orvis “Guide of the Year” award.

“Yeah, it’s usually a good idea to avoid areas with heavier current that is flowing in, areas where there is flooded debris floating, and spots with foamy water and such,” he said.

So what does change with the sudden appearance of muddy water? In some cases, what you’re actually fishing with.

“Lure selection – or in my case, fly selection – is the main thing that changes,” said Woodruff. “I like to use highly visible flies with the most visible colors in stained water being fluorescent orange, fluorescent red, chartreuse and black.

On the conventional side of things, Woodruff says the old fire tiger selection is a great color choice.

The next thing that the Fork guide wants to do is give the bass some commotion to home in on. 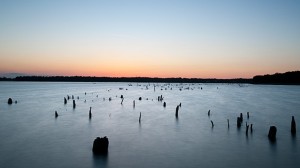 “Noise and water displacement are important factors for a fly to have in muddy water, so I’m often throwing patterns that are topwater based, have rattles embedded in them or have curly tails tied into the fly that will push a little water,” he said.

Conventional tackle – lures such as spinnerbaits with big blades that throb or crankbaits that have rattles buried within – accomplish the same thing in giving bass something to hear or in creating water displacement that fish sense with their lateral lines.

In addition to using visible colors and adding noise and a “push of water” to his fly selection, Woodruff is also going to challenge muddy water conditions by altering the way that he fishes such patterns.

“When I’m retrieving a fly, I try to do so with a consistent cadence so the bass can predict there it will be as they move towards it,” said Woodruff.

By doing so, Woodruff says a fish will have ample time to either see his offering, hear it, or sense its location before the fly – or bait – moves out of the fish’s strike zone.

A final recommendation by Woodruff is for an angler to fish with a slower retrieve in such conditions.

“One of the bigger mistakes that people make when fishing in stained conditions is to fish their offering too fast,” said the Texas A&M University graduate.

While fly fishing for big bass isn’t everyone’s cup of tea, Woodruff’s fishing wisdom is applicable for both conventional anglers and those who thrill to catching bucketmouths on the long rod.

By adjusting the guide’s advice to lure selection, proper presentation, and the right location, the result can be the bucketmouth of a lifetime.

No matter kind of stormy curveball the local weatherman wants to throw an angler’s way.