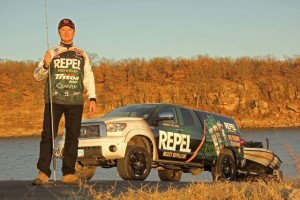 Weatherford, Tex. –  February 10, 2014 – In preparation for his 30th appearance in the Bassmaster Classic – the grandest stage in professional bass fishing – veteran pro Gary Klein, a two-time Bassmaster Toyota Angler of the Year winner, reveals his newly redesigned website at www.garykleinproangler.com.

Klein said that his new website, and his active involvement in social media, reflects his desire to keep pushing himself to learn more and improve. “I am still on a path to be the kind of angler I want to be,” said the Weatherford Tex. pro.  “I am passionate about learning, about competing and in helping other anglers become better at what they do.  For me that means continuous education and reinvention; the new website and interaction with fans on social media is a part of that.”

In August, Klein earned his 30th Bassmaster Classic entry; another highlight in an already legendary career, by finishing 35th in the points standings in the 2013 Bassmaster Elite Series.  Klein will also earn another career milestone during the Bassmaster Classic in Birmingham, Ala.  He will join a select group of anglers who have eclipsed the $2-million-dollar mark in career B.A.S.S. earnings.

With all of that legacy behind him, one might think that and angler would be ready to ride off into the bass fishing sunset; not him.  Klein credits the technological advances and opportunities of the sport with keeping him hungry.  “Our sport keeps evolving with great equipment, boats, motors and electronics that make me want to learn,” he said.  “I also love working with tremendous corporate partners like Repel that make me want to prove myself in competition and promotionally every day.”

While he expects to continue on his path toward angling excellence, he said that he knows what the sport has meant to himself and his family.  “I started this journey 35 years ago in 1979, and the sport has been so good to Me, Jana and our daughters that I owe it the respect to continue trying to improve daily,” he said.  “I have goals that I want to accomplish, and it starts in February at Lake Guntersville when we get to the Bassmaster Classic.”

About Gary Klein
A veteran of more than 350 Bassmaster tournaments, Gary Klein is the 1989 and 1993 Bassmaster Angler of the Year.  He has won eight B.A.S.S. events, finished in the top 10 77 times, qualified for 30 Bassmaster Classic appearances and claimed nearly $2-million in Bassmaster earnings.  He has also won two FLW events, finished in the top 10 11 times, qualified for six Forrest Wood Cups and earned an additional $450,000 in FLW events.  He is a past U.S. Open Champion and a founding member and president of Major League Fishing.  He resides in Weatherford, Tex. with his wife Jana and their daughters Lakota and Kanyon.