What a difference a day makes. The cold, dark and cloudy wind-blown day that was yesterday on Lake Conroe gave way to a classically gorgeous post cold front, sun drenched morning on Saturday at the Toyota Texas Bass Classic.

Mike McClelland never got the big off-shore bite on Day 1 that Conroe is famous for, but â€œPee Pawâ€ as his close angling friends call him, based on his mature-beyond-his-years slow moving demeanor, is hell-bent to call up a hog today after catching a small 12 pound limit yesterday that has him sitting in 28th place.

Today is a college football Saturday, and McClelland admits he tunes-in just about every time his home state Razorbacks are on TV. But today while Arkansas takes on Vanderbilt, itâ€™s a tournament day in Texas for the well-liked pro from Northwest Arkansas. So, today, McClelland will be calling hogs with football jigs rather than cheering for oblique shaped pigskins. 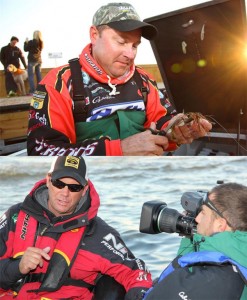 â€œI caught a ton of bass here at Conroe yesterday, I just never got the big bite, â€œ said McClelland, who sat with scissors trimming the skirt of his jig. â€œThereâ€™s nothing better than dragging a football jig along the bottom, bumping into a brushpile, feeling your line go slack, and knowing a big one just ate it,â€ he grinned.

â€œWhen football jigs entered the modern age with a weedguard worthy of dragging them through brush, that was about the same time I won the Bassmaster Elite on Grand Lake, Oklahoma with the technique,â€ explained Mike, who followed his angling son Justinâ€™s advice and bought a Toyota Tundra last year.

Speaking of slow dragging, thatâ€™s about the way KVDâ€™s soul feels right now. The worldâ€™s most dominant angler rarely slows down, but only getting to spend eight days at home in the past two months is soulfully dragging him down.

Weâ€™ve often wandered if VanDam is truly human. This morning, as he pulled nine Quantum combos from the rod locker, while simultaneously talking on the phone to his wife and twin 14-year-old boys, we received confirmation that he is.

VanDam, is not only the most dominant angler in the sport, but also a sponsorâ€™s dream based on his humble demeanor and â€˜canâ€™t say noâ€™ work ethic. So the cameras never turn off, and the commitments never seem to end. But even pro bass fishingâ€™s most invincible armor is wearing thin as 2011 finally nears an end.

â€œMy boys are hunting with their Uncle Russ today,â€ said Kevin. He didnâ€™t have to explain that while grateful for Russâ€™ willingness to stand in the gap, as a dad who loves his boys, heâ€™d rather be standing in the autumn woods with Jackson and Nicholas himself.

â€œI donâ€™t want anybody to think Iâ€™m complaining â€“ Iâ€™m not. Itâ€™s just been pretty insane lately and Iâ€™m ready to get home. Iâ€™ll get home for four days after this event, and then I have to leave again. But once that trip is through, Iâ€™m staying home to spend time with my family,â€ said VanDam. And who could blame him? Itâ€™s just heart. And indeed, heâ€™s only human.

â€œTo live the way I do, dream the dreams I dream. So far away from you. I got three days to wash the road off my soul.â€ â€“ Texas country music artist, and T.T.B.C. performer, Pat Green.