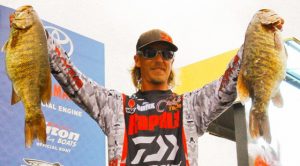 Talking about winning hook, line and sinker – literally. Rapala Pro Seth Feider dominated the 2016 Bassmaster Angler of the Year Championship, winning on Minnesota’s Mille Lacs Lake with a drop shot set-up comprising a VMC hook, Sufix braid and fluorocarbon and a VMC tungsten weight – all tackle within the Rapala family of brands.

Feider’s victory was a win for the home team, and in more ways than one. Not only is Feider based in the Twin Cities metro area, located a mere two hours south of Mille Lacs, so is Rapala’s U.S. headquarters. So the huge crowd of fans cheering Feider’s win Sunday included a large contingent of friends, family members and Rapala staffers.

Winning the tournament with a three-day total of 15 smallmouth bass weighing a combined 76 pounds, 5 ounces – more than six pounds better than the runner-up – Feider targeted big boulders, locating fish on his depthfinder and dropping straight down to them. Each element of his drop shot rig was key to his victory, he says – fish didn’t shake his Neko hook, his Sufix fluorocarbon leader allowed his bait to fall fast, and his cylindrical VMC weight prevented time-wasting snags.

Patience was a virtue as well. Having spent almost three weeks on Mille Lacs last fall, Feider knew that the resident smallmouth are both “fat and lazy” and must often be annoyed into biting. That meant fishing almost exclusively straight down for fish he could see on his sonar screen – rather than fan-casting in all directions around his productive areas.

“It’s almost like bed fishing, you know,” he explains. “I just kind of kept it in their face long enough they were like, ‘I’m going to eat you so you get out of my face.’”

He waited out one bass – which would prove to be a six-pounder – for more than five minutes. “I saw him and I dropped to him, and then I backed off and I was sitting there shaking it forever,” he recalls. “I went back over him with my graph and I could see him sitting there, so I backed off again. About a minute later, he bit.”

After VMC unveiled the Neko Hook earlier this year, Feider began using it for both Neko rigging and wacky rigging. “Then I had such a good landing percentage on it, I decided to use it as my drop shot hook for smallies.”

“The diameter gauge on it is perfect, it’s super sharp and it’s got a little offset bend to it,” Feider says. “I’m using super-light line – I can’t jerk on those fish real hard. I can just lift into them and then that hook’s sharp enough and thin enough, it goes right through their lip. Then I back the drag off and let them swim around until they can’t fight anymore.”

He rigged his hooks throughout the tournament with a 4-inch soft-plastic stick bait. “I don’t think it mattered to the fish,” Feider says. “It wasn’t like I dropped down and they ate it right away. The fish are so fat and lazy. There’s literally a crayfish every 12 inches, so they don’t have to swim anywhere to eat anything.”

“The stuff I was fishing was really snaggy,” Feider says. “So if you use a ball there, you’re going to get hung up all the time and you’re losing weights. It’s just not a very efficient way to fish.”

A ½-ounce weight keeps his bait in a fish’s face, he says. “And I’m not putting a lot of tension on it,” he continues. “I’m almost kind of dead-sticking my bait. I’ll check on it every once in a while to see if a fish has grabbed it.” He attaches his weight to the end of a 12-inch Sufix fluorocarbon dropper.