The first morning of the 2011 Toyota Texas Bass Classic didnâ€™t see a sunrise. Instead, dogs shivered, cold winds blew, and fans bundled beneath layered clothing as 50 of the best bass pros in the world readied for the first day of competition on historic Lake Conroe, which is currently seven feet lower than normal.

With gusts out of the north strong enough to straighten the flag in horizontal fashion for Casey Ashleyâ€™s awesome rendition of the national anthem, indeed morning-take off was cold. Still, it couldnâ€™t ice sentimental thoughts from the warm hearts of Terry â€œBig Showâ€ Scroggins and Gerald Swindle.

Scroggins sat kneeling on his boatâ€™s front deck, tying on custom painted crankbaits, when his thoughts turned to a legendary lure maker and angler back home in warmer Palatka, Florida. â€œI got to visit with Bobby Ditto the other day,â€ said Scroggins in heartfelt fashion, referring to the legendary soft plastic worm innovator whose health is a struggle these days. 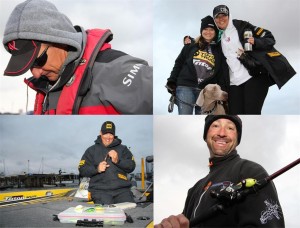 â€œNo matter where I go in the country, people want to talk about the Baby Gator Tail worm that Bobby invented,â€ said Scroggins. â€œBut what most folks donâ€™t realize about Bobby is that he was the one who pioneered off-shore structure fishing in Florida. For example, he realized that a simple drop in depth from five to six feet, could make all the difference in the world in holding a school of bass. And he didnâ€™t have side-imaging sonar; he did all that with a flasher. When Bobby Ditto was in his prime, you couldnâ€™t hardly beat he and his wife in a tournament around where we live,â€ added Scroggins, pridefully.

Just down the dock, stood Scrogginsâ€™ Team Toyota teammate and close friend Gerald Swindle, cracking jokes of course, but also seeing lifeâ€™s big picture, before heading out to fish for $150,000 in cash and prizes. On the arm of Swindleâ€™s wind blocking Simms jacket was a unique piece of embroidery. â€œThatâ€™s a replica of the tattoo I have on my arm,â€ said Swindle with prideful appreciation.

No, Swindle isnâ€™t big on tattoos. Never thought heâ€™d have one. Then again, he never thought heâ€™d bury his brother Tony at the age of 42 following a battle with pancreatic cancer. Tony and Gerald were close. Real close. Team fishing partners, who paid entry fees through wages they earned pounding nails together in the family house framing business. â€œMy friend Minoru at Lucky Craft had that custom embroidered on my jacket for me after I got the tattoo on my bicep in memory of Tony,â€ explained Gerald. Itâ€™s Swindleâ€™s only tattoo. And itâ€™s hard to argue the goodness of the epidermal ink featuring a cross and the initials T.L.S. that will forever tie bass fishingâ€™s funniest man to the fishing buddy heâ€™ll forever miss the most.

As for the fishing, always-classy Gary Klein uttered confident hopes amid the shivering morning winds. â€œThis time of the year, youâ€™d expect them to be piled up and fairly easy to catch,â€ said the long-time Quantum pro. â€œI think maybe a lot of us have missed them in practice, because you have to fish so, so slow to find them,â€ speculated Klein. â€œIâ€™ve got three spots that I think I can do well on. Like a dummy though, I set the hook one time in practice and the fish weighed 7-pounds. Thatâ€™s not one you want to hook in practice,â€ lamented Klein, who actually lived on Lake Conroe for three years back in the early 1990s.

As the 50 top pros idled out for take-off, a local angler named Jeff made a prediction from beneath a bundle of camo and blaze orange deer hunting clothing. â€œIâ€™ll be shocked if we donâ€™t see a 9-pounder or better caught today.â€ A bold prediction it seemed on a morning shadowed with big grey clouds and cold north winds on a lake that is seven feet low. Then again, this is a famed historic big bass factory known for producing double-digit bass, and a field of anglers fueled by talent â€¦ and driven by heart.