Swimming a jig has become en vogue on the pro tours the past several seasons.  The combination of a 30-degree fine wire hook, a silicone skirt and a curly tailed trailer have become the standard for catching bass around the country. 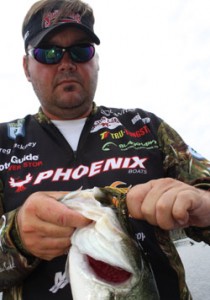 The swim jig came to prominence on the clear water impoundments of the Midwest.  The clear water and suspended bass forced anglers to come up with an approach that would create a response from those bass that wouldn’t chase spinnerbaits or jerkbaits.

The result was a series of medium to medium-heavy rods with light tips, 12 to 14-pound fluorocarbon lines and pearl white jigs and trailers designed to mimic shad.  Anglers would make long casts past floating docks, standing timber and other dock pilings trying to draw strikes.  The technique basically became like throwing a spinnerbait without the blades.

Other areas of the country soon adopted the technique.  As fishing pressure increased, the need for more of a finesse approach became necessary, and the swim jig craze was born.  Anglers were soon catching bass from coast to coast on the 1/4 to 3/8-ounce jigs.

Not swamp rat Greg Hackney, he went the other way – he went Power Swimming.

What is Power Swimming?
Power Swimming is at its nature the cousin to the swim jig technique made popular in the clear water of the Midwest.  However similar, it is the cousin from the wrong side of the tracks, the heavyweight brawler to the quick footed middleweight fighter.

Power Swimming is Hackney’s answer to covering water in shallow water.  While most swim jiggers are looking for shad eaters, Hackney is looking for slung jawed bream eaters, and his approach requires his unique heavy handed form of bass justice.  “I’m not looking for shad eaters when I’m power swimmin’ my jig,” said the Gonzales, La. pro.  “I’m looking for that big ol’ bream eater up there in the shallows, and when she eats, I want to make sure she comes in the boat.

His approach to swimming a jig is shallow, fast and heavy; it requires heavy line, big hooks and stout rods, which is ironically what his hookset requires as well.  Hackney is known to “go unconscious when a fish bites” as he puts it, and his bone jarring hookset not only moves the boat, it’s been known to shatter even the highest quality equipment. 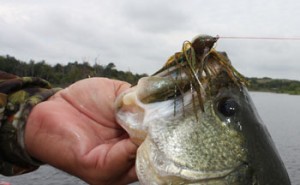 Despite the heaviness of the gear, and the choice of lure weight, Power Swimming is made primarily for shallow areas, and Hackney believes it gives him an advantage on big, tournament winning bass.

Power Swimming Gear
Hackney’s choice for Power Swimming Gear is heavy all the way around.  He starts with his signature Hack Attack Jig from Strike King, and most frequently, he employs the 1/2-ounce size.  “I’ve found that big fish seem to take a heavy jig in harder and deeper than a light one,” he said.  “My experience is that they have to commit to take it in, and that helps me set the hook better.”

He uses his signature 7’2” Quantum Tour Hackney medium-heavy casting rod and a Tour Edition Burner reel with 7.1:1 retrieve speed and ties the lure to 50-pound-test Cajun braided line.  “I want to make sure that I handle them when they bite, and my gear is set up to handle abuse,” Hackney said.

The Hack Attack jig is built on an enormously stout Gamakatsu hook that was originally designed for saltwater applications.  Hackney said that his hook helps whim land more fish.  “This is a hook that was made for setting the hook like you’re mad at ‘em for bitin’” exclaimed the Elite Series pro.  “This thing won’t flex, it penetrates really well and doesn’t let go once it’s got ‘em.” 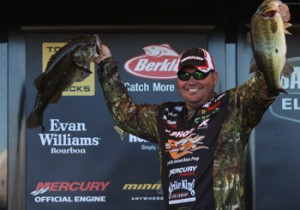 Hackney said his favorite choice for Power Swimming trailers is a Strike King Rage Craw.  His approach requires the lure to ride high in the water, silhouetted against the surface, and the Rage Craw does that.
“The trailer helps keep the bait up in the water,” he said.  “It’s got great action and really helps make sure they find it.”

Where and How
He looks for obvious ambush angles to present his jig to, and he makes pitches and roll casts to them, being mindful not to make a big splash in the shallow water.  “You want the lure to enter softly, so that it surprises them,” he said.  They can be pretty skittish in shallow water.”

Hackney said he looks for shallow water that has grass submerged under the water, or pads and brush that he can swim it through.  “I want the cover to help me make the lure show up in front of them in a hurry,” he said.  “I throw it past grass clumps, pad clumps and brush and bring it over and through it to make them bite.”

Once his lure is in the water, Hackney holds his rod tip up in the air to help keep the bait up.  He uses the speed of his Burner reel to trigger the strike.  “They don’t make a reel fast enough to outrun a bass that wants to eat something,” said Hackney.  “A lot of the time, it is that high speed retrieve that makes them react, and when they do, they have to take it immediately, which means positive hooksets.” 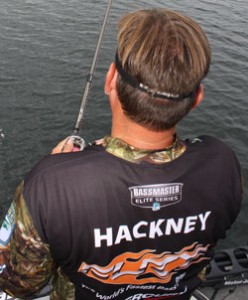 When it comes to his swim jig hookset, Hackney said it is different than his standard Flippin’ jackhammer jawbreaker.  He said anglers need to feel the fish, and let the rod and line do their jobs.  “I want the rod to start loading before I pull,” he said.  “If I drop slack and try to hammer it, I often miss them, this is a tight line sharp sweep that pulls the hook into their mouth; it’s all that’s needed when they eat it so hard.”

He also said that Power Swimming is very visual because of the shallow water, and cautioned anglers to feel for the time to swing.  “The fish has to turn with the bait, and I need to allow them a chance to do that,” he said.  “If I react when I see the swirl, I’ll miss them, but if I wait to feel them on the line, then I connect.”

What Colors?
Because he is fishing for bass that chase bluegill, he chooses colors that mimic bluegill.  “I like our Candy Craw Okeechobee Craw, Bama Craw and Summer Craw in clear to lightly stained water,” said Hackney.  “If the water is dirty, or the conditions are dark, then I’ll go with Green Pumpkin Craw, Sexy Craw Texas Craw or Black and Blue if it’s really dirty.”  He chooses trailer colors that match the jigs he is throwing.

Hackney said he chooses not to go with a white jig, for two reasons. “I despise white jigs, mainly because so many people throw them as swimming jigs,” he said.  “The other reason is that I want the bream eaters, not shad chasers; I can’t stress that enough.”