Mike McClelland is a jerk.

No, he’s not a bad guy; he’s a fan of jerkbaits, especially in cold water.

“Jerkbaits give me opportunity to catch bass that other anglers pass by,” said the Bella Vista , Ark. pro. “Jigs are great, as are shaky heads, but when there are groups of fish suspended in the water column; a jerkbait is the way to go.”

Most anglers envision the typical jerkbait pattern as bombing down the shoreline frantically snapping the rod to make a lure dart and flash crazily. That type of retrieve is reserved for when bass are in a frenzied state, manically chasing anything that swims and crashing clouds of bait from several feet away. That’s not the type of approach McClelland is referring to. 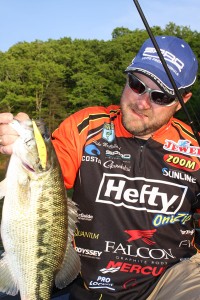 When the water is cold, the six-time B.A.S.S. winner relies on a much more subtle approach that relies on a perfectly balanced lure. “In cold water, the bait has got to almost perfectly suspend,” said the 43-year-old angler. “If it does anything when I pause it, I want it to slowly creep toward the bottom. The fish are not aggressive, and something that leaves their strike zone is going to get ignored.”

McClelland chooses his signature SPRO lures based on two factors, the depth of the bass, as well as the predominant baitfish. “If the fish are in the five to seven foot range, I choose the McStick, which has a slender, minnow shaped body,” he revealed. If they are in deeper water, say up to eight or ten feet, I’ll go with the McRip and its shad shaped profile and deeper dive lip.”

He said that his first consideration of bait choice would likely be the type of baitfish the bass are feeding on, but he has to take depth into consideration. “If they are eating blueback herring or some other long slender minnow, I’d choose the McStick,” he said. “But, if they are keyed in on shad, the McRip would be my choice, but I have another factor to consider.”

His McStick is more of the traditional jerkbait, with a slender body, a short angled lip that helps push the bait to a max of around seven feet. Meanwhile his newer bait, the McRip has more of a shad shaped profile with a deeper lip that helps the bait run to around 10 feet and a little deeper with the right setup.

Where to Look?
Aside from the obvious need to locate baitfish in an area, McClelland said that his first choice in the winter is to locate areas that bass can make short moves, and quickly change their comfort level. Being an angler who grew up fishing many of the Midwest’s Ozark Lakes , McClelland looks for bluff walls next to deeper water; he also looks for areas that hold other bass holding cover.

“Bluff walls are the kinds of areas that bass can move up shallow to feed, then turn around and be deeper in seconds,” said McClelland. “I also look for banks that have deeper docks on them, and if they are near a channel swing, then they are even better.” 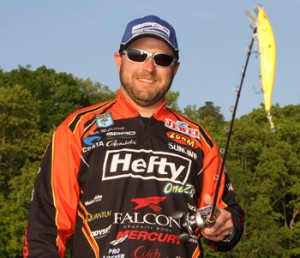 Bass will suspend at different depth levels around vertical structure and cover, so they become natural spots for bass anglers to target with jerkbaits. “If I can make a long cast parallel to these steeper banks, I maximize my time in the strike zone,” McClelland explained. “My only task at that point is figuring out what cadence I need to use on my retrieve to trigger strikes.

Triggering Strikes
Most jerkbait bites in the winter come when the lure is hovering, so making sure there is ample time for a bass to respond is important. “You can completely over power a retrieve in cold water, especially if you are trying to move really quickly,” McClelland opined. “It’s important to figure out how to move the bait, and how long to pause it to trigger strikes.”

While most anglers use a short snap of the rod to activate a jerkbait, McClelland said that more of a subtle pulling action is his standard starting point. “ I begin my retrieve by winding the bait down eight to ten turns of the reel handle to get the bait into three to five feet of water then I pause for five to ten seconds,” he said. “After that initial pause to allow the bait to settle into the right position, I methodically pull the bait forward with the rod tip one to three feet. Following that motion, I pause the bait again for ten to twenty seconds before twitching the bait again.”

McClelland said there is a good rule of thumb to follow for the length of the pause between pulls. “The colder the water, the longer the pause should be,” he said. “Experiment and find what works for you on any given day. Once you find the cadence that creates a response, perform this retrieve all the way back to the boat on each cast.” 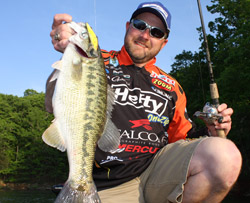 Making Adjustments
McClelland is meticulous about finding exactly the right presentation that will draw the strike. He said it is an area that most anglers often overlook. “Most anglers get a lure out of the package, read that it is a suspending lure and start fishing,” he said. “I don’t care how good they are, no bait is made perfectly for every situation.”

Whatever bait he has chosen to use in the late winter, McClelland studies how it reacts at the side of the boat before he makes a cast. “After I tie the bait on, I set it in the water next to the boat and see what it does,” he said. “If it sinks too fast, or floats to the surface, I make adjustments. Remember that cold water is denser than warm water, so making a bait suspend is easier.” 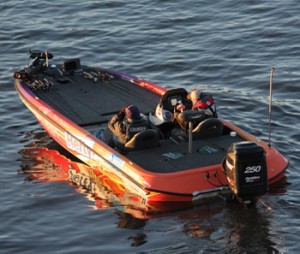 If a bait floats, McClelland adds weight, if it sinks, he subtracts it, and the process could happen multiple times a day as the water temperature warms. His bait surgery is less complex than one might imagine. If a bait floats, I will make one of two adjustments. I can upsize the front hook of the bait to a size four, or I can merely attach a couple of split rings to the eye of the front treble hook, he said of his two levels of adjustment. “These simple modifications allow for quick, on the water adjustments that can make the fishing day more effective.”

McClelland chooses to avoid stick on weights, and the reason to me is cosmetic. “The colors on baits today are too good and I don’t like to ruin them with lead tape when I can place a larger hook or split rings to add the necessary weight.”

What Colors?
There are basic rules that he uses for making color choices. “If there is a little tint to the water, I like one with a little flash, so a Chrome Shad, Clown or Old Glory would be best,” he said. “If the water is clear, then I go with a translucent color like Spooky Shad or Clear Chartreuse.”

He did reveal that his favorite color; if he was allowed to only choose one would be Blue Bandit. “That’s been my best producer across the country.”

There are times when bass seem to key in on crawdads in the early spring, and a new color in the McRip is one he likes for beating the bottom. “Watermelon Red Craw gives anglers the chance to have the aggressive nature of a jerkbait, but will also get the attention of the bottom hugging crawdad eaters at the same time,” he said.

Equipment for Jerkin’
He likes a rod with a light tip, but has enough backbone to handle hooked bass. “I use a 7′ medium action Falcon Weightless Worm rod, and believe it or not, I typically use a 5.1:1 retrieve Quantum Tour Edition PT in the early spring,” he said. “I learned long ago to use the reel speed to slow me down, a faster reel can make me pull the bait out of the strike zone too quickly.” 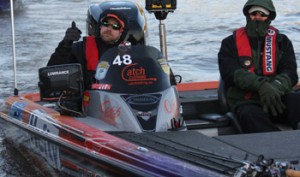 While many anglers favor fluorocarbon lines with jerkbaits for the response and for added feel, McClelland chooses the buoyancy of monofilament because it helps the bait during the pause. “In the springtime when I’m looking for the bait to suspend, I use eight to ten-pound-test Sunline Super Natural Monofilament,” he said. “Super Natural floats and has a tendency to kind of parachute the lure, keeping it from falling as the bait is paused.”

He said that bass will tend to strike the lure as it is suspending, so he said it is important to watch the line. “It’s similar to fishing a jig or worm on the bottom,” he said. “The line might jump a little, or just twitch on the surface, or it might start swimming away, so you must pay attention to catch fish that strike on the pause.”

Grab a couple of jerkbaits, and get out there and see if you can become a jerk too; just like Elite Series pro Mike McClelland.