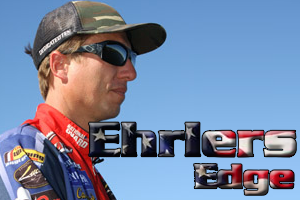 The last couple of weeks have been pretty busy ones getting ready for the second stop on the FLW Tour and doing a few seminars.

From there I flew to Phoenix where I stopped at Cabelas for Abu. Phoenix is a great place and there are lots of good anglers in the area that come up with some great questions. It’s always great to share fishing information with people who are as passionate about the sport as I am.

Last week was the Bassmaster Classic and Kevin VanDam did it again. It’s hard to believe in a field of angler that could that one person can be so dominant. It looked like a fun tournament with lots of different fishing styles available. I would have liked to have been there mixing it up with my Lucky Craft 1.5 square bill crankbaits. I hear from others often how they think I am a finesse angler. Sure I like to finesse fish when its necessary, but my favorite technique is the shallow running square bills and that seemed to be the ticket at the classic. Could have been fun!

For me its of to Arkansas and Beaver Lake. Beaver Lake is an interesting place to fish because the fishing can be great in bad weather and horrible in good weather. Which might be a problem this week as its supposed to rain during prefish and be nice during the tournament. This one could be tough. In 2009 I had some success on Beaver Lake and finished in 10th, but in 2008 I finished in 54th place and back to 2007 I finished in 50th exactly. All three tournaments I made the check line and that’ll be the goal again this week.

One interesting note about fishing Beaver Lake is the smallmouth rule there. It’s actually against the rules to weigh in a full 5 fish limit of smallmouth. This really shouldn’t be a problem as there aren’t many smallmouth in the lake, but should an angler find a smallmouth bite they would also have to find a way to catch 2 spotted bass or largemouth each day to fill their limit. I know that played into the tournament when Andre Moore won the event in 2005 he would catch 3 smallmouth and then run and catch a couple of smaller spotted bass in order to fill the limit. No matter how it works out it’s fishing so it will be fun!