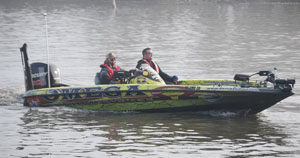 Unlike the other competitors in the top five, Derek Remitz openly admitted after the official practice day that he was unsure as to what he had actually found.  He pre-practice had produced few bites and even less confidence.  Remitz reported spending much of his practice time in Bayou Black and some of his practice time in Lake Cataouatche.

His four day practice period in the week prior to the Bassmaster Classic produced a total of three quality bites.  “I caught some smaller fish in canals and other areas,” said Remitz.  “But, nothing I did made me feel any better about the tournament starting because I didn’t know what I was going to do.”

In fact Remitz hadn’t even decided where he was gong to fish when Bassmaster emcee Dave Mercer called his boat number. “It was a 50/50 deal for me,” Remitz said of his decision.  “I was struggling with whether to go to Bayou Black or not when I hit the fog and decided to go to Cataouatche. I had one weigh point in there so I just decided to go there.
That decision turned out to be a fortunate one, as Remitz would find himself square in the middle of one of the more remarkable Bassmaster Classics in the history of the event. 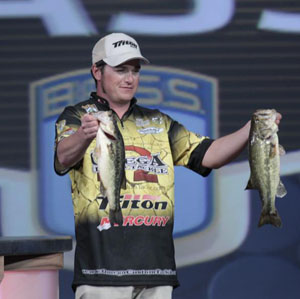 Practice
Remitz reported having a terrible practice, he said that he only managed a few bites, and was not expecting to have a top five finish in the tournament.  “There is not much to say about my practice,” said Remitz.  “Other than to say that I knew I would be fishing a crankbait.  I spent four days on the Delta and hadn’t really figured too much out other than the fact that the water was warming and the fish were going to be making a change.”  That change would play right into his livewell.

His official three day pre-practice round included literally one bite.  “I spent two days of my pre-practice in Bayou Black, and the final day in Cataouatche,” Remitz said.  “My only bite came in Cataouatche, so I kept going back there the final day to see what the water temperature was doing.”  Even with the improving conditions, he was still unsure what he would do.

Tournament Day One
like the other competitors, Remitz had to fight through the emotions of being delayed by the fog.   Being ready to launch for the Bassmaster Classic, only to be delayed by the conditions can lead to mental breakdown.  “I had to fight to stay focused early on day one,” said Remitz.  “It would have been easy to let my thought process get away from me while we were waiting.”

Once they were cleared for takeoff; he had a decision to make.  After hitting the fog bank and deciding to go to Cataouatche Remitz picked up his St. Croix Premier Glass cranking rod and Shimano Curado reel with 7.0:1 retrieve.  The combo was spooled with 16lb test fluorocarbon, to which he tied a Bull Bream Lucky Craft RC 1.5 crankbait.
Remitz knew that the area was full of stumps and quality grass that would likely hold the type of pre-spawn bass he was searching for.  All he had to do was locate them and make them bite.  He did that by fan casting the crankbait throughout the area. 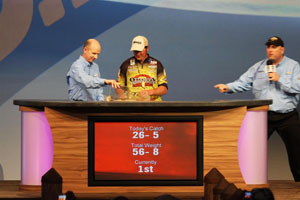 “I started looking at the way things were laid out when I found areas of grass that hadn’t been picked clean by the coots; I concentrated on these areas,” Remitz reported.  “Where the grass was healthy it seemed the bass would congregate in that area, mainly around the stumps.

Remitz admitted that he got in a little bit of a hurry on the first day in his need to locate fish and he didn’t give himself a chance to catch as good a sack as he could have;  he weighed12 pounds, 15 ounces and finished the day in a tie for 22nd place with Matt Herren.” I caught eight or nine keepers on the first day,” he said.  “It took me a while to figure out that I needed to slow down, and I think it cost me in the end.”

Tournament Day Two
As the second day commenced Remitz had started becoming more familiar with the area and he started recognizing particular stumps that would produce the better quality fish and how he needed to fish them to generate strikes.  “By then I’d figured out that I needed to reel the bait as slowly as I could,” said Remitz.  “I needed to make repetitive casts and bump the stump from as many different angles as I could.”

His newfound approach enabled him to catch a five and a five and a half pounder early on the second day, and the pair of big fish in the livewell of his Triton helped him settle into fishing mode.  “Those two fish helped me relax,” he said.  “I had my limit by around noon, and was able to cull up a little in the afternoon; I caught 10 or 12 keepers that day.”

His day two performance produced a weight of 17 pounds, 4 ounces; bringing his two day total to 30 pounds, 3 ounces. It also brought with it a move to sixth place in the standings, and added excitement to go fishing the next day.

Tournament Day Three
Being in the top six starting the final morning was somewhere Remitz would not have forecasted for himself at the beginning of the week.  However, his position gave him a sense of purpose, and a strong desire to get on the water. 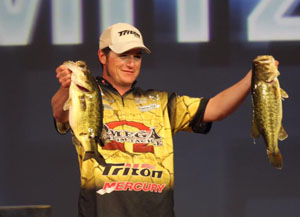 “I woke up in the morning champing at the bit to go fishing” said Remitz.  “Having spent so much time in there I had really gotten to know the area and how I needed to generate strikes. Plus with only having a half hour fog delay we were going to get a full day of fishing in for the first time in the tournament.”

He said that one of the reasons he was excited was because he would finally get a chance to go after the early bite; something he had not been able to do because of the fog.  When he got to his water on the first day, he made the most of the opportunity.

Remitz said at one point during the day he went by eventual Champion VanDam and one point and they shared how much fun the day was.  “We both said we couldn’t believe how good the fishing was,” said Remitz.  “I was just really happy to be there when things got really good; which wouldn’t have happened if I ran to Bayou Black.”

His final day produced a 26-pound, 5-ounce limit, which pushed his final three day weight to 56 pounds, 8 ounces.  His final day push elevated him to third place in the standings.  “I was happy with the fact that I ended up in the right place,” he said.  “I just wish I would have slowed down a little on the first day; I don’t know if I could have caught VanDam, but I would have challenged Aaron (Martens) for second place.” 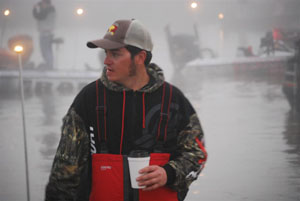 Keys
Remitz said there were two factors that made a huge difference for him.  The first was the water temperature climbing in Lake Cataouatche.  “When I went in there on Sunday’s final pre-practice day, the water temperature was 43 degrees,” he said.  “By the final day of the tournament it was up to 68 degrees; more than a 20 degree difference in a week, and the fish responded.”

Even with the breezy conditions on the final day, Remitz used an important tool to allow him to slow down.  “I’m really glad I put the Power Poles on my Triton,” he said.  “I could put them down and really hold the boat in position.  Without them, I wouldn’t have been able to make multiple casts and really pick apart the cover; they were a huge difference on the final day.”