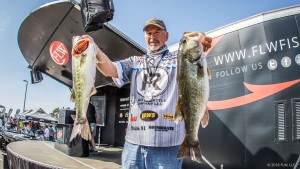 ANDERSON, S.C. (March 17, 2016) – Oklahoma pro Darrel Robertson, brought a five-bass limit to the scale weighing 20 pounds, 6 ounces Thursday to grab the early lead after day one of the Walmart FLW Tour at Lake Hartwell presented by Evinrude. Right behind him in second place is Jamie Horton of Centerville, Alabama, who weighed in five bass totaling 19-12. Robertson now brings a 10-ounce lead into day two of the four-day tournament that features 168 of the world’s best anglers competing for a top cash award of up to $125,000.

“I’m very blessed to have caught what I did today,” said Robertson, an eight-time Forrest Wood Cup qualifier. “It’s kind of a junk fishing deal out there, but I like it.”

Robertson said he spent his day concentrating on a specific set of spawning pockets on the lower-end of the lake. He said he caught two of his stringer fish – including a 4-pounder – sight-fishing off of beds.

“I knew what pockets to enter and which to avoid,” said Robertson. “I caught a limit of bedding fish, but they only would’ve weighed around 12 pounds so I knew I needed to mix things up.

“Earlier this week I had dialed in on some big bass that were cruising in these pockets,” Robertson continued. “I threw a worm on a drop-shot rig and a shaky-head jig and was able to catch three more good ones to put me at 20 pounds.”

Robertson said that his game-plan for the remainder of the tournament is to use as much of the lake as possible.

“Tomorrow I’m going to run up north near Seneca and try something else,” said Robertson. “I’m hoping I can get 15 pounds. I’ve just got to keep moving.”

The top 10 pros after day one on Lake Hartwell are:

Jeff Gustafson of Keewatin, Ontario, Canada, earned the Big Bass Award on the pro side Thursday, weighing a 6-pound, 14-ounce bass to win the $500 prize.

The top 10 co-anglers after day one on Lake Hartwell are:

Brian Billett of Elgin, Illinois, earned the Big Bass Award on the co-angler side Thursday with a fish totaling 6 pounds, 6 ounces to win the $250 prize.

Ranger pro Tony Dumitras of Winston, Georgia, withdrew from the tournament prior to the start of the event due to personal reasons. Dumitras will re-join the Tour next month at the Walmart FLW Tour at Beaver Lake presented by Jack Link’s, which is being held in Rogers, Arkansas, April 14-17.

Anglers will take off and weigh-in on all four days of competition at Green Pond Landing located at 470 Green Pond Road in Anderson at 7:30 a.m. each day. Weigh-in on Friday will begin at 3 p.m. Saturday and Sunday’s final weigh-ins will begin at 4 p.m.

Fans will also be treated to the FLW Expo on Saturday and Sunday from noon to 4 p.m. at Green Pond Landing prior to the final weigh-ins. The Expo includes interactive games, activities and giveaways provided by FLW sponsors, and the opportunity to interact with professional anglers to learn more about the sport of fishing and other outdoor activities. All activities are free and open to the public.

Also for youth, the FLW Foundation’s Unified Fishing Derby will be held at Chris Taylor Memorial Park located at 5 Jim Ed Rice Circle in Anderson on Saturday, March 19, from 9-11 a.m. The event is hosted by FLW Foundation pro Cody Kelley along with other FLW Tour anglers, and is free and open to area youth 15 years of age and younger and Special Olympics athletes. Rods and reels are available for use, but youth are encouraged to bring their own if they own one. All bait is provided by the DMF Bait Company.

The tournament is hosted by the Anderson Convention & Visitors Bureau.