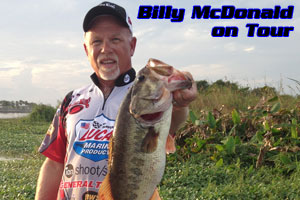 I thought I would give a little follow up on the Lake Okeechobee FLW event.

Practice was pretty random, and I really can say I didn’t have the best practice. I had one decent day, so I then went back and just tried to build up on that there in the tournament.

I ended up finishing 48th for the event, but it started a little better than that. I was actually 33rd first day, mostly because I had a big kicker fish that weighed right at 7 pounds; which was my first fish of the day, and the best bite I had since I’d been there, so it was good way to start that thing off.

Basically, I fished outside the Monkey Box out there; just a little bit north of where Brent Hite was fishing. Ironically, he won the tournament doing the same type of thing I was doing, fishing scattered grass out there. We fished lots of eel grass, hydrilla with some pepper grass scattered inside of it. I really think those fish seemed to be spawning out there, you couldn’t really see em’ but you could find the holes when it slicked off and it got all bright and shiny.

Most of my fishing was with a speed worm out there, that’s how I caught most all my fish; with a magnum speed worm. I was throwing it on a Dobyns 766 with Lew’s Super Duty reel, with 65-pound-test Seaguar braid. I was just reeling it really slow, not a burn type situation at all. Most of my bites actually came when I moving it real slow just keeping it swimming through there. It really turned out to be a good tournament, good way to start off the year.

I ended up leaving there and took off to Lake Hartwell to ride around most of the day and then the storms were coming in. I was not wanting to get trapped in ice and snow and stuff there for a week, so I headed back home.