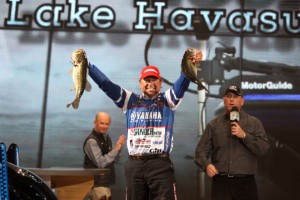 For the most part, Rojas has performed well on bass fishing’s biggest stage. In seven of his 13 trips, Rojas has finished in the top 15. He came his closest to winning in 2004 on Lake Wylie, when he led going into the final day, but like the rest in the field, succumbed to the hard charging Takahiro Omori’s last minute heroics; he finished fourth overall.

2015 would mark his second time in the top five in his career, and in this year’s event, he would come out strong, lead the event on day one, hold on to second place on day two, then see a few other anglers come from behind with very strong days to overtake him despite his strong tournament.

Here is how the whole thing came together for the four-time B.A.S.S. winner.

Pre-Practice
He said before he went to the lake, he followed the water levels on the Internet to try and keep up to date on the conditions. He said that he knew the water level at Lake Hartwell was higher than when his Skeeter / Yamaha teammate Alton Jones won in 2008. “I used the Internet to keep up with conditions and the water level,” he said. “I had an idea that it would rise, so I knew that I would have to focus on deeper water; especially if it stayed cold.” 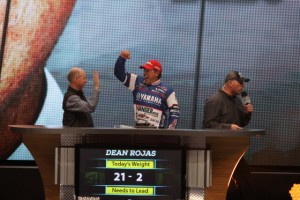 For his pre-practice trip, Rojas spent two days on Lake Hartwell in December, prior to the lake going off limits. He said that he knew other anglers were spending twenty or more days on the lake, but he felt that spending too much time would give him too much to think about.

“I really wanted to find the areas that I knew I could count on in the tournament,” he said. “I spent two full days focused on two thirds of the main lake trying to dial it all down to the depth, the type of fish and specific areas that would help me come tournament time. I’ve learned how to try to be efficient after all these years, and I just find that it’s better for me to be on the water a little less and just pay attention to the water levels.”

He left having made the decision that he was going to have to focus on deep water in order to have a chance to win the tournament. 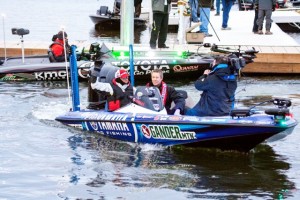 Official Practice
Once they were allowed back on the water for the official practice days, Rojas said that he started his circuit of areas, he was able to find out that some of the spots he had counted on weren’t going to be any good, but the overall area would produce for him as expected. “I found that the fish had left some of the spots I had found in pre-practice, and others were still good, but I just had to fish them a little differently,” he said. “I was encouraged because what I was finding was that I had most of my areas to myself; I wasn’t seeing any competitors there.”

He refined his area to approximately 20 miles from the takeoff spot at Green Pond. But said that he was moving between five or six creeks and that he had all but narrowed his approach to five rods and four techniques that he would be using. He had a pair of generic football jigs ready, on a 1/2-ounce and the other a 3/4-ounce in brown black and purple with a watermelon candy Big Bite Baits double tailed grub for a trailer. He had a 4.5-inch hand-poured worm on a dropshot rig and a Shaky Head for deep fishing, and his lone shallow water bait was a finesse swimbait rigged on a 1/2-ounce Revenge Swimbait Head. 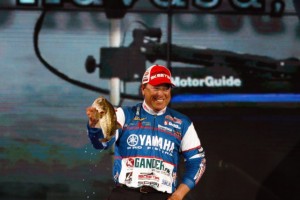 “I knew the deep bite was going to be the best way to have a chance to win, so I went out to focus on that altogether,” he said. “I spent the bulk of my time out deep with the exception of trying to look for a big bite on the last day.”

Day One
Like every other angler in the field, Rojas waited the hour and a half for the safety delay of the launch due to the extreme cold. However, because he was late back on the official practice day on Wednesday because he had not yet changed the clock on his Lowrance to Eastern Time Zone, he returned to check-in 28 minutes late. He was also going to be delayed an additional 28 minutes sitting in the penalty box before he could go fishing.

None of that seemed to matter. Rojas went out and caught a four pounder on his second cast with a Shaky Head, produced eight keeper bites in total and culled up one time about 1:30 in the afternoon on the 1/2-ounce jig. “I had the whole area to myself, and the conditions were perfect for the way I practiced, and planned to fish the event,” he said. “The sunny conditions put the fish on the offshore stuff and the deep docks exactly as I’d planned, and I hit them right.”

His day produced the heaviest limit of the tournament. A 21-pound, 2-ounce limit, giving him a one-pound lead over Skeet Reese for the day. 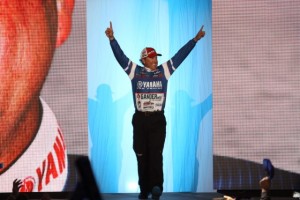 Day Two
If day one was perfect for the way Rojas planned to fish, day two turned out to be a grind. The cloudy conditions seemed to move the quality fish away from the hard objects he had located them on, and made for a very long day. “I felt really good to start the day,” he said. “Because of the delays, I only got to fish about half of my stuff, so I thought it was going to be a good day. But, the big bites that came on day one, just never came.”

He cycled through every one of his planned fishing holes and even though time was on his side, he only managed to get five bites all day on the Shaky Head and finesse worm. He was able to land all five, and although he only brought 10 pounds, 7 ounces to the scales, he sat two ounces behind Takahiro Omori in second place. “I knew I was in position, I just needed to figure out how to make the bigger ones bite again,” Rojas exclaimed. “It was a much different feeling than on the water, because at one point, I really started to feel like I was going to get creamed out there.”

Day Three
The final day brought a changeup to how he approached the day. While he started out trying to finesse fish into striking, he looked at the warming conditions and went straight to the docks thinking some of the bigger fish would have congregated there. After 30 minutes without a bite, he decided it was time to gamble. 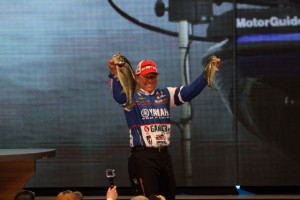 He picked up the swimbait and spent two hours covering water – without a strike. So, with almost three hours of the day burned, he picked up the finesse gear again and managed to pick off four individual keepers off of the docks. With four fish in the livewell, and time drawing near to check in, he decided he needed to make another change.

He went back to the swimbait, and with 20 minutes left in his fishing day, he caught a big one to fill out his limit. His five keepers weighed 12 pounds, 4 ounces and pushed his final total weight to 43 pounds, 13 ounces. He would hold on to finish fourth, with three anglers having monumental days that leapt up to overtake him and Omori.

Turning Points
He said that he felt like he had an edge over the majority of his competition because he has learned what it takes to go out and fish for a win. “I was singularly focused on what it was going to take to win,” he said. “While it didn’t come together, I really fished the way I thought the event would be won, and I take pride in that.”

He said that because he had only been on the lake a few times, he ended up not having enough knowledge to make adjustments for the conditions that eventual winner Casey Ashley was able to make. “I didn’t have the database to be able to make the right changes once the conditions began to change,” he said. “That’s not to take anything away from Casey; he just flat beat us, and he deserved it. I remember thinking at the second day press conference him saying he knew what to expect with the coming conditions, and I was still trying to figure out how to get five quality bites. It just didn’t all come together for me this time, but I’m happy with my finish.” 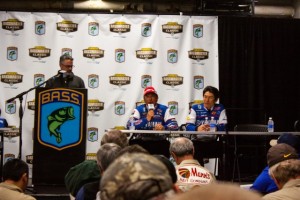 Final Thoughts
Rojas said that he started to feel like the event was slipping away from him on the final day because, although anglers tend to fish in a vacuum, they can read the comings and goings of their spectator crowd. “As they started to leave, I began to have the feeling that it was slipping away,” he said. “But, in spite of that, I really feel like I won last week. Not the tournament of course, but I led a day of our biggest tournament and got all of the exposure that comes with it. Also, our sport did a really good job at this event. B.A.S.S. stepped it up a bit, and the cities really welcomed us, it was a great week for all of us.”