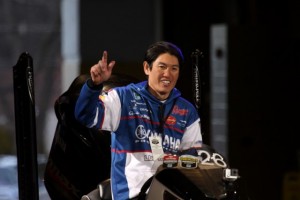 Takahiro Omori, the Bassmaster Elite Series pro from Emory, Tex., knows what it feels like to win the Bassmaster Classic. Having done so in 2004, Omori knows the effect that the biggest fishing event in the world can have on a career. But, just because the event is the Bassmaster Classic, doesn’t mean that the 44-year-old native of Japan takes it any more seriously than any other event.

The truth is that Omori dedicates himself to being competitive at every event, and he prepares as thoroughly as he can, and he tries just as hard to fish each tournament to win as he would the Bassmaster Classic. The difference is that he can visit the Classic venue for a little longer because it is in the offseason.

Pre-Practice
While he kept up with the conditions on the Internet all winter leading up to the event, Omori said that his primary concern was keeping up with the water levels and long range forecasts. “I knew that the lake level can go up and down a lot there, so I watched that,” he said. “I also wanted to be able to see the weather trends in the area because that could help me make my decisions on how to fish. 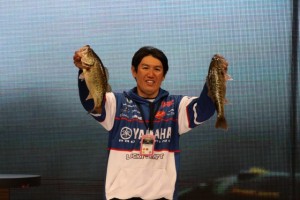 As with the rest of the anglers in the field, he went to the lake before the off limits period. “I spent several days on Lake Hartwell scouting in December,” said Omori. “I focused on fishing shallow, but knew that there was a strong likelihood that I would have to fish deep, so I looked for some of that type of water too.”

He said that he made approximately 300 waypoints in five or six areas of the lake during his trip, with only around 10-percent of them being deep water spots. “I was hoping that I could fish shallow because that is my strength,” he said. “But, I knew that I would have to prepare myself for some deep water; especially because of how Alton (Jones) won in 2008 and there was always potential for cold weather.”

His thinking would prove to be right on target.

Official Practice
Having kept up with the conditions on the Internet, Omori arrived for the event expecting to make a final decision of how to approach the event. “I wanted to find shallow water docks or rip rap with some darker water, but they were not any good,” he said. “Then, I went and started checking my deeper spots, and I only got bites on half of them.”

Having been able to eliminate so many things, he decided that he needed to focus on deep water for the event because of the cold conditions, and he was not able to find any real consistency in the shallower water pockets. “I ended up with three areas of the lake and only about five or six way points that I felt like I could do well on,” he said. “I would have rather been able to focus on shallow water, but you have to fish the conditions.” 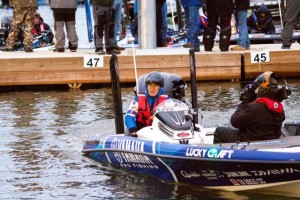 He set his mind to going after the deep bite.

Day One
With the delay on the start time due to safety concerns of local officials, Omori said that it didn’t bother him because he knew that everyone had the same conditions. “It is what it is,” he said. “We were all in the same boat as far as the time, so there was nothing I needed to get concerned about.”

While he logically knew that everyone was going to be battling the same time constraints, he also knew that he was not going to be looking for that early morning shallow water blue back herring bite; so, he was a little more relaxed. “I had two techniques, and they were both deep water techniques,” he said. “I was going to be throwing a drop shot and a football jig in deep water, so I wasn’t in a hurry.”

He arrived at his starting location and immediately began catching fish on his drop shot rig. He selected a green pumpkin, 4-inch Gary Yamamoto Shad Shaped worm on a 1/0 size Gamakatsu Drop Shot / Split Shot hook and a 3/8-ounce Ultra Tungsten sinker, He rigged it on a 6’8” Daiwa Spinning rod and 3000 size Daiwa reel with 7-pound-test Sunline FC Sniper Fluorocarbon line. The rig produced immediately; he had his limit in the boat at 9:00, a half an hour after fishing began. 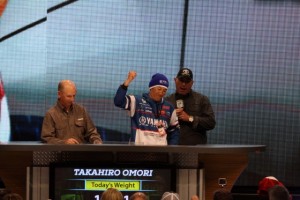 He would spend the rest of the day looking to upgrade. To do so, he added a green pumpkin 3/4-ounce football jig he bought at Bass Pro Shops, paired with a matching 5-inch Yamamoto Double Tailed Grub. He threw that on a 7’3” Daiwa baitcasting rod and 8.0:1 Tatula reel spooled with 16-pound-test Sunline Shooter Fluorocarbon. He caught four more keepers, and culled his last fish on the jig at 1:30 in the afternoon.

He returned to the weigh-in with 15 pounds even and landed in seventh place.

Day Two
He returned to his starting spot from the first day, began fishing the drop shot, but it took him an hour and a half to get a bite. “I couldn’t seem to get a bite early before the sky got bright,” he said. “I fished for a long time before I started getting bites, and it took me until 9:00 until I got my limit again.”

He stayed in the same area and pulled out the jig again. He managed to catch five more keepers alternating between the jig and the drop shot rig. It took a little longer in the day to get his final limit, but at 2:00, he was able to catch four and half pounder on the jig to get to his final limit. 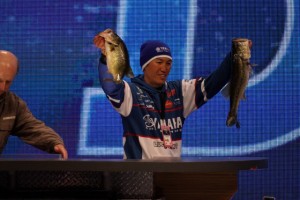 He returned back to check-in knowing that he had given himself a chance to be in contention. When he weighed 16 pounds, 11 ounces, he took the day two lead by two ounces over Yamaha teammate Dean Rojas.

Day Three
While he was in the lead, he said he wasn’t comfortable because of how tight the standings were. “I knew that anything could happen from being at Hartwell for the 2008 Classic,” he said. “I knew that the guys who had caught them really big on the first day probably wouldn’t catch 20 pounds again, but I knew others could.”

He decided to continue pursuing his deep bite to remain consistent, and he had not been able to develop a shallow bite, and he knew that it was possible for the rest of the field to have tough days. He went to his opening area again, and found the bite tough on day three. “It became obvious that my areas did not have an early bite,” he said. “Once it got brighter, or when the sun was out, I could start getting bites.” It took him an hour longer to get his limit that the previous day.

At 10:00, with a limit in the boat on his drop shot, he began alternating with the jig. After catching one more keeper by noon, he decided it was time to take a chance on a big fish or two. He pulled up stakes and ran upriver into the dirty water to see if he could get a bigger bite on the jig and Lucky Craft crankbaits. But after two hours and no bites, it was time to leave for check-in.

He returned to the Bon Secours Arena with his 12-pound, 8-ounce limit and slipped to third place overall behind tremendous days by Bobby Lane and Casey Ashley. His total weight was 44 pounds, 3 ounces. 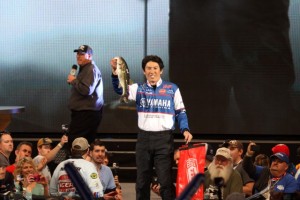 Competitive Edge
Omori said that having the capability of his GPS and the sonar on his Lowrance fishing systems is what made the real difference for him. “I was able to find everything that I needed to and see the fish in the area before I even made a cast,” he said. “Without those, I would not have been as productive.”

Final Thoughts
He said he fished a great tournament. “If I was ranking this tournament on a scale of one to ten, I would have to score this one a nine,” he said. “I fished a really clean tournament and really did the best that I could with my areas.”

That thought compares to a score of five that he gave himself in the 2004 Bassmaster Classic; which he won. “I broke off two five pounders on the second day of that tournament, and really didn’t fish clean,” he said. “This year, everything went well, and I fished well; I just didn’t have enough to beat Casey and Bobby; it just wasn’t my time to win again.”