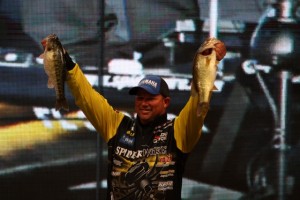 Lakeland, Fla.pro Bobby Lane was experiencing a homecoming of sorts. In 2008; the last time the Bassmaster Classic was at Lake Hartwell, Lane was fishing in the biggest event in the sport for the first time. He came darn close to winning it there too, finishing fourth.

When the 2015 Classic was announced, Lane felt a strong sense of his ability to win the event. He felt like he understood the lake, and felt like he would have a chance to recreate – and improve on – his results from the 2008 version.

He did improve – in all but one category.

Pre-Practice
He said he checked the Internet prior to going, but only to keep up to date on area weather conditions for the lake, and he spent some time looking over those conditions. He said that he likes to allow himself to avoid any preconceived notion caused by the information of others. “As a rule, I don’t do a lot of Internet research for tournaments,” said Lane. “I don’t care what weight won last week, and what lure everyone talks about being the hot thing, because that stuff can mess up your thought process.” 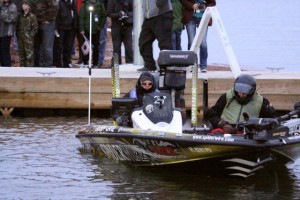 Lane said that he spent only two days on Lake Hartwell prior to the lake being deemed off limits. He said that all he wanted to be able to do was check some of the areas he fished in the 2008 Classic, and get an overall lay of the land for the current conditions. “I rode around, checked the lake level and some of my areas from the last Classic,” he said. “I wanted to have an understanding of what things were now, so that as I got closer to the tournament, I could have a better understanding of what might be happening as the conditions changed.”

He planned on having as much deep water stuff as he could, but knew he had to check on shallow water patterns as the event drew nearer.

Official Practice
He returned for the official practice period in the week prior to the Classic with an open mind. He got on the lake and immediately started looking for the shallow water bite. “The water temperature was in the 47 to 49-degree range; which was similar to last time,” he said. “I planned on using a crankbait and letting the fish tell me what stage they were in.”

He covered a lot of water, got only a few bites, but managed to put together 18 to 19 pounds on his first practice day. “I got seven or eight bites, and caught nothing over four and half pounds,” he said. “Those are the kind of fish you want to live with at a lake like Hartwell.”

After finding a shallow bite, he spent the second day of the practice period deep. He idled a lot looking for deep schools, and though he saw some on his Humminbird Onyx 10, he only managed to produce one two and a half pound spotted bass. He did find a roadbed on his Lakemaster Chip that he checked, found loaded with bait and arches signifying fish, and left it alone, not wanting to sore lip anything before the event.” 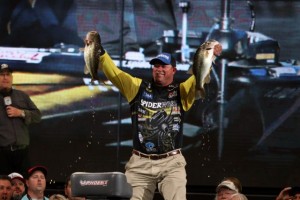 He spent the third day of practice trying to duplicate the first day, but did not get any bites. He checked some deep water stuff, and caught one four and a half pound spotted bass. Then he turned his attention to skipping docks with a finesse jig, and got four bites in four docks. He felt pretty good about what he had found with one more practice day left, and the temperature still holding at 49 degrees.

On the final practice day, he decided to check some more docks, but found that the water temperature had fallen to 38 degrees. He checked the road bed with a crankbait and a fish head spin, and got one bite. He did not want to write it off because it looked so good, and he saw the foul weather coming.

He prepared 15 rods for the event the day before, but planned on using mainly four. A generic pearl white 1/2-ounce fish head spin with a soft jerkbait trailer that he would throw on a 7’ medium heavy Abu Garcia Veritas and Revo Orra Winch reel spooled with 15-pound-test Spiderwire monofilament. He would rely on a Prizm Red Craw Yozuri 3DB Mid Crank set up on 7’ medium action Abu Garcia Veracity rod, a 7.1:1 Revo Premier reel and 10-pound-test Spiderwire Ultracast Fluorocarbon. His third setup would be a dropshot rig with a 4-inch watermelon / red sparkle Berkley Handpour Finesse Worm, he would throw with a 6’9” medium-light spinning rod and size 30 Revo Premier reel spooled with 6-pound-test Spiderwire Ultracast Fluorocarbon. He rigged the dropshot with a 3/8-ounce dropshot weight and a size 1 Skinny Bear Extra Wide Drop Shot hook. His final setup included the 1/2-ounce green pumpkin finesse jig paired with a shortened version of his Havoc Craw Fatty, he threw this on a 7’medium-heavy Abu Garcia Veracity rod and 7.9:1 Revo MGX reel spooled with 15-pound-test Spiderwire Ultracast Fluorocarbon. 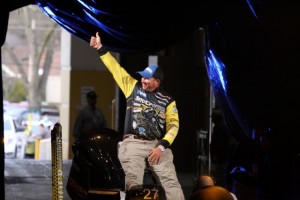 “I felt pretty good about everything,” he said. “I felt like I had a good mix of things to go on, I would just have to make the right decisions and adjustments along the way.”

Day One
Like several other competitors, Lane was not exactly happy with the safety delay in the morning on the first day. He felt that it was going to cause a problem for him, especially with the early morning herring chasing fish.

He went to his first area and pulled out the fish head spin and a football jig, but failed to produce a fish. He felt like there were fish in the area, but they were probably not active. He moved to a second spot and picked up the dropshot rig, and caught two fish pretty quickly.

He ran to his roadbed, and despite the 40-degree water temperature, tried the fish head spin and Yo-Zuri Mid Crank to no avail. “I let myself drift after that and saw some fish on my graph when I got off the edge,” he said. “I picked up the jig and caught a three and a half pounder and another pound and a halfer before the bite shut off.”

He stayed for a little while before returning to the spot where he had caught the dropshot fish earlie. He made a drop, got a bite, set the hook and the fight was on. “I fought that thing for a good minute,” he said. “Then, it just pulled off. I had a sinking feeling that it was going to cost me, and it was the last bite I had all day.” 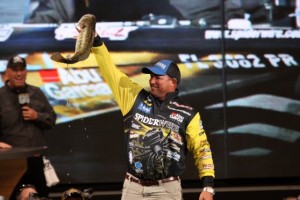 Day Two
He decided to start on the same spot he did on the first day. He started with the jig and fish head spin again, and had a couple of bumps, but no takers. After two hours without a fish, he ran into a creek and began throwing the crankbait. He managed to put a small keeper and a three and a half pounder in the boat.

After that, he returned to the road bed and despite seeing loons on the surface and baitfish on his graph, he didn’t get a bite. He allowed the boat to drift back, and in doing so, he saw arches again off the edge of the road. He tossed out the fish head spin and caught a three pounder. Then, on the next cast, he caught a four pounder to give him four fish. He ran to the back of the creek again and caught a two and a half pounder on the crankbait to fill his limit.

He decided to try skipping his jig at some deeper docks, so he went around the corner to the closest set he had, and quickly caught a three and a half pounder to cull the small keeper he had. That gave him 10 to 15 minutes left to fish, and he crossed the creek to a second dock, threw out the Mid Crank and hooked a four and a half pounder to finish his day.

He came to the scales feeling better about his day, only to find out that the leaders had stumbled, and when he weighed-in with 17 pounds, 4 ounces and moved to ninth overall with 27 pounds, 4 ounces, he felt a lot better. 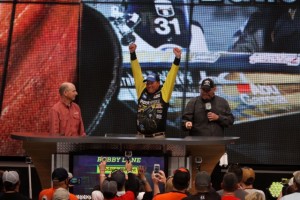 Day Three
He said he was ready to fish the next day. “I started the day with the feeling that I was gonna win the tournament,” he said. “I just had to go out there and make it happen.”

He went to his deep spot and never got touched. He went to his roadbed and didn’t get touched there either – until he backed off again. He tossed the fish head spin and got a three and a half and four pounder. He left the road bed planning on coming back every hour.

After two more stops, he had yet to boat another fish, so he ran back to the road bed and immediately caught another three pounder on the fish head spin. He left to go skip docks again, and give the road bed a rest.

On the second dock he made a presentation to, he got a bite and set the hook into a big fish. “I fought that thing for what felt like an eternity before landing it,” he said. “It ended up being six and a half pounds; my biggest of the tournament.” That left him an hour and a half left to fish with four fish for 16 pounds in the livelwell. 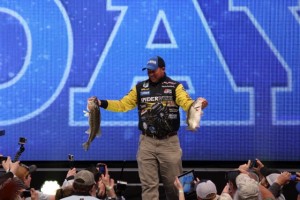 He fished some docks into the back of a creek and came across a culvert where he threw the crankbait and filled his limit with a two and a half pounder, then caught a three and a half to cull it with. He returned to the dock he caught the big one off, put his Power Poles down and made a cast with the jig. He got a bite, set the hook and fought a four and half pounder for a while before the line went slack as the fish shook the lure.

He made another cast, and began reeling it in, a wolf pack of big ones followed it in. “There were twenty fish up to five pounds in that school,” he said. “I tried to get them to bite, but I ran out of time and had to head back to weigh-in.”

He weighed 19 pounds, 1-ounce to take the lead with 46 pounds, 15 ounces, only to be beaten by Casey Ashley’s monster day. He ended up finishing second. 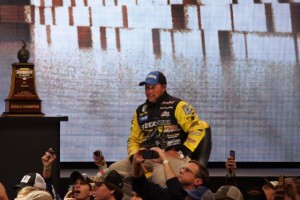 Competitive Edges
Lane said that his competitive edge comes from his toughness. “I was able to focus on the fact that it was the Bassmaster Classic, and was able to not let the weather affect me,” he said. “That and having such accurate Lakemaster mapping on my Humminbird Onyx fishfinders really helped me see where I needed to cast next.

“Casey fished very well, withstood the pressures, and I congratulate him for his great win.  I felt really good about my chances right up until he weighed in,” he said. “If I would have just been able to put a couple more fish in the boat on the first day, it could have been a different story. That’s how this sport goes, I got beat by a guy who fished better than me, but I’ll get my chance again.”