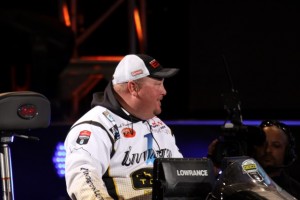 It may have been his first trip to the Bassmaster Classic, but Port Haywood, Va. Pro Jacob Powroznik is no rookie in big tournament competition. After several years competing on the FLW Tour, Powroznik had made several runs at Angler of the Year titles, and won a pair of events.

He turned his attention to the Bassmaster Elite Series in 2014, and promptly won two events in his first season. He brought worlds of experience into the 2015 Bassmaster Classic on Lake Hartwell, both from a career perspective, and from a lake perspective. He had a long history on the lake, and being relatively close to it, had put in his time trying to dial in a pattern that would help him in the biggest event of the year.

Pre-Practice
He spent many days on Hartwell prior to the lake going off limits. “I spent 25 days this fall and winter scouting Hartwell,” said Powroznik. “I wanted to find just about every brush pile I could on the lake so that I could avoid have to do too much searching during our official practice period before the event.”

He reported idling just about every inch of the lake, making waypoints on everything that could potentially hold a bass. He came to the event knowing where a great deal of those bass holding structure spots were, he also knew that he would have to develop two distinct patterns to have a chance to win the event. 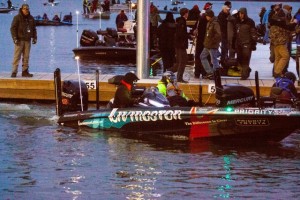 “I knew the fish head spin bite was going to be a factor in the mornings,” he said. “I also knew that I would have to have something else to have a chance. I planned on working on a shallow bite and looking for some other offshore stuff.”

Official Practice
Once the official practice period began, Powroznik looked for areas that would give him the best chance to win. He started early on the first morning with the fish head spin trying to develop that pattern, it didn’t take long. “I caught a four-pound spotted bass on the first spot, and got several other indications of fish in the area,” he said. “I knew that my thoughts on the fish head spin were accurate, so I used the afternoons to look for other patterns.”

He spent ample time throwing a Chrome Shad Livingston Lures Jerk Master 121 and a Guntersville Craw colored Howeller, but said he didn’t find the steady quality that he thought would win the event. So, he started searching the deep water programs that he felt would give him the secondary pattern he wanted.

After four days of practice, he settled on the mid lake area and around the mouth of the Seneca River. “I wanted to maximize my fishing time,” he said. “All of the areas I planned to fish were within eight miles of the takeoff, so I could spend as much time fishing as I could.”

He felt by targeting the timber lines in main lake pockets with the fish head spin, and fishing a jig and a jighead worm, he could put somewhere between 15 to 20 pounds a day in his livewell. 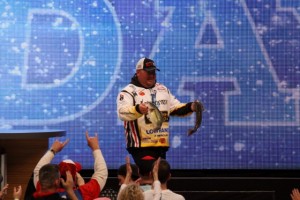 Day One
Powroznik; like every other competitor, went to the lake on the first morning knowing that the start of the event was going to be delayed due to the extreme conditions. Like a few others, he said he waited for launch knowing that he was missing his best window. “I sat there in my Toyota Tundra knowing that I was missing my best bite,” he said. “I tried to put it out of my mind, but by the time the (nearly) two-hour delay was over, I had to go to my backup plan to try and put something together.”

He went straight to his deep water program, choosing to fish a V&M Football jig head tipped with a 5-inch green pumpkin V&M Mag Finesse Worm on a 7’6” heavy action Quantum EXO rod and 7.3:1 EXO reel with 10-pound-test Hi-Seas Fluorocarbon around his deeper brush piles.  The approach netted him four bass for 9 pounds, 2 ounces and saw him finish the day in 25th place.

Day Two
Knowing he was going to be able to target his early morning bite, Powroznik pulled out the fish head spin custom made for him by his friend Ryan Coleman at Spot Sticker Lures. The 7/16-ounce pearl white head was tipped with a white V&M Pork Shad soft jerkbait. He threw the lure with a 6’10” medium-heavy Quantum Tour KVD rod and 6.3:1 Smoke reel filled with 12-pound-test Hi-Seas Fluorocarbon line.

He reported catching 20 to 25 keepers in the first hour and a half in the morning; all of them in the three pound class. When his flurry ended, he had 15 pounds in his livewell. “I spent the rest of the day looking for a big bite,” he said. “I did hook one great big one on the fish head fairly early, but it pulled off before I could get any real control of it, and that was my only real shot at a big upgrade.” 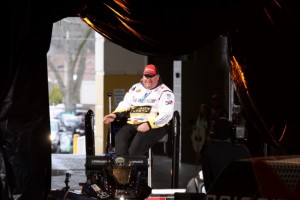 He ended the day with that 15 pounds in the boat. His two-day total leapt to 24 pounds, 2 ounces, and he moved up to 19th place in the standings heading into the final day.

Day Three
He opened the day at the same spot that he had his massive flurry on the second morning, and immediately went to work with the fish head spin. “I hooked into a giant striper on my first cast that I finally broke off after fighting it for more than 10 minutes,” he said. “After retying the fish head spin, I caught a five pounder on my second cast, and for the next 10 or 15 casts, I caught them really good.”

He left that area with one kicker and a solid limit in the livewell, then pulled up to his second stop and culled three times with big largemouth. With his biggest bag of the tournament in the boat, he went looking for a fish that could really make a difference. “I spent the rest of the day looking for a six or seven pounder that would have really bumped the weight up,” he said. “But, I never got the kind of bite that I wanted. I headed back to check in with the limit I had after my second spot.”

That limit would weigh 18 pounds, 15 ounces and push his final weight to 43 pounds, 1-ounce for the tournament; good enough for fifth place overall. 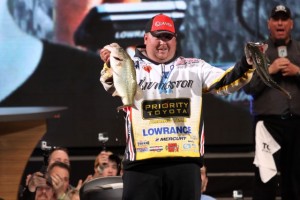 Final Thoughts
Powroznik felt strongly that the delay on the first morning really kept him from winning the event. “I’m not wanting to take anything away from Casey, but that delay was the real turning point of the event for me,” he said. “I was able to get at least 15 pounds every time I went out, and to not have that first two hours really changed the way I had to fish; I think I would have really had a shot to win.”

He said that Lowrance provided him what proved to be the real edge he needed with a new Insight Genesis chip of Lake Hartwell. “Once we found something on our mapping, the Insight Genesis was so detailed that we could find every other spot on the lake like it,” he said. “It really made a huge difference in me being able to locate areas that would be holding the kind of bass I needed without wasting a ton of time.”