James Niggemeyer – After the Classic at Hartwell

I returned home from the Bassmaster Classic in Greenville, South Carolina the night before last and it snowed the following morning.  Not a normal occurrence in east Texas.  It’s pretty and the kids love it.

It was great to once again compete in the Bassmaster Classic, even if it does go down as the coldest on record.  Boats were frozen to the trailers and on day one the remote drain plug of my Ranger was frozen in the “out” position.  Ice was forming in the guides of my St. Croix rods, the line guide of my Ardent reels and even on my Gamma line.  At the start of practice the water temperatures were around 50 to low 40’s, but fell to the mid 40’s to high 30’s.  Ice was on most banks and in the backs of some creeks and pockets there was ice all the way across.   For a California native now calling Texas home I get cold easily.  The Cabela’s Guidewear was an integral part of my comfort during the bitter 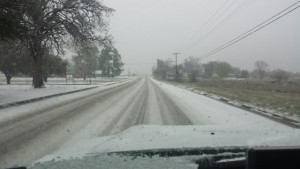 cold and helping to keep my mind on the task at hand and not shivering through the event.  In the midst of the extreme conditions my equipment performed flawlessly.

I am not complaining, but I am really just trying to give an accurate description of the conditions.

The third week of February can be early pre-spawn, but with the weather it was more of a winter seasonal pattern.  I enjoy winter time fishing and the patterns that occur during that cold water period.  I have to reset my expectations during that period to just a handful of bites, normally.   I was disappointed with my results during practice, but it was the only thing I had going so I did the best I could with what I found.  What I found was a crankbait and jig pattern in eight feet of water or less.

On day one I had six bites and boated four and started the tournament in 27th, just outside the cut line of 25th after weighing four fish for 8 pounds, 10 ounces. On day two I had seven bites and boated all of them, but 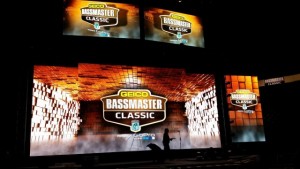 almost doubled my weight with 14 pounds, and moved inside the cut line at 23rd.

Naturally, day two was an important day for me and it helped that I caught a key fish on my last pitch on my Strike King jig.  I fished some of the same areas with the same techniques, but also added some new water and that made a big difference.

The final day I again added some new water to the mix and added another lure to the mix; a jerkbait.   What led me to the jerkbait was my Raymarine graphs, because I could see the presence of suspended bait.  I believed they were Blueback Herring high in the water column over 14 to 24 feet of water.  I ended the day with 11 pounds. 12 ounces, 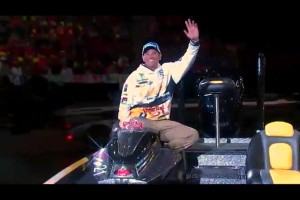 unfortunately I lost a four pounder late in the day that would’ve put me around 14 pounds again.  That weight moved me up from 23rd to 21st overall.

As a competitor I want to win.  I want to win the Bassmaster Classic!  Even though that didn’t happen for me this time, I was able to maximize the fish and patterns I had found on Lake Hartwell enough to compete on Championship Sunday.  I wanted the “whole enchilada”, but even if that wasn’t going to happen I wanted the biggest piece I could have and at 21st I think I got a decent piece.

Thanks for reading, you can keep up with me by following me on Facebook at “James Niggemeyer, Angler“, Twitter and Instagram. Thank you for reading my blog.