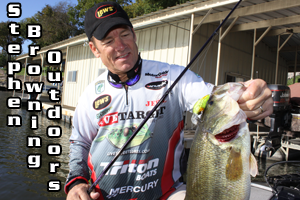 Stephen Browning here; ‘til next week when the green flag drops for the first Elite tournament of the year, I am going to be looking for some redemption.

It was only a few years ago that I had fished an event down there, but it was a Red Fish Event – myself and fellow Elite Series Angler Greg Hackey fishing the Red Fish Cup at Lake Charles down there a few years back and we were within about a hundred yards probably  of winning that event.

But I know that both of us will be looking for some redemption as we travel back and look for a different species; you know, the large mouths;  largemouth bass; but still, we probably both feel like that part of the world still owes us a victory.

We had made a big long run and actually fished  just south of Orange chasing red fish during that event.

First day of that tournament; it was a three day tournament , we actually could see the right bunch of red fish that we needed to catch, but lo and behold, the water got too shallow and we couldn’t get to ‘em; so we only ended up with one fish that particular day.  On day two, the tide came up early and we were able to get to the red fish and weighed in like the second biggest stringer of the day.

But that missed opportunity on the first day probably cost us from being in the championship round and the top five round and probably cost us the chance to win a pretty prestigious event down in that area; so I am looking forward to get back into that area.

I have been doing a lot of boat shows and a lot of trade shows; a lot of open houses and I am just kind of tired of only talking about fishing – ready to get the game started.

Those few that know; that have kept up with me over the past few years; you know that that first event of the year is one of my strongest ones.  I have a lot of motivation going into the Sebine River at Orange ; having to sit around the Classic shows and work for sponsors – it was a little incentive to work my butt off this year and get out there and try to make the Classic again – you can’t win it if you are not there.

So, I am looking forward to having the green flag dropping this year and maybe gaining some redemption down around that Orange, Texas area.