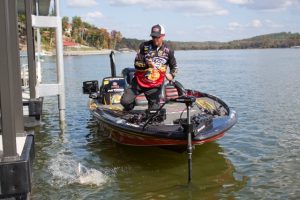 There’s little doubt in any fan of professional bass fishing’s mind that Kevin VanDam is the best professional touring angler to ever pick up a rod.  In a field of extraordinary anglers, VanDam has long been atop that list of anglers.

One does not get to that level of excellence without being able to pick apart a lake and put together a pattern.

In today’s episode of AdvancedAngler On the Water, VanDam displays his process for figuring out where bass a holding on Kentucky Lake.  Filmed in early fall, VanDam describes his thought process and demonstrates how he goes about quickly moving through areas until he intersects with the bass.

Again, in our first attempt at these guest episodes, we were attempting to fil them entirely on action cameras, and there is a little bit more wind noise in places than we’d like, but we’ve cleaned it up as much as possible so you can get the drift.