Las Vegas, Nev. – September 12, 2014 – On a day that saw the hot, slick conditions of practice on Lake Mead turned upside down with strong winds and cooler temperatures, the field of 186 pros and their AAA partners at the 2016 WON Bass U.S. Open found themselves having to make adjustments. 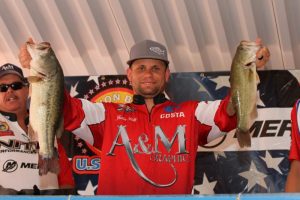 While many expected the offshore bite that was predominant in the week prior to the event, the strong morning – and even stronger afternoon gusts – made for a day of decisions and alternative plans. On a day that saw 18 boats not weigh-in and over half the total field not catch a limit, Phoenix, Ariz. pro Justin Patti scrambled, and made the most of the day by catching 11.43 pounds to put him in the lead on day one of the West’s premier bass fishing event.
It was the day’s big bass leader, a 4.75-pound largemouth he caught at 7:00 this morning that anchored his bag. “That kid of a bite really calms you down and makes you feel like it’s going to be a good day,” said Patti. “I burned a lot of gas and ran all over the lake today. We caught a fish here or there and I basically abandoned a lot of what I had in practice today and ran new water, and it just kind of worked out; hopefully I can duplicate it tomorrow.”
Following the same program was former U.S. Open Champion Justin Kerr, the Lake Havasu City, Ariz. pro showed his versatility and moved off of the deep water bite he had found and capitalized on his versatility to finish the day in second place. “I decided to play the winds and throw topwaters early and then ran a bunch of shallow stuff to fill our limit,” he said of his 10.36-pound limit. “I actually was hoping for a little more, and had a couple of chances, but I put myself in a good position and feel like I can make a run at winning this event again.”
The third place pro, Jimmy Reese from Cotati, Calif. said that he abandoned his practice early and found a mixed group of smallmouth and largemouth bass chasing Gizzard Shad; his approach produced 10.12 pounds. “I think I really found something that can hold out, and I’m pretty excited about it,” said the FLW Tour pro. “I’m going to go back there tomorrow and see if I can make it happen again.”
Keegan Graves of Meridian, Id. Placed fourth with 10.10 pounds and Mike Phua of Chino, Calif. rounded out the top five with a 9.66-pound limit.
On the AAA side, the top five rounded shared the weight of their pros as this is a shared weight / Pro / Am format. The leader was Jess Glass of Santee, Calif, followed by Troy Pasalich of Poway, Calif., with Bill Lansford of Needles, Calif in third place. Fourth place went to Randall Bruce of Las Vegas, Nev. and fifth went to Nathan Billetdeaux of San Tan Valley, Ariz.
Full Field Standings can be located below.
Day Two of the 2016 WON Bass Nitro / Mercury U.S. Open will commence tomorrow with the winds expected to increase, and the daily high temperatures expected to increase.
The Costa See What’s Out There Live Coverage will continue to bring all of the action from Las Vegas and Lake Mead throughout the three day event. You can go to WonBass.com to connect and watch the live streaming video on the following schedule – ALL TIMES PACIFIC.
Monday September 12 through Wednesday September 14
Event Coverage 9:00AM – 11:00AM
Live weigh-in 2:00PM – 5:00PM
Daily Post Game – 7:00PM to 8:00PM
Wednesday Sept 14 Awards Show 6:30PM – 9:00PM from the Railhead Room at Boulder Station Casino
The WON Bass Nitro Boats / Mercury Marine U.S. Open presented by Costa Sunglasses Webcasts can be accessed by visiting www.wonbass.com, or directly at the event page of the 2016 The WON Bass Nitro Boats / Mercury Marine U.S. Open See What’s Out There page presented by Costa Sunglasses
The WON Bass Nitro Boats / Mercury Marine U.S. Open Live Webcast is presented by Costa Sunglasses, the event is brought to you by Nitro Boats, Mercury Outboards, Costa Sunglasses, Bass Pro Shops, Bridgford Foods, Daiwa, Seaguar, Plano Molding, YoZuri, Pro Mar, Eagle Claw TroKar, Lowrance, St.Croix Rods, Frabill, Okuma, Big Hammer, Fishing for Adoption, Global Fish Mounts, A&M Graphics, Savage Gear, Storm, Calville Bay Marina, BG Insurance, Lead Enterprises, KUIU, Montebello Chevrolet, Phenix Rods, Rapid Fishing Solutions and Sure Life.
2016 U.S. Open Day One Pro Standings
2016 U.S. Open Day One AAA Standings