Light north breezes and air temperatures in the low 40s greeted Bassmaster Elite Series anglers in the moments leading-up to the first cast of the morning at West Point Lake on the Georgia-Alabama border.

When asked about the curious collection of dead gnats, eye glasses, a plastic spoon and a banana on the dash of his boat, a bundled-up Shaw Grigsby joked it was a reflection of the confused state of mind West Point has left him in after three days of practice. “I have no clue what I’m doing, or how I’m going to catch them today,” laughed Grigsby, who won the 2011 Bassmaster Elite Series season opener. 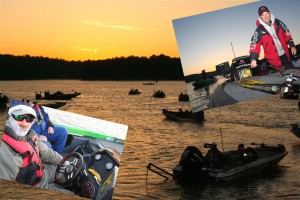 Just down the shoreline from Shaw, Kevin VanDam hung up his cell phone after wishing his wife and boys a great day and began to assemble a collection of Quantum Smoke and Tour KVD combos. “It’s gonna be tough out there today. In fact, probably real tough to catch any big ones, but I have caught a couple in practice,” he said with a confident and conspiring wink.

As for grey bearded veteran angler Tommy Biffle … well … he was bundled-up and thinking of home too — as in his home waters of Fort Gibson Reservoir. “Fort Gibson is flooded out right now, but I figure by the time I get home two weeks from now, it ought to be just right. The water should be falling back to normal levels, but still flooding the shoreline bushes,” said Biffle, who’s won more than two million dollars primarily by jerking bass out of flooded bushes.