This week marks the beginning of the second half of the 2011 Bassmaster Elite Series schedule.  The start of the Pride of Georgia tournament at West Point Lake means that anglers only have four tournaments to hold onto their position in the Toyota Tundra Bassmaster Angler of the Year standings or make the climb back into qualifying range for the 2012 Bassmaster Classic.

The 2011 season has seen a significant amount of change in the standings.  Anglers who have earned a reputation for steadiness have slipped, some who have been middle of the field performers have risen to prominence and some who have been good in the past have been building career years. 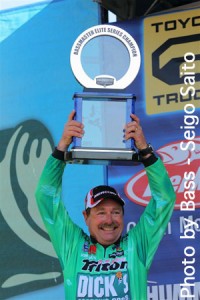 Part of the reason for the difference is the nature of sport in general; things change.  Fishing is a sport of decision making, and the difference between in the money and out can be a split second decision that changes the outcome of a day; and therefore a tournament.

In the springtime, a boat draw can be a huge difference as well.  With sightfishing being a dominating technique, getting a late boat draw can put your whole day on the scrap heap.  Anglers who locate several quality bass on beds can arrive to find every one of them being fished by another angler, or worse yet; already caught.

Another reason for the shakeup is the opening two weeks in Florida.  No other type of fishery in the country separates a field like the state of Florida.  Being the site of Dean Rojas’ record 45-pound, 2-ounce record heaviest one day catch, people believe Florida is a big fish state.  While it most certainly is a big fish state, Florida is also a fickle state for tournament anglers.  Anglers can have two giant days, a mediocre day and a small limit and still win.  However, miss the big bite, and an angler is in the bottom third of a field faster than he could ever consider.

Qualifiers
Since the inception of the Elite Series in 2006, the top 36 anglers in the Toyota Tundra Bassmaster Angler of the Year Standings received berths into the Bassmaster Classic in February the following year.  Along with those 36 Anglers, the defending Classic Champion received an automatic berth into the following year’s event. 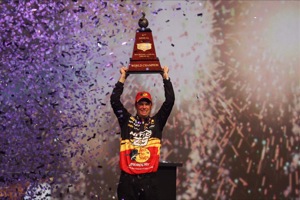 The game changed for 2011.  The winners of the eight regular season Bassmaster Elite Series events received and automatic berth into the Classic, as did the defending Bassmaster Classic Champion.  What this meant to the remainder of the field was that; without a win, they would have to finish in the top 28 in the Toyota Tundra Bassmaster Angler of the Year standings to be assured a berth.

Elite Pros Already Qualified
By nature of the “win and you’re in” rule, four anglers have already earned their berths into the 2012 Bassmaster Classic.  Shaw Grigsby earned his spot at the season opening Sunshine Showdown on the Harris Chain.  Edwin Evers also earned his slot by winning the Citrus Slam on the St. John’s River.  Davy Hite’s win at the Alabama Charge earned him his chance at a second Bassmaster Classic trophy while Dean Rojas’ ticket to the Classic was punched when he won the Battle on the Bayou at Toledo Bend Reservoir. 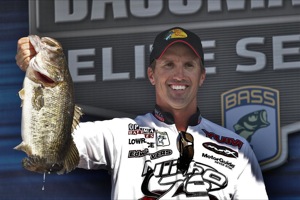 Where Do We Stand to Date?
As of the completion of the Battle on the Bayou, all four of the individual tournament winners and the defending Classic Champion find themselves positioned in the top 28.  That means that the current qualifying list would reach down to 33rd place.

What that means is that if the season were to end today, Brent Chapman with 784 points would be the last man into the 2012 Bassmaster Classic in Shreveport / Bossier City, La.

Simple Projections
Assuming that the five double qualified anglers stayed in the top 28, then one simple way to make a projection is to divide the points of the last man in qualifying positon by the number of tournaments held, then multiply that number by eight; the number of tournaments for the whole season.  In this case the average for Chapman would be 196 points per tournament fished; which would make his eight season total 1568 points; an average finish of 39th place over the eight event season.
To be statistically guaranteed a berth in the 2012 Bassmaster Classic, and angler would need to finish in the top 28 in the Toyota Tundra Bassmaster Angler of the Year.  Staying with our simple figuring of the season totals thus far, Kevin Wirth currently ranks 28th with a total of 811 points, 202.75 points per event; an average finish of 36th place.

So, if an angler wants to guarantee themselves a berth with a top 28 position in the standings, then they would need to earn 1622 points for the year.  Of course the point totals can creep up, or slide back, but an angler who wants to aim for a shot at the Classic can use this as a basis for aiming for the their average finish for the remaining four events of the 2011 season.

Historical Comeback Kids
According to Bassmaster Senior Editor Ken Duke; who keeps very detailed statistical records of all things B.A.S.S., there is some precedence for anglers making a late season charge into the Classic.  Duke’s records indicate that Jeff Kriet moved from 59th place in the standings with four tournaments left in the season to finish 14th in the standings.  Paul Elias qualified in 2010 by climbing from 58th to 37th in the standings, and earning a berth because of double qualifiers.

In 2009, Gerald Swindle earned a spot in the postseason when he finished 12th in the standing after the regular season.  Swindle’s season did not start out so well, and in fact; he found himself in 57th place following the third event of the year.

Another angler who made a big move that year was Tommy Biffle, who moved from 17th place to 7th position in the final event of the season; he too fished in the 2009 Postseason in Alabama.

Who Has a Shot?
With all of the above considerations in mind, who has a legitimate shot at getting into the 2012 Bassmaster Classic?  Here is a by the numbers look at what anglers need to finish to make it in: