It was a relatively mellow break after we finished the Kids Fishing Day.
We went to a family barbeque in celebration of my nephew graduating and Memorial Day. It was fun to see all of my family, it had been a while since me and my brothers got together in one place.

We had fun. We played basketball and I think I beat up my brother John pretty bad; he mustâ€™ve been black and blue for a few days after the get together. I may not be able to shoot the ball very well, but I can certainly put up one hell of a strong defense.

Along with the basketball, we had a chipping contest with the cousins and nephews and my nephew pretty much beat us all pretty good.

This last week we got the girls together for their Pioneer Day Parade in Meadow Vista. Every year one of my buddies goes out there in his rock crawler 4×4 and the kids all go along in their little electric jeeps. 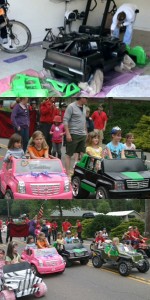 Lea had been using her pink Barbie Jeep for it, but told me this year that she was tired of the pink and she wanted it black and lime green. I took the ting apart, painted it and put it back together for her to parade in her bright jeep. She was the driver and Courtney was going to be the candy thrower in the back of the Jeep. Kim took them over there, and I canâ€™t wait to see the pictures.

Another thing that came up recently was my friend Don Barone, who writes for B.A.S.S., Wired2Fish and Bass Resource has been working really hard to try and help the victims of the storms that hit the South so hard over the past couple months.

Don started calling it â€œTackle the Storm,â€ and he was looking to friends and the industry to help by donating items to give back to people who lost everything in the storms. We donated some Skeet Reese Jr. Champion combos and by the time all was said and done, Don was forming it into a 501c3 non-profit corporation. He asked me to be on the board, and I was so proud to say yes.
Don is a great friend, with a big heart and I was so humbled to be asked to be a part of it.

I flew into Little Rock to pick up the Lucky Craft / Berkley Havoc Big Rig in preparation for the last two event s of the season and got a shock when I drove out. They donâ€™t have any RV parking there, so I parked it in regular parking, and when I checked out my bill was $1200; I was shocked and pissed to say the least.

After that, I drove over to Mike McKinnisâ€™ house; where Iâ€™ll be staying this week, and I couldnâ€™t get my rig up the steep gravel driveway, and had to back it all the way down. Luckily, the neighbors have a spot I can park it at with power, and I get to use a quad to shuttle myself between the houses.

Well, I spent today driving around the area looking for launch ramps in the five pools of the river that we can fish. I didnâ€™t want to waste time on practice days trying to find ramps, so I did it on Sunday. I probably drove for close to five hours by the time I was done.

Iâ€™m ready for these two events, I really want to give myself the opportunity to win one of them. Itâ€™s been a difficult year and Iâ€™d really like to end it on a good note.