Florida’s Shaw Grigsby is considered one of the greatest, if not the greatest, sight fisherman of all time when bass are on their spawning beds – and he’s more than living up to his reputation here at the Harris Chain of Lakes this week, 90 miles south of his Gainesville home. Today he hauled a show-stopping limit of five bass totaling 29 ½ pounds to the Bassmaster Elite Series scales.

Fact is, if kindness and upbeat attitudes could be weighed-in, Grigsby would win that tournament every time. You’d be hard-pressed to find a more positive guy among professional bass fishing’s best than Grigsby. That said, only Pat Golden and Grant Goldbeck, who are fishing very near to Shaw, might be only the only ones in the field to root against him – but don’t count on it – they’re known to be good guys too. 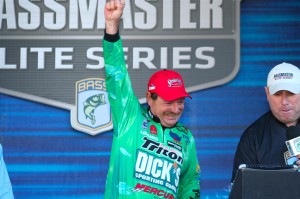 “Conditions are not the best (referring to the moon phase), but the sun was a real good thing,” said Grigsby. “We’ll have sun the next two days, but the question is will there be enough bass to last all three of us for two more days, because I’ll be surprised if the area is replenished with more bass coming into the area,” he added.

“I left a 5-pound male bass on a bed, so yea, there’s still quality fish there, but again you have to question how many bass are in there, and will there be enough for all three of us,” Grigsby contemplated.

When asked about his penchant for catching spawners better than just about anybody in the world, Shaw replied, “There’s was never a time in my career when I thought I was better at it than anybody else. Alton Jones and Dean Rojas are really, really good at it too, and my eyes are ancient compared to theirs. I just love to look for them and find them. It’s something I love to do.”

When asked if the bass were sensitive to line size, Grigsby explained that he caught fish on line ranging from 8 to 25-pound test. “I caught the 10-pounder with a Quantum Smoke baitcasting reel spooled with 25-pound line, she was barely hooked by the skin on her jaw, but I caught two or three of my keepers with light line spooled on a Quantum Tour Edition size 30 spinning reel,” said Grigsby, who has fished with Quantum since the brand’s inception in the mid 1980s. 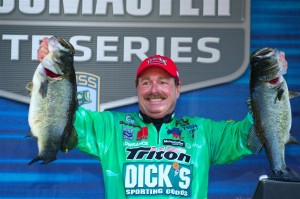 Can Shaw’s 8-pound lead over Quantum teammate Kevin VanDam hold up for two more days? In Florida, you never know. But one’s thing’s for sure, if it does, a nice guy will finish first.