Long-time pros Gary Klein, Shaw Grigsby and Gerald Swindle find themselves between moons and sweating it out in Friday’s 40-degree sunrise temps at the Bassmaster Elite Series tournament on Florida’s Harris Chain of Lakes.

Always classy Gary Klein finds himself in an unfamiliar position this morning. The likeable veteran is sitting way down in 75th place. Still, Klein’s early dawn perspectives were completely positive as he sat in his boat tying on lures for the day ahead. “Hey, I was happy to catch a limit yesterday, and I’m only one big bite away from jumping from the back of the pack to the front of the pack. I’ll slow up. I won’t run around. I’ll put my head down, and focus on catching what’s living there. And trust me, they live there, I know that much,” said Klein, who recently began a primary sponsorship with Repel Insect Repellents. 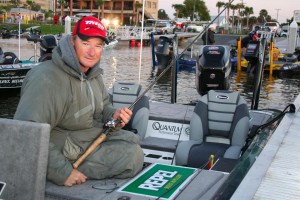 Klein’s long-time friend and fellow competitor Shaw Grigsby starts the day in 11th place but he’s certainly concerned. “I’m sweating it really bad. We’re pulling away from the new moon that we had last weekend. There were tons of huge bass on spawning beds here Monday and Tuesday — perhaps as many as I’ve ever seen in my life. It was taking 30-pounds to win local tournaments here. But that’s when the moon is right. But we’re between good moons, and this 40-degree weather is scary when it comes to Florida largemouth,” said Grigsby. 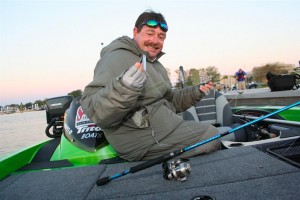 Grigsby said he will not adjust much today, instead doing more of what brought success yesterday. “I caught one bass yesterday on a Quantum Tour Edition PT 30 spinning reel, and the rest came on a Quantum Smoke baitcaster. There’s not much I’ll adjust. The biggest thing is staying mentally competitive, knowing that it could be really slow the first part of the day in this morning cold, then being mentally ready when the water heats up as the day drags on,” said Grigsby, who lives 90 miles north of this week’s tournament. 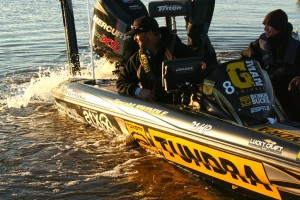 Speaking of adjustments, bass fishing’s funniest angler, Gerald Swindle, found no humor in his 86th place start. “I’ve gotta get my butt in gear, and I’m thinkin’ sooner rather than later, like right now,” said Swindle as he revved-up his Mercury outboard and backed-away from the shallow vegetation-laden shoreline.