February is a magical month. The Super Bowl signifies to culmination of the NFL season and the crowning of a Championship team. For baseball fans, the first migration of pitchers and catchers to Spring Training signifies the coming of the baseball season. For NASCAR Fans, the running of the Daytona 500 brings the start of the Sprint Cup season. 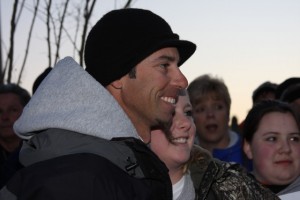 February also means the crowning of the Bassmaster Classic Champion. For bass anglers and fans, The Bassmaster Classic is our “big game” to enjoy. We gather around the computer and eventually television to see the details unfold as to the ups and downs of the winners and losers.

This is the time of the year that we find out who’s name becomes immortalized with the likes of Clunn, VanDam, Murray, Cochran, Fritts, Davis, Iaconelli, Jones, Reese and the rest of the Champions who have worn the title of Bassmaster Classic Champion.

This week, 49 anglers from 22 states will set out to claim that crown on the Red River in Shreveport / Bossier City, La. The last time these waters hosted a Bassmaster Classic was three years ago when Auburn, Calif. pro Skeet Reese hoisted 54 pounds, 13 ounces on the Classic scales and the Classic trophy overhead. That win made Reese only the 12th man to win the Bassmaster Classic and Toyota Tundra Bassmaster Angler of the Year crowns.

Reese won by strategizing to maximize his time in the upper pool, choosing not to lose time by locking through to the bottom pools. When he positioned himself outside of some of the backwaters being pounded by other competitors, the fish would come to him, and eventually the Championship.

Since 2009, The Bassmaster Classic has become the VanDam show, with the Kalamazoo, Mich. pro has won back to back titles in Birmingham and New Orleans; his third and fourth titles. 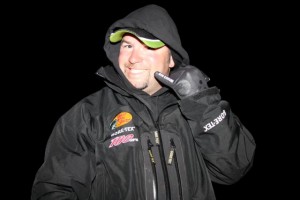 What can we expect this year? What have the conditions been and who has a chance to come out on top?

Conditions
Unlike the conditions of 2009; which were some of the lowest recorded temperatures in Classic History, the 2012 version of the Red River Classic appears to have some fairly mild conditions. With tournament days expected to have afternoon highs in the mid 60’s, and only one day that the overnight lows dip below 40 degrees; the Red River could be an improving fishery.

While East Texas and Western Louisiana have been struggling with drought conditions much of the summer and fall, recent storms have once again put fresh water into the system, and the Red River seems to be running steady.

As of today, the Red River appears to be gradually rising to the point where it will reach a maximum of 17.1 feet on Tuesday, but will begin falling slowly and will be at 16.4 feet by the start of the event on Friday. While we couldn’t locate the exact water levels from 2009, anglers were discussing low and clear water levels creating situations where anglers were fishing in cramped quarters.

That doesn’t appear to be the case in 2012. While I won’t be able to predict where the anglers will wind up fishing during the tournament, the water levels are near normal pool, and due to recent rains, appears to be muddy.

Techniques to Expect
Any time water gets high and muddy, bass tend to get tighter to hard cover such as stumps and laydowns; which are plentiful on the Red River. Backwater areas with slow current should still play a role in the tournament, especially with mild conditions allowing the water to warm. 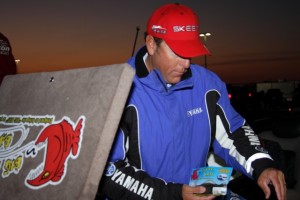 With dirty water, prespawn conditions and plentiful cover plentiful; fans should expect to see anglers covering water slowly with spinnerbaits, vibrating jigs, squarebill crankbaits and even Flippin’ with jigs and soft plastics. Because the clearer waters of 2009 won’t be a factor, the soft plastic jerkbaits and swimbaits that were effective three years ago, are a lot less likely to be factors this year.

What will become important is having bass be able to locate the lure in the dirty water. That means loud, flashy, and noisy lures in reaction baits and dark, bulky, noisy Flippin’ baits should be the norm. Expect to see a lot of bright chartreuse lures in spinnerbaits, crankbaits and vibrating jigs thrown this week. Spinnerbaits will likely feature florescent red kicker blades and either a Colorado or Indiana blade on the swivel. Lipless crankbaits and squarebills could be highly effective, but they will likely have to be loud, rattling versions to be effective. Vibrating jigs will likely be bright with gold or copper colored blades.

Flippin’ will also be a go-to for many anglers, so the use of dark jigs and trailers will be popular. Black or Black and Blue Flippin’ Jigs will likely see a lot of duty over the three day tournament, and black and blue, or black and red soft plastic creature baits will be enticing options for the anglers as well.

Who to Look For
It may seem a little cliché, but VanDam will be a favorite on most everyone’s list for a chance to three-peat in 2012. Don’t let the fact that he missed the top 25 cut in the 2009 Classic fool you. His first day performance that found him back in the pack with only four small bass was the result of a gamble that didn’t work out. 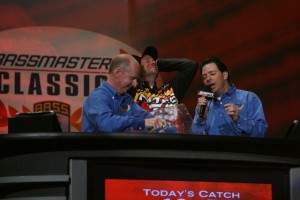 VanDam reported finding a group of fish on the final “official practice day,” that ate his swimbait; all of them were larger than five pounds. When it didn’t work out on day one, he returned to what was supposed to be his primary spot and caught 19 pounds, 7 ounces. Who knows what might have happened if he would have gone after consistency in that event.

Mike Iaconelli will have to be a favorite in my mind, partly due to his second place finish in 2009, but also because of the fact that Iaconelli is at his best on big stages. His penchant for putting things together when it matters most make him a threat, and I have no reason to believe this year will be any different.

Edwin Evers has a history of performing well on the Red River, and being from Oklahoma; he grew up fishing dirty water. Evers has come into his own over the past few years and it wouldn’t surprise me to see him there in the end with a chance to win.

Dean Rojas felt very confident in what he had found in the 2009 Classic, but just fell short of what he thought his area might produce. Rojas has proven that he will do what it takes to win in the big event.

Fred Roumbanis did well in 2009 with a swim jig until pressure got to his area. “Boom-Boom” has a flair for the dramatic, and with some experience on the Red River, he wouldn’t shock me either.

Ish Monroe has been fishing really well since the mid-point of last year; including a win at the final Northern Open on Oneida last year; he’s been having fun and fishing well; his kind of fishery.
Ott Defoe has proven himself to be one of the true, up and comers in professional bass fishing. he is a master in shallow water, and this might just fall into his wheelhouse.

Another angler with high potential is Greg Vinson. He has proven to be extremely versatile, and a real go-getter on the water; don’t be surprised if this Wetumpka, Ala. pro goes big this week.

Flippers. With so much of the Red River being full of cover, and with dirty water being a factor, I’d look for anglers who love a Flippin’ Stick to be effective this year. Denny Brauer, Greg Hackney, Todd Faircloth and Terry Scroggins and brothers, Bobby and Chris Lane could live with a Flippin’ Rod this week and bring big weights home. 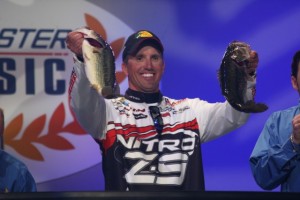 Whatever the case Advanced angler will be on hand at the 2012 Bassmaster Classic for our Classic Raw coverage. Look for daily photo galleries and video interviews from the anglers themselves; at the takeoff, from the Classic Expo and weigh-in all three days as B.A.S.S. crowns another Bassmaster Classic Champion. Our onsite Classic Raw coverage begins this week, as we are boots on the ground with Advanced Angler staffers, Tom Leogrande, Jason Duran and myself Tuesday night in Shreveport.

Check Bassmaster.com for the weigh-ins, then check in with us for interviews with the pros and personalities afterwards. It’s Classic time; we’re ready, are you?