11/29/2011 – Mike McClelland loves tossing jerkbaits. Throwing a stickbait in the cold period immediately before the prespawn is one of his favorite ways to trigger strikes from bass that are lethargic from the cold water temperatures.

In the early spring McClelland makes long casts with the McStick and sweeps the bait to bring it to its diving depth. He then apply subtle pulls with the rod, allowing the bait to suspend in between movements. The pause is important, and range from 10 to 30 seconds long. Bites during this period will often be less than aggressive; the angler may see a slight twitch in his line, or feel extra weight when he goes to move the bait again. 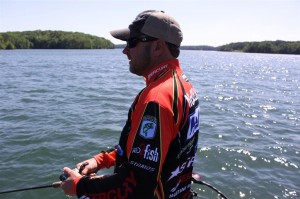 In the early spring, bass are sluggish, and to match their mood requires a bait that will suspend stationary for long periods of time. McClelland’s jerkbait does exactly what an angler needs for those conditions, and with a few modifications to the lure; an angler can make the bait slow sink, or suspend by changing Gamakatsu treble hook sizes or by merely adding a split ring or two as a weight.

Throw all of that out in the fall.

The bass in autumn are often in a crazy, aggressive mood. The turn from hot summer conditions to cooler weather not only makes them feel more comfortable, but it also triggers the movement of baitfish upstream and the bass to follow.

To take advantage of this kind of fall frenzy, an angler must put their fishing into high gear, and they had better become aggressive; especially when jerkbaits are the lure of choice. Anglers need to be ready to move and they need to make the lure react under the water with wild abandon; there are a few keys to making this happen.

Which Bait When?
McClelland developed a pair of jerkbaits with SPRO that will give anglers the options they need for presenting a jerkbait at any level the fish are at. The first bait; the McStick, came out a couple of years ago, and it’s the perfect bait for targeting suspended bass in the early spring, but it will also work extremely well as a high speed slash bait.

The McStick is a bait that runs in the five to seven foot range, and when the fish are suspended anywhere around that level, the McStick has the perfect slashing action to draw fish to it. “The McStick is a long, slender minnow shaped bait that really creates a presence in the water,” he said. “I like the McStick when the water is colder, and the fish come up for a taste of the afternoon sun.”

The McRip is a shorter, but stockier bait with a deeper diving lip that allows him to target depth zones that most baits in the jerkbait category cannot reach. When the fish are holding off of deeper structure, in the 8 to 12 foot range, the McRip is his choice. 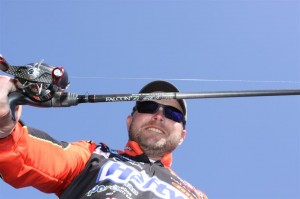 Suspend, Sink or Float?
McClelland believes it is important to have the lure suspend or slowly sink in the water column during spring. However, the fall is different, in fact it can be exactly the opposite; bass want the bait to move quickly and one that slowly floats towards the surface.

Bass will chase a fast moving jerkbait and when it floats toward the surface like a dying shad, they swipe at it. “I tend to pause the baits a little shorter in the fall,” he said. “I prefer more aggressive, erratic actions this time of the year.”

His line choice is different for the autumn. “In the springtime when I’m looking for the bait to suspend, I use Sunline Super Natural Monofilament,” he said. “Super Natural floats and has a tendency to kind of parachute the lure, keeping it from falling as the bait is paused.”

However, when the hovering action of the bait while paused is not an issue, he prefers fluorocarbon. “In the fall however, long pauses are not usually required, so I spool up with Sunline FC Sniper Fluorocarbon,” he said. “When using the McStick, I may go as high as 14-pound-test, but the McRip is different, I prefer to use lighter lines; 10 and 12-pound tests, and I’ve even used 8-pound-test to try to get more depth out of the McRip” 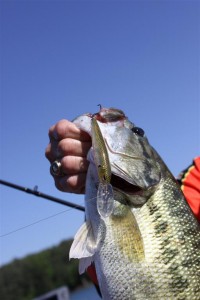 Colors
McClelland lets the conditions of the day dictate the color bait he chooses. For clear water and clear skies he likes Spooky Shad, Clear Chartreuse or Blue Bandit. In clear water with wind, or a little bit of cloud over, then he turns to Norman Flake or Chrome Shad.

SPRO also has a color that is really made for the fall. “Watermelon Red Craw gives anglers the best of both worlds,” he said. “That color gives me the chance to have the aggressive nature of a jerkbait, but will also get the attention of the bottom hugging crawdad eaters that are so prevalent in the fall.”

Bass can become incredibly aggressive in the fall. When anglers try to take advantage of the action and natural flash of a jerkbait, they can help make the most of your day on the water.