Every Rico Has a Story – Brewer Splashdown

Rico story wanted: No big fish needed.
So, after much cajoling and the bribe of sharing the prize of the new Ricos with my husband; should we win, he finally agreed to let me tell our one and only Rico story. Well, most of it, anyway.
A tiny portion has been omitted to protect the innocent; some of our fishing friends have heard all of the details: but, this is a family site.
Foreshadowing 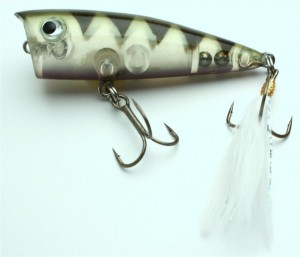 As the Clear Series began to launch, I was given some of the prototype renderings of each of the new baits and the opportunity to shoot some images with one of the designers, the 2010 AAA U.S. Open champ Chris Ricci. When we were done he left me one of the very few Ricci’s Recipe Ricos that had been produced. At the time there were adjustments being made; but he left it with me for pictures and to give a trial Delta run. The importance of this, it was Fall, I witnessed it working and I had it in my possession at the next tournament.

Fast Forward
It’s now a rainy day in October and my husband and I have entered the Restore the Delta tournament. A very good cause, by the way.

Launching out of Russo’s we stopped near the Tract and began to target an area we can usually pick up a fish or two. This is one of the places that I call a “safelight spot” where we would catch “safelight fish”. In “fishergirl-talk”, it translates to the starting spot, the spot you hope you get to before another boat is on it, the place you want to start in the tournament and the fish you get at that spot.

For whatever reason, we didn’t get there that early…not “safelight spot early” and when we did get there…wow, was the striper bite on!

Okay, so I know this is a bad move in a tournament; but yes, we did stay and have some fun catching stripers for longer than we should have in a time-sensitive, competitive “bass” fishing event. I was throwing a Buzzjet, one of my faves; but remembered that I had put the Ricci’s Recipe in my “get-ready box”. This is “fishergirl-talk” for “the Plano that I put everything in, that I will probably use for that day; unless, I change my mind mid-stream, when I see my husband has something working better”.

Okay, so back to the Rico. It was in the “get-ready” box and I thought… “hmmmm, I am so gonna tie that on and whack’ em on it, right now”. As I finished tying it on, my husband came to his senses and said, “We’ve got to go catch some fish we can weigh.” Drat, foiled again, no time to try the Rico; we were making a move. 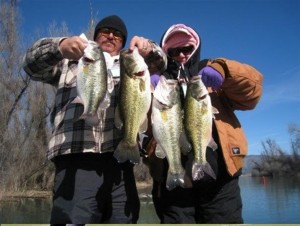 Still near Franks, he positioned us up in the tules, on an island so we could make long casts at the area we thought we wanted. As we got there, Mother Nature called and he had to pee. For me, I have come to believe that when the “boys” pee while fishing, it is good luck; because there is some bizarre phenomenon that happens if a guy makes a cast so his line is out, while he is relieving himself, he inevitably gets a bite and the trauma and drama of trying to complete the two things, hooking and reeling in the fish while trying to finish, shake and zip becomes a hilarious event. This is true, even if your back is to them, because you totally know what the commotion and expletives are caused by.

Again, back to the story… we pull up, he casts and then decides to pee and the bite comes. Whoosh, a big one… all thoughts go to the big fish on the other end of his line and the other task is forgotten by his mind; but not by his body or his pants. His pants fall down, he still has to pee, the fish gets off and we both start laughing.

He is hopping around trying not to pee on the bow of the boat, stunned with a wide-eyed look of shock over the missing fish, with his pants around his ankles in a common area of Franks, just as Bobby Barrack, who is emceeing the tournament motors by.

This makes us both laugh, really laugh.

So, we’re both laughing really, really hard and I see him totally somersault backwards over the edge of my side of the boat. At this point, I am stunned; but it cracked me up as I was thinking my husband just fell overboard doing the “I gotta pee dance”. I knew we’re up on an island, so there was a mere inches to a couple feet of water and basically, no danger and I continued to laugh.

I start to move toward the front of the boat to give him a hand to jump back in, still laughing of course and notice he is bobbing back up to the surface and dog paddling, erratically. I could see the panic on his face and at that moment I realized that he had the “I’m drowning flail” and needed real help. 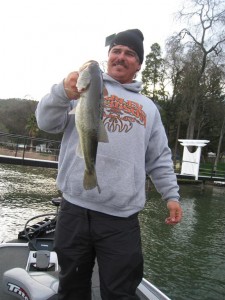 I calmly started repeating, “You’re okay, you’re okay, give me your hand.” Now this seems like it took forever and went it slow motion; but in reality it was probably one to two seconds. He gave me his hand; but the panic was on his ghost-white face and I suddenly realized the problem with laughing so hard that you feel like you’re going to pass out was, he didn’t just feel like… he actually did.

Also my idea of we’re in inches to a foot or so of water so there is no danger, really only works if someone is alert and not blacked out from lack of oxygen to the brain due to an overdose of laughter.

As I am holding on to his arm over the side of the boat he started telling me he was having a dream that he was drowning and he couldn’t breathe. He still looked shaken, wasn’t sure how to get out of the water and wasn’t really aware what just happened. I reassuringly told him, he fell over and it’s very shallow. I held on to his arm for a few minutes until things felt calmer and we talked through what had happened. After a bit, I told him I was sure he could touch bottom and he should just try.

During this time, the boat had been steady against the island and not really affected by the quick-moving tide; but not everything else was as steadfast and within moments, I saw some of his stuff floating off. I had no idea what all was being taken out to sea but I wanted to speed the rescue up and asked him if he thought could stand so I could try and net the stuff floating away, which turned out to be his pants and his rain gear that were around his ankles, that weren’t there any longer.

He hesitantly gave it a try and when he realized he was standing pants-less, only thigh-high in the water we burst into laughter, again.
By the way, he remembers that part and will tell that part a little different; but, let’s just remember who was conscious and who was blacked out.

We retrieved the items we could and he jumped back up into the boat. Like I said, it was raining and we were wet before he took the “Nestea plunge” but now he was drenched. He took off his shoes, socks and shirt and asked what extra clothes we had. “Oh, no problem, I have everything you could ever want in that “emergency red duffle bag”. His response, no I threw that out, it only had clothes and junk in it, it was taking up too much space. 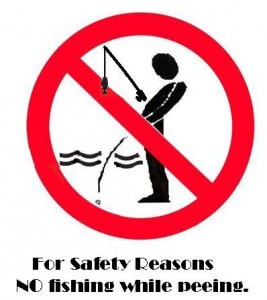 The difference in gender thinking just put a dent in that plan. See translation…
Him: Emergency bag – extra battery, extra oil, trolling motor cables, tools…translation, “something broke, I will fix it and keep fishing”
Me: Emergency bag – extra foul weather gear, gloves, hand warmer packets, beanies, battery operated socks, sunscreen, chapstick, flares, GPS tracker … translation its freezing cold, I need more clothes, if we break down we won’t freeze to death, we will put on nice warm clothes and survive until someone picks up our GPS tracking signal.

That day we both paid the price for the difference in thinking. I often fish with snow pants under snow bibs and if it’s raining Frogg Toggs over that; so I graciously gave up my outermost layer of Toggs for him to wear as bottoms…they were the pink/purple ones. For a shirt he could only find a Halloween hoodie with a broken zipper. You know the ones… they’re black with a glow in dark skeleton on them.

Crisis averted, he was barefoot; but we fished out the remainder of the tournament, mostly trying to avoid fits of laughter at the sight of his ensemble. If you’ve got the whole picture…you understand, he wouldn’t have really passed any of the tests on the “no shirt, no shoes, no service” sign.
He had nothing on but pink pants rolled up to his mid-calf, no shoes and he was shirtless with the Halloween hoodie zipped down to his belly button because it wouldn’t zip up any further. He was lookin’ pretty Rico Suave, himself.

We started back to weigh-in and made the plan to get there before any flights were due. I was going to take the fish up early, so he could “hide” in the boat and we could get out of there, unnoticed. I guess we forgot there is nothing on the down-low at a dock in Russo’s. We pulled up with our covert plan in action and before we could even get to the dock, someone was waving at us.

“Hey Brian and Jody, you guys, getting’ anything,” we heard being yelled from in front of the gas tank. Hmmmm, not really an “under the radar” entrance… Another greeting …. And someone waving us in. Yikes, all I could do was wonder, “what are all these people doing here so early?”

As we got closer, we noticed it wasn’t others from the tournament it was Mike Folkestad and friends, pre fishing for an upcoming tournament.

Folkestad stoically stood on the dock in his coordinated foul-weather gear while eyeing my husband’s outfit up and down. He tactfully said, “That’s an interesting suit,” as he told of where we could find something like he was wearing, “which might be better for this type weather”.

The returning Restore the Delta boats were coming up behind us, we looked at each other and again amidst the laughter started dumping our fish overboard out of the livewell. We said our quick goodbyes and high-tailed it back to the East Delta where we had launched; just glad the day was over.

What about the Rico, you ask?

My Rico story didn’t end as good as the O’Sullivans with their Ricos both tucked back safely into the tackle box. Somewhere along the line the Rico went missing in action, not just the Rico… the rod, the reel and the Rico…all long gone. I don’t know where, I don’t when….I just know the one and only Rico that I ever had, I never got to try and that’s my Rico story.