Never Too Old to Learn

Our motto here at Advanced Angler is to elevate fishing to the next level. Our intent is to provide our readers with the kind of information that can help them improve as anglers. We do that mainly through our feature articles. 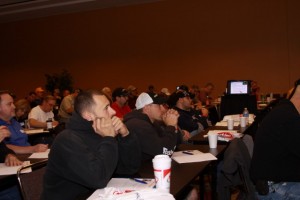 In those pieces we pick the brains of the best anglers in the business in an attempt to crack open their knowledge base and spill it out on the screen in front of you. Our goal is to see you be able to take the things you read here and go attempt to learn them in systematic fashion.

We want you to be able to know what type of lure, what type of line, what type of equipment and where to try it to have the best chance of success. Sure, we believe that professional anglers should have the right to promote their sponsors and providing you with the exact equipment is what we try to do. Regardless of whatever product you choose to employ, using the lesson as a guideline can help you learn – or improve upon – a new technique.

When we got the invitation to attend The Bass University as the official presenting website for the Worcester, Mass. session, we jumped at the chance. The Bass University is owned by professional anglers Mike Iaconelli and Pete Gluszek, and their motto for the sessions is Never Stop Learning.

With TBU working to educate anglers, as we set out to do, the weekend marriage between the two organizations couldn’t have been more perfect if it were arranged by a king. Throughout the weekend, students are given some very in depth lessons to help them become better anglers. They have the opportunity to interact with some of the best anglers in the sport, and walk away with tips to use the very next time they hit the water.

Many of the students at the Worcester event were multiple time attendees. Some of them flew in from out of state, and all of them were eager to pick up any little tip they could. The instructors for the University were Iaconelli, John Crews and David Walker for the first day, and Gluszek, Mark Davis and Gary Klein for the second day.

I’ve personally been privileged to spend one on one time in the boat with four of those six individuals working on articles, and I’ve spent a lot of time with Klein over the phone and in person during interviews for articles with him and about his Flippin’ mentor Dee Thomas. I’ve yet to work on much with Walker, but after listening to his seminars, I’m looking forward to doing so in the future. 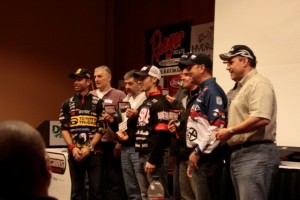 What I walked away from The Bass University thinking was; with everything I’ve been privileged to learn, I don’t know anything.

Review
First; in review, let me say that all of the “professors” were very thorough and their audio / visual presentations provided as much detail as anyone would want to get in the seminars. The sessions are broken up so that each speaker does a morning and an afternoon session, then there are a breakout session in the morning, and a final question and answer period in the afternoon.

Crews and Walker covered Flippin’ and Pitchin’ in their morning sessions then discussed crankbaits and the different types of jigs in the afternoon while Ike covered crankbaits and finesse fishing on day one. Gluszek highlighted a series of smallmouth bass strategies and Davis covered offshore crankbaits and swimbaits while Klein really delved into helping anglers learn to identify their strengths and weaknesses to improve their fishing.

Despite being able to spend significant amounts of time with most of these anglers in the past, I was able to personally pick up several things that I believe will help me catch more fish in the future. Getting an opportunity to listen to Klein discuss some fairly in-depth topics with the anglers was mesmerizing. He really goes into very fine detail on many techniques and watching student fill books worth of notes was not surprising.

Miracles
I have to say that I believe I witnessed a miracle occur at The Bass University on Saturday. Bassmaster writer Don Barone drove the hour and a half to Worcester from his Connecticut home to visit with friends and interview some of the professionals in a different setting.

When DB (as he is called by fans and friends) arrived on site, there was a table full of two amply supplied trays of donuts. Barone has always been public about his love for deep fried pastries; especially the ones filled with jelly, but on this day, he would not succumb to their beckoning.

Not only did he forgo the donuts, but he would also choose a salad for his lunch, but also for the main course of his dinner that night as well. Barone has written publicly about his weight loss goals, and to see him exercise will power was encouraging, and a good example for me as well. I am working on changing my life as well, and I too passed on the donut table, had wraps for lunch instead of burgers and hot dogs and went the salad route for dinner. 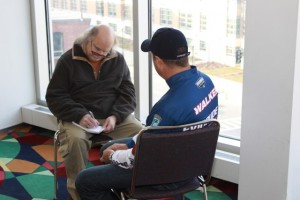 While I was there to cover a fishing classroom event, and maybe even learn a little bit for myself, it looks as though I have learned a little bit about wills while I attended Bass University; and I have a buddy in the battle against the bulge as well.

Wrapping Up
What I can say about The Bass University is this. I have been to two of these sessions put on by Iaconelli and Gluszek sine they began their venture in 2010. I was at the Sacramento session in 2010, and once again at Worcester last weekend – both times as a media representative.

I was a fan of the intimacy of the experience in Sacramento, as well as the organization that they put into the sessions, and that respect for the program grew even more after seeing it two years later. The ability for the “average angler” to rub elbows with the pros is unbelievable, and to learn from them in such an intimate setting is priceless.

But, even more importantly; the program allows people to connect around something that they love to do builds camaraderie amongst attendees. Some of the regular attendees seemed to have bonded in the class, and it appeared that they have not only learned through the experiences, but have built relationships there as well.

On my part; I experienced the same. I was able to learn in the classroom setting, and in conversation with the pros outside of class as well. I was able to reminisce, hear stories of traditions of bass fishing old; strengthen old friendships and forge new ones along the way.

Never too old to learn, and you don’t get to experience things if you don’t give them a try.