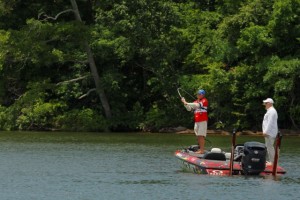 Most people consider spoons heavy jigging lures for ripping in a vertical presentation for bait chasing, suspended bass. Thanks to Elite Series pro Kelly Jordon, who made waves in an episode of Ultimate Match Fishing by using a metal bait to catch more than 20 pounds of bass in less than 10 minutes, the flutter spoon became a phenomenon.

Despite the fact that Jordon lost UMF in the final minutes to Boyd Duckett, anglers across the country sought to find out he was throwing. Until that point, the flutter spoon, had been a closely guarded secret, and it almost failed to make it out of the tackle box that day.

“I almost didn’t throw it that day because I wasn’t sure I wanted to let it out,” Jordon revealed. “But, when I had a chance to win the finals, I decided it was time; too bad it didn’t work out.”

As a guide on Texas’ famed Lake Fork, Jordon has used big spoons to mimic large baitfish for years, and the UMF finals was not the first time he used it in competition. “I used it at a Kentucky Lake Elite Series event in 2006 when Morizo (Shimizu) won there,” he said. “I found fish on deep ledges, the only thing they’d bite was that spoon.” Jordon finished 11th.

Casting spoons is not a new technique, but this type, first made popular by Joe Spaits of Weedless Lures near Lake Fork, is. Spaits’ Big Joe Spoon is a large, cupped, metal drop bait that anglers can employ by making long casts to structure related bass. 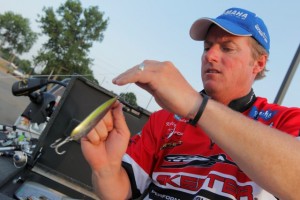 “Joe (Spaits) is the one who made this bait work for bass fishing,” Jordon said. “Lake Fork anglers have been killing bass on them for years; it’s steadily starting to get out to the rest of the country.”

Despite measuring five and seven inches, Jordon said the size shouldn’t intimidate people too much. “The bass in all of our lakes eat big baitfish all the time, and these baits are a perfect match for them.”

Jordon said that the size and weight of the lures requires heavy tackle. “I spool 15-pound-test Fluorocarbon on a 6.3:1 Duckett Fishing 360R,” he revealed. “My 7’6″ Duckett Fishing White Ice rod is perfect for this technique, because it handles the bait well.”

He said that he has two main retrieves that he uses when fishing the spoons. “Most of the time I hop it like a worm,” he said. “But, sometimes I sweep it up and let it fall like I would when stroking a jig.” He said that strikes occur on the fall, and said that setting the hook hard is important, “When they strike this bait, they’ve got it, so hit them hard,” he recommended.

Strike King also took notice and came out with a version of their own, the Sexy Spoon. Staffers Mark Menendez and James Niggemeyer said that it is a tool that they use to find and catch bass, albeit under different circumstances.

“I use it primarily in cold water,” Menendez said. “I use them as a first strike and search lure when the fish are suspended or holding off ledges, like they do on Kentucky Lake.”

The Paducah, Ky. pro said the key to the Sexy Spoon is the slow fall, which is important when his quarry are in a foul mood. “The cupped shape makes the spoon drop and flutter slowly in front of the fish so they have to look at it longer,” he revealed. 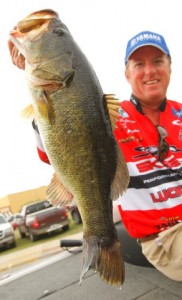 Like Jordon, Menendez uses stout tackle to throw flutter spoons. “I use a seven-foot medium heavy Team Lew’s Rod and a 6.4:1 Lew’s BB1 Pro spooled with 12 to 15-pound fluorocarbon line,” he said. “I tend to lift and drop it on structure, and swim it for suspended fish.”

Niggemeyer, who also guides on Lake Fork, said his first thought when he saw the Sexy Spoon was to jokingly ask himself, “how do I flip this?” However, he has come to appreciate the bait. “The beauty of our bait is that it has great paintjobs on chromed finishes; they look very natural in the water.”

The Texan also favors long rods and heavy tackle, choosing to throw the big spoons on a seven-foot medium heavy St. Croix Legend Tournament and Ardent Apex with 15 to 20-pound Gamma Edge fluorocarbon. “The stout gear helps me to rip the bait off the bottom,” Niggemeyer reported. “90% of the time the strikes occur on the fall and it helps to have the power to set the hook when they strike.”

He also said that being on the forefront of presenting new lures is often a key to success. “Bass are all about reacting to what’s new, and not too many people are throwing these, bass are curious, and that alone generates strikes.

All three said that they use flutter spoons as offshore tools, targeting depths from 10 feet or deeper and they throw them on many kinds of structure. “They work on humps, ledges, points and roadbeds,” Jordon said. “Once people start throwing them, they will see how effective they are.”