April is a time of transition for bass anglers across the country. Except for those located in the Deep South, bass across most of the country will be moving out of their winter haunts and beginning the annual migration to their spawning grounds. This transition can make locating bass a little tricky, but once found they are usually hungry, because they need to eat as much as they can before beginning the stressful spawning routine.

Because of the aforementioned need to feed, pre-spawn bass fishing can be some of the most exciting fishing of the year for both numbers and size, as heavy spawn-laden females come to the scales in almost every pre-spawn tournament.

We have quite a stable of great springtime sticks on the Denali Tour-level staff, so we thought it would be a good idea to check in with several this month for their favorite pre-spawn techniques. You may want to give a couple a try while out on the water this April.

Charlie Evans – Go Wacky
Denali and FLW Tour pro Charlie Evans has been fishing tournaments competitively since 1971. During that time he has been fortunate enough to fish some of the best bass lakes in the country, often multiple times over his career and during all seasons. 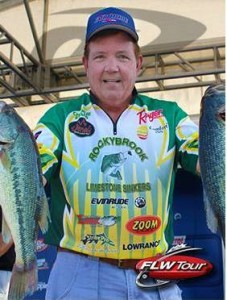 After fishing that many places at that many times of the year, Evans has out of necessity become a huge proponent of techniques that catch fish everywhere he goes through the course of a tournament year. “I like to keep it simple, and use things that catch fish from coast to coast because we don’t have a ton of time to practice for Tour events. During the pre-spawn, there’s nothing that catches more fish than a wacky worm.”

Pre-spawn fish may hold on a variety of structures depending on where you are regionally, but they generally all have one thing in common, they are shallow. The wacky worm is a killer in shallow water, and Evans has caught so many fish on it that he never leaves the dock in the springtime without one on his front deck, saying “I’m not sure what it is about that thing, but they can’t resist it. I’ve seen fish come from 20 feet away to eat a slow shimmying wacky worm.”

Evans targets cover and structure in close proximity to spawning areas as well as the actual flats themselves. “I like to cover a lot of water and throw that worm up next to anything I come across. It doesn’t have to be much, sometimes just a little stick is enough to hold a giant bass. The wacky worm casts well and also skips a mile, so you can efficiently target just about any type of cover or structure.”

Gear
The wacky worming setup Evans uses is, just like the technique, pretty simple. He starts with a Denali Noirwood 7′ medium power spinning rod paired with a 2000 size Team Lews Gold spinning reel spooled with 6 or 10lb Tuff Line Supercast braid. About the rod, Evans thinks that throwing a wacky rig requires a specific action that the Noirwood model has in spades. “When you’re throwing a wacky rig, it’s very light so you need a flexible enough tip to make long casts. You’re also usually fishing around cover so you need the rod to still maintain enough backbone to get a big one turned. It seems like that Noirwood rod was designed specifically for wacky worming and I’ve caught tons of fish on it.”

At the business end of his setup, Evans ties a 1/0 Gamakatsu straight shank hook to which he hooks an original Zoom Finesse Worm or Trick Worm depending on the size of the fish in the waterbody, and the water color.

As far as bait colors go, Evans jokingly maintains a pretty complex scheme, saying “I use a bunch of colors for my wacky worm, as long as they are all green pumpkin.” One detail that he does integrate however is to always dye the tail chartreuse, dying an inch or two in dirtier water and just a little tip in clear water.

Another rigging tip Evans offers regarding wacky worming is to use a split ring the same way a lot of anglers use o-rings when fishing Senkos. “I use a split ring just slightly smaller than the diameter of the finesse worm and slide it onto the egg sac. Hook your bait through the split ring and you can fish one worm most of the day.”

Rich Dalbey – Make it Chatter
Hailing from Texas, FLW Pro Rich Dalbey knows what it is like to catch big bass during the pre-spawn window. The Texas reservoirs he calls home are notorious for pounding out big bass after big bass each spring. Being that they are almost all lowland impoundments, they also feature mostly shallow contours and an abundance of timber, both in stumps and standing timber. 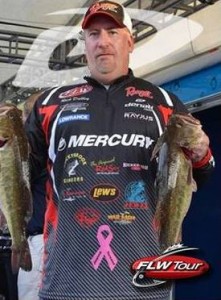 The pre-spawn bite on lowland reservoirs revolves around the concept of drains. Drains are little ditches and channels that cut through expansive flats; giving bass natural corridors for traveling shallow from deeper water. Dalbey’s favorite pre-spawn tactic is to fish drains with a vibrating jig, something he has employed to great success over his short career as a tournament pro. “Drains are bass magnets in the springtime.” Dalbey says, continuing “Every fish that comes out of deep water is going to follow one back to the spawning flats and stop on little pieces of cover or grass along the way.”

Typically, Dalbey will identify a likely drain using his contour map or sonar, then start fishing it from deep to shallow, throwing a chatterbait along the edge and around any grass or timber that is present. “The ditches I’m fishing in the spring are usually only a couple feet deeper than the surrounding flat, and since they were once creek channels before the reservoir flooded, they have timber and rocks all along their length. In lakes with grass, the grassbeds often grow right to the edges as well, providing great cover for incoming prespawners.”

Dalbey likes the vibrating jig to target drains because it comes through cover well, works in a variety of water colors, and triggers bites from extremely big bass. “When you are fishing pre-spawn fish around drains, you are trying to trigger the big females that may be laying up in the ditches waiting to go and spawn. A vibrating jig has the commotion to trigger aggressive feeding strikes even in dirty water, and it comes through grass and wood very well.”

Gear
Dalbey’s vibrating jig setup starts with the 7’2″ Kovert Heavy power rod paired with a Lews Tournament Pro reel spooled with 17lb fluorocarbon. Dalbey thinks that the heavy action rod is a necessity for pre-spawners, saying “A lot of times you’ll be catching five plus pound fish, and if you don’t have a heavy enough rod, those big ones can get you up on the flat and wrap you around some timber. The Kovert heavy action rod has plenty of backbone to turn even the biggest fish.”

Life in the vibrating jig business has been pretty interesting lately and by the time you find one that you like, it’s probably no longer available. Dalbey has used several different models, and has one such discontinued model that he prefers, but he thinks that just about any vibrating jig will work. The key he says, is to “make sure it comes through cover well and has a strong hook, because those big pre-spawners will blast it.”

Most of the time, he uses a green pumpkin jig tipped with a 4″ Lake Fork Tackle Live Magic Shad to try and emulate a bluegill, which is what most of the pre-spawn fish are feeding on.

Michael Murphy – Throw a Blade
In the lakes and reservoirs around the South Carolina home of veteran pro Michael Murphy, there isn’t nearly the grass, vegetation, and cover that can be found in other places. The bass are still there in big numbers though, and when they move up to spawn Murphy’s favorite way to intercept them is by throwing a spinnerbait. 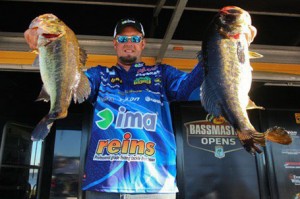 “There’s just something special about an old fashioned spinnerbait.” opines Murphy, continuing “When they start moving up around here it is one of the most efficient and fun ways to cover water to quickly locate them.”

Murphy thinks the best time to target pre-spawners with a spinnerbait is about two weeks before the fish actually begin the spawning ritual. Once the water temp climbs into the mid 50’s, Murphy starts fishing 45 degree banks, rip rap, rocks, and docks near well-known spawning areas. “The first areas of hard cover close to spawning areas are where the fish will hold all the way up until they go to bed. I start hitting places like that pretty early, even while I’m still fishing winter stuff, because you want to know precisely when they start loading up, because it’s a blast. You’ll also often notice that the weights start to dramatically increase at local tournaments once it starts, because all of a sudden everyone will start smoking them.”

Gear
Murphy fishes spinnerbaits primarily on the Denali 7’4″ Medium Heavy Mark Tyler Signature Series rod paired with a 6.4:1 Lews BB1 Pro baitcasting reel. About the setup, Murphy says “I think one of the most important things about spinnerbait fishing is to be able to make long casts and have an action just slow enough to allow the fish to really get the bait. That 7’4″ Signature Series rod is absolutely perfect. It launches spinnerbaits a mile even in the wind, and when a fish loads on it doesn’t pull the bait away from it. A lot of the strikes are visible this time of year, and I love that slightly slower rod so that even if I jerk early, the hook still connects.”

Murphy’s favorite spinnerbaits are made by Hildebrandt, and 99 percent of the time, he throws a half ounce model in either white or white/chartreuse. He also almost always adds a trailer of some sort, either a single 5″ Kalins grub, or an Optimum Victory tail soft jerkbait, saying “I think adding a trailer gives the bait a more realistic profile, as well as a better target.”