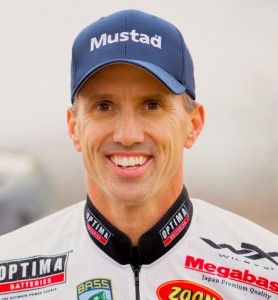 Doral, Florida February 16, 2015 – When Edwin Evers hits the water in the Bassmaster Elite Series this year he will be fishing as a member of Team Mustad.

Heading into his 16th professional season, “E2” is one of the most successful and popular anglers in Bassmaster Elite Series®. Evers’ ability to quickly adapt to different fishing conditions and master different species of bass has brought him 8 Elite Series Tournament titles (finishing in the top ten 57 times). His skill, consistency, and competitiveness has made him a 14 time Bassmaster Classic qualifier; finishing inside the Top 10 in the Angler of the Year race 4 of the past 5 years. Aside from his Elite Series accomplishments, Edwin was the 2013 Challenge Cup Winner in the Major League Fishing Series, and is also a Co-Host on the very popular “The Bass Pros” television show and video series.

“We are extremely excited to have Edwin join our team, “says Mustad Sales Manager Steve Tagami. “He has built a great career and following with a record of accomplishment that speaks for itself. His personal reputation is top notch, and there is a tremendous amount of mutual respect and appreciation between Edwin and his fan base. He loves to educate and it really shows in the quality of his seminars, articles, and videos. Edwin just gets it done!”

Evers says, “Fishing against a high level of competition like I do, it is absolutely critical that I am confident in everything I use. I have always fished Mustad because I totally believe in the product. The hook is one of, if not the, most important part of anyone’s fishing equipment, and you can depend on Mustad UltraPoint Hooks to be super strong, and stay sharp. It makes a big difference in your day and your season when you don’t have to constantly sharpen or change your hooks.”

To match his versatility, Evers’ is fishing a wide variety of Mustad UltraPoint™ Series Hooks featuring 4.3 Stay Sharp Technology, including the following models: