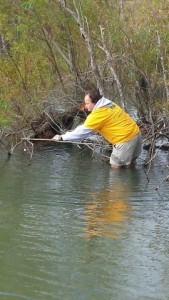 Danny Avena is always happy to help the kids fish even if it means getting wet.

Being an outdoor writer, avid angler, and tackle modification freak, you might think the day I look forward to the most each year would probably involve me actually fishing or at least playing with tackle. You might perhaps assume it’s the first day of ICAST, The Classic, or even on a more personal note the day the ice on my local lake breaks up. While all those are great days; the day I most look forward to is ironically one where I am relatively guaranteed NOT to do any fishing at all.

That day is a Saturday – usually early in October, though I think about it year round. It’s the day I jump in my car a little after 3:00AM and take the two and half hour hour jaunt from my house in North Jersey to the farmlands of South Jersey and show up bright and early at the family home of FLW Tour pro, soon to be B.A.S.S. Elite Series Pro Adrian Avena. Though I love walking into the kitchen and seeing one of his parents smiling faces while they hand me a cup of coffee. It’s all second to the reason why I’m there that day. This is the day I get to help Adrian, his family, and his local community host their annual youth fishing tournament at the pond inside South Vineland Park in Vineland, NJ. 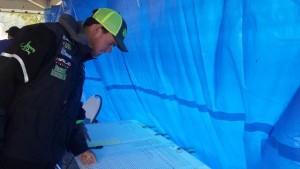 Adrian Avena checks anglers in on the leaderboard

Adrian started this event three years ago with the intent to not only help local community charities but to personally help the children of the community with an opportunity to come together and experience fishing and competition in a fun & educational manner. It’s been my honor to be there to help out each of the last three years, interact with the kids, and watch the event grow.

The event is a fun day that includes an open species fishing tournament for kids up to 15 years old. They are separated into three age divisions with separate prizes and trophies for the biggest and most fish caught. The tournament is followed by food and raffle prizes in the pavilion.

During the tournament it’s fun to walk around and hang out with different groups and ages of kids and check out how they fish and see what their interest level is like. You can see the pure passion and joy in the simplicity of the catch with youth anglers; and they’re just as happy to hang out by the kiddie pool where the fish are kept after weigh in and learn about them. Seeing the love of the sport grow on someone’s face before your own eyes is an experience that never gets old. 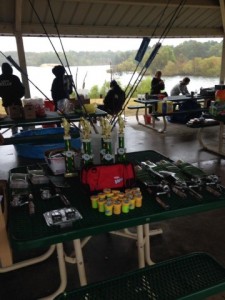 Prizes & trophies for the tournament winners

Although the weather hasn’t always cooperated, keeping the turnout smaller than I think it could be on occasion, the event always runs rain or shine. Even when it was pouring down rain intermittently this year, the joyous grins on the faces of those who did make it out would lead you to think otherwise.

In its short existence this event has not only helped bring new anglers into the sport but also brought some precious money to local charities where Adrian grew up, like the Challengers League of Vineland. It has also helped reinforce the true meaning of the sport to myself and others who attend to help out. From local anglers to ex-participants now too old to compete, I keep seeing the same faces there each year ready to pitch in and help the kids catch fish. As I said it is the day I look forward most every year, and truthfully I found myself thinking about next year’s event even before this year’s was half over.

Running these kids events may seem daunting to some, but it’s actually pretty easy to make happen and certainly worth the effort. I know a lot of pro anglers and bass clubs are already running them in their communities but I encourage anglers of all levels and backgrounds to either give organizing a youth event a shot or at least help someone else with theirs. 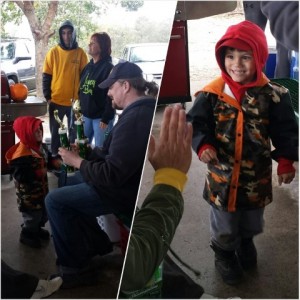 The Avena’s event follows a simple format that is easily replicable around most of the county. They pick a small body of water with a variety of fish in it to run the tournament as an open species event; meaning any fish are legal. They charge a minimal fee for entry which includes a few raffle tickets and worms.

Although anglers are encouraged to bring their own rods and reels there are always a few extra poles lying around for use too. They have simple to handle food like hot dogs and plenty of awesome prizes donated by local businesses and sponsors to win. Everyone has a great time, kids learn to fish, and all of the funds get donated to charity – that’s a recipe for success.

It can be a huge sponsor funded mega-event or just a local get together put on with pocket change. The important part is that you get out and teach young anglers about fishing and help spread the joy of the catch with them.

Who knows, a day where you don’t fish might become your favorite day of the year too. 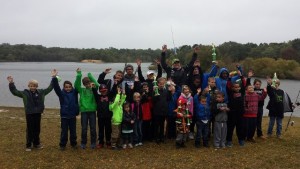