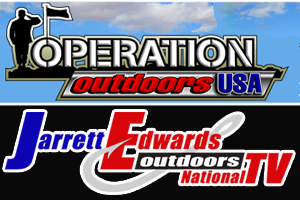 Hello Advanced Angler followers! My name is Jarrett Edwards, I’m 31 years old and the fishing industry is all I have ever known. My obsession with the competitive side of the business began while I was in high school in Del Norte Colorado. Now imagine living at 8000 feet elevation and having to travel one hour over one of the world’s most deadly passes (Wolf Creek, 12,000 ft) just to try and catch a bass. Well that was my life during high school, every day after school traveling over Wolf Creek Pass to Echo Canyon reservoir. Fortunately for me I was lucky to have caught and landed the Colorado state record for largemouth Bass. Even though I knew the fish lived there I was certainly surprised when I caught it. It was a bitter sweet moment because it was the first fish I ever caught on a Carolina rig!

After school I moved to beautiful Lake Powell, where I began guiding for stripers and bass. This was a lot of fun and work as I began cutting my teeth on some of the most finicky fish in the west. It was at this point when I realized that light line (Meaning 4 pound test) certainly will get the average angler more bites. I quickly fell in love with the lake, after all I really don’t know of anyone who doesn’t like Lake Powell. Today Powell is the second largest manmade lake (2nd to Mead) and is 186 miles long with 96 amazing side canyons. The lake is humongous as it has nearly 2000 miles of shorelines and in my humble opinion is America’s most scenic lake (Basically Grand Canyon with water in it). I came to Powell for the first time for a Bassmaster event in 1999. If I’m correct I never had a keeper bite in all three days of competition, this made me furious yet gave me the hunger to move to this magical place and try and figure things out! Throughout guiding I would continue fishing the Bassmaster western opens trying to earn a spot on the back then Top 150 tour. As luck would have it in 2003 I was fortunate to have the opportunity to fish against some of the world’s Elite anglers, and I have to tell you it was every bit as hard as I thought it was going to be!

In 2005, at age 25 I remember feeling a lump above my left collarbone while in official practice for the Lake Norman Bassmaster tour event. I remember one Friday I was standing in line picking up my check at the BASS trailer and the next Friday I was getting a port installed in my chest for Cancer – crazy times coming for sure. Over the next several months we began strong chemo and radiation to treat the 3 egg size tumors in my throat and a large fist and a half size tumor in the center of my chest. I have to tell you that I was very blessed on many levels to survive the disease. First off having an amazing wife, family and sponsors were blessings in disguise. One might look and ask why sponsors were mentioned with family etc. The reason is that we have always made our complete living off of our partnerships. I was very concerned that when many of our partners found out I was sick that they were going to drop me…thankfully they stuck with us. Our partnerships in many ways are like a large family and I wouldn’t have it any other way! 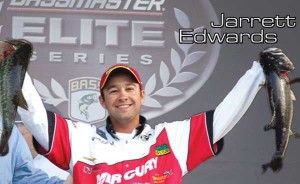 Coming out of cancer made me stronger in many ways. My faith in the lord was at an all time high as well as my focus on my career ahead of us. Heading into the inaugural season of the Bassmaster Elite we were excited about things to come, however something was missing…My motivation.

I decided it was time for a change in life. Cancer really woke me up and made me realize that you have one chance at life and one better make the most of it! I had always wanted to produce a national fishing show that was dedicated to the west coast angler so in 2008 we launched Jarrett Edwards Outdoors National TV. The show has taken off above our expectations for being a pretty new show (entering season 4). My motivation for the show was basically the lack of western fishing shows; it appears that most shows are shot from Texas to Florida. I wanted to change this to give the west coast viewer a first class HD production shot with aerial and underwater dive shots on his or her home water. Although that portion was a home run it was surprising to hear from the many anglers who enjoy the show east of the Mississippi. Many of those anglers have emailed in saying that they appreciate the fresh techniques. What an honor to hear those comments.

We are also very excited to announce the largest ever give back to the troops within the outdoors with our new soldier program “Operation Outdoors USA”. However I’m out of room for this blog so please check out the next one!