Dave Lefebre – Relaxing Christmas Christmas with the Kids on the Ice

I’ve got to admit that it’s been a pretty boring week. Not in a bad way, but just kind of run of the mill.

Outside of Christmas celebrations I spent most of it sitting in my ice fishing hut.

Christmas Eve was a lot of fun, I took the kids out on the ice with me, and it was my daughter Macy’s first time. The kids seem to need activity the whole time, not that they are so impatient that they have to be catching fish all of the time, but they really get a kick out of watching my Vexilar flasher on the ice.

Vexilar makes a portable unit that they’ll watch to see if the fish are nearby. If they see them on the meter, they’ll get excited about fishing, because they can actually watch them swim over and strike the jig on it. They like fishing with the video game.

I finally figured out the best place to catch the big crappie, they’re about an hour and half away from my house so it mean extra effort, but it’s worth it. The big crappie are what I want to catch under the ice, they make for great fish fry later.

I really worked hard following the last tournament of my season to get as much of my business stuff completed before the holidays. Because of that, I’m pretty much in prep for fishing mode, which also gives me a little more time to play on the ice. 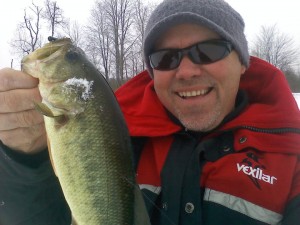 One of the more recent business things I’ve handled was getting my prescription over to Dr. Gary Nesty at Solar Bat so that my glasses can be put together. He did a pretty cool thing with Chevy this year, he’s making a pair of glasses that will feature the Chevy emblem. Now I get to represent two of my sponsors with my face; that will be pretty cool.

I’m waiting for a little more business stuff to finalize, but I should be able to share some news with you soon.

For more about Dave, visit his website at: www.davelefebre.com