The truest sign that Japanese fishing tackle has penetrated the US market comes away from the usual, east and west coast markets, and lands smack in the middle of the country.

Drive around Ozark region lakes like Table Rock and stop into any little tackle store or bait shop, even gas stations, and you’ll find Megabass Ito Vision 110 jerkbaits for sale. They were the “secret of the pros” less than a decade ago, available occasionally on EBay and then only for exorbitant prices. Now they’re everywhere. 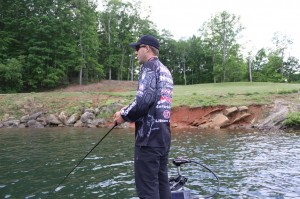 But while Japanese lures have gone mainstream, the depths of the key companies’ lineups remain something of a mystery. While many serious competitors have taken the plunge on lures like the Vision 110 and the Giant Dog-X topwater (also from Megabass), they have trouble plunking down fifteen, twenty or even thirty dollars for something that hasn’t fully made its mark in national tournament competition.

That’s where Aaron Martens comes in.

While the Megabass USA pro staff includes stalwart pros like Randy Blaukat, Shin Fukae and Luke Clausen, in the public eye no one is as closely identified with the company as AMart. On top of that, there may be no greater lure tinkerer out there, either. So we asked him, if you could recommend two lures in the Megabass lineup that savvy anglers need to add to their arsenal, which would they be?

The first one isn’t really a radical departure from the norm, but Martens feels it’s important to note that the Vision 110 Magnum is an important part of his everyday repertoire, and not just on big fish lakes like Guntersville or Clear Lake. Despite the “110” moniker, it’s actually a bigger jerkbait than its brother – a little over 5 inches and ¾ ounce versus 4 1/3 inches and ½ ounce for the original. 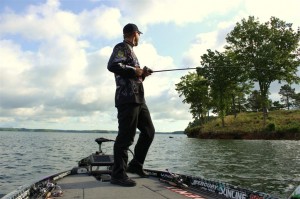 “I wasn’t sure about it at first,” Martens said. “How could you improve on the original? But now I prefer it in almost every situation, especially if the water is 55 degrees or up.”

On a typical jerkbait retrieve, the Magnum doesn’t dive as deep as the standard 110, which Megabass said dives as far as 6 feet under, but it can be used to target fish at any depths – because it sinks slowly. Additionally, the action is slightly different, a bit more extreme. “It swims like a fish,” Martens said. “It has a really good shudder to it.” He added that it casts better than original, not just because it weighs 50 percent more, but also because it has a different weighting system.

This year, Martens used the lure successfully (either in practice or tournaments, or both) on lakes like Toledo Bend and Murray, predominantly post-spawn events. He said it was also fantastic on the spotted bass at Lanier and in the mixed largemouth/smallmouth fishery of Champlain, just a few weeks ago. Unlike February and March, when he often fishes the 110 with painful pauses, in each of those later events he found the fish to be more active and tailored his retrieve accordingly. The key is to remember that it’s not a seasonally-specific lure – “You can fish it all year long,” he said.

“I work it more like what we’d call a ‘ripbait’ back in California,” he said. “I give it more of a sweeping motion. Even if they just want it twitching, I won’t pause nearly as much.” 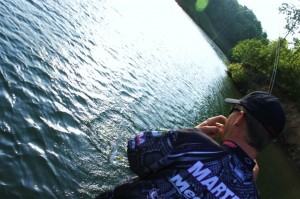 While Martens has historically fished his jerkbaits on fluorocarbon, lately he’s experimented with Sunline 20 lb. braid paired with a two foot leader of 16 lb. test Sunline Shooter. “The braid makes it 50 percent easier to ‘jerk the lip off,’” he explained. His rod of choice is the Megabass Destroyer Racing Condition F5-72XRC, a 7’2” medium action, 5-power stick rated for ¼ to 1 ounce lures.

His second recommended lure anglers willing to do more than dip a toe in the Megabass pool is the XPod topwater lure. While he’s used both the Giant Dog-X walking bait and the Pop-X and other poppers for years, this lure provides the best attributes of both. With seven different lip settings, immediately customizable by the angler with no tools requires, “you can change it from a normal walking bait to half chugger, half walker,” he said. “It can go from quiet to obnoxious.”

Martens most frequently fishes the lip “three clicks down, so it walks real good but chugs, too.” He particularly likes this lure in the fall, primarily because it’s louder than either of the other two lure categories it builds upon.

“This times of year they want a bait that’s noisier and splashes a lot,” he said. “On flat calm spring days they may like a quiet popper, but on Guntersville right now all you need is the XPod.” 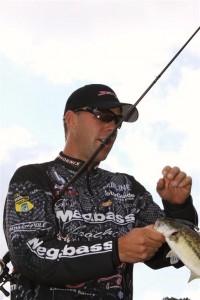 The original version of the lure is 4 ¼ inches and ¾ ounces, but unlike the Vision 110, which gave way to a larger version, with this lure Megabass has gone from large to smaller with the introduction of the new XPod Jr., a 3 ½ inch, ½ ounce model. Martens said this will likely be a more valuable version for the average angler, particularly in areas where the baitfish are smaller. He’s used the full range of paint schemes, but for anglers looking to invest in just one of these lures he recommended GG Bass as a good all-around color option.

Once again, he fishes this lure on the F5-72XRC. He also uses the braid-to-fluoro connection, which allows the lure to maintain its action but also allows for rock-solid hooksets on long casts.

Martens isn’t going to let go of all of his tricks easily. In fact, for every horsey head, Shakey Fish or hair jig he uses that gets captured on film, he probably has two or three more secrets that he’s loathe to reveal. But these two members of the Megabass lineup are baits that he uses on an everyday basis – and baits that are readily available to every angler out there. Throw the lures that the bait freak throws. He’s done the research so you can reap the benefits.