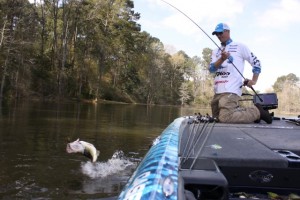 Casey Ashley, from Donalds, S.C. is primarily known for his offshore fishing prowess, and with good reason.  The majority of Ashley’s tour level wins, including his 2015 Bassmaster Classic which he added to his resume just last month, have been won offshore.

However, Ashley’s favorite way to fish is to get into shallow water and grind it out with a Flippin’ Rod.

We learned that at the Toyota / Quantum / Carhartt Media Event on Toledo Bend Reservoir, and Ashley demonstrated why he likes gettin’ down and dirty in spring during high water periods.