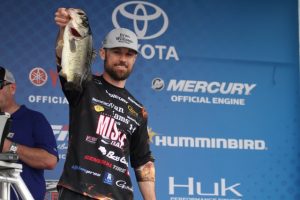 John Crews on stage at a Bassmaster Elite Series Event

Creature Baits are awesome.  They provide the angler with many advantages that help put fish in the boat.  Because they have a larger profile than the soft plastic baits that came before them, they appeal to larger bass without being too large for a keeper sized bass.  They also allow an angler to present those larger offerings in places a jig can’t efficiently go because they are Texas Rigged.

This style of bait offers many variations.  They come with curly tails or straight, flat tails; they are available in slick sides, or those with flapping appendages.  Some are made on ribbed bodies, some have smooth bodies, and they come in a variety of sizes.

We sought the advice of an expert who not only makes his living using them, but also manufactures them to get his take on the subject.  As someone who has built one of the fastest growing new brands in the fishing industry making soft plastics, John Crews knows all facets of the creature bait; from design, to construction and application.

Crews said he can understand that anglers face a dilemma when standing in a tackle store looking at the array of creature bait offerings.  “There are a ton of styles that can create confusion in anglers,” said Crews.  “I’ve got a system with our creature baits that should help anglers know which styles of baits to throw when.”

Missile Baits currently makes three distinct styles of creature baits, the first is the D Bomb, a bulky, ribbed, beaver-tailed bait with flapping appendages on the sides.  The D Bomb is a 4-inch bait while the Baby D Bomb 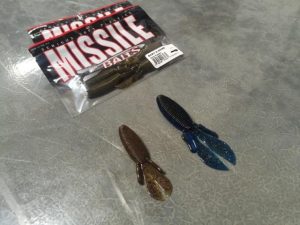 The D Stroyer features the same ribbed body of the D Bomb, but incorporated longer, curly tails and longer flappers on the side. The D Stroyer measures in at 6-inches while the Baby D Stroyer comes in a 5-inches.

The final creature style bait in the Missile Baits lineup is the Missile Craw.  This is a slick bodied 4-inch lure with bulging claws.

Each of them have applications in Crews’ arsenal.

Which Bait When?
Crews uses a combination of the season, and the necessary application to choose the bait he is going to throw. When it comes to the size of the bait he chooses, he lets the mood of the fish and the fishing pressure on the lake make the decision for him.  “If the fish are aggressive, I choose the larger sizes of the lures,” he said.  “If the conditions or the amount of fishing pressure makes the fish finicky, I choose the Baby versions.”

That usually means paying attention to the season first.  In the springtime when water temperatures begin to warm up, Crews prefers the larger sizes of his lures because they appeal to the needs of the bigger females. “When that water temperature crests 40 degrees and gets towards 50-degrees, I’m definitely going to have the D Bomb and the D Stroyer ready,” he said.  “Which bait I choose depends on the type of cover that bass are holding in.” 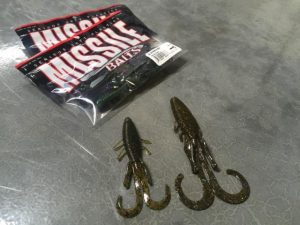 Because of the makeup of the baits, Crews said that the original D Bomb is better suited towards heavy cover and vegetation, while sparse cover is perfect for the D Stroyer.  “Pitching and Flipping the D Stroyer can be a little tricky because of the length of the appendages,” he said.  “The long legs tend to grab onto things, so if I am in heavy cover, I go with the D Bomb.”

When Punching heavy, matted vegetation is the technique of the day, Crews opts for the D Bomb, or if the cover is particularly heavy, then his Missile Craw is the best choice. “We get a ton of great feedback about the D Bomb for Punching, but there are times that a sleeker profile is important for penetrating cover,” he said.  “When that is the case, I always turn to the Missile Craw.  There are no appendages on the sides, and that makes it easier to present to bass in thick cover.”

Rigging for the Day
Crews prepares himself with a variety of setups depending on the rigging that is going to be needed to present his creature baits to the targets he is fishing.  He chooses those setups based on the size of the weight he is going to use, which is dictated by the cover he is fishing.

The majority of the time, he will be targeting some sort of sparse cover.  In this case, Crews is likely going to be fishing a tungsten sinker that weighs between 5/16 to ½-ounce, so he chooses a 7’6” heavy action Cashion Flipping rod paired with a high speed, 7.1:1 to 8.0:1 retrieve speed reel spooled with 20 to 25-pound-test Sunline Shooter Fluorocarbon fishing line.

If he is having to present a lure to heavy matted cover with sinkers that eclipse an ounce or larger, he opts for a longer, heavier rod he helped Cashion build for the Punching technique.  He uses the same high speed reels, 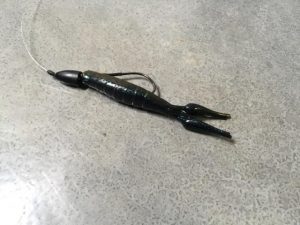 but upgrades his rod to a new 7’11” heavy action model that he pairs with 50 to 60-pound-test Sunline FX2 braided line.

He selects his hooks based on the size of the bait he is using.  For the full sized D Bombs and D Stroyers and he favors the 5/0 Gamakatsu Super Heavy Cover Flippin’ Hook.  If he is using the Baby D Bomb and Baby D Stroyer, then he opts for the 3/0 version of the same hook.  He also uses the Super Heavy Cover Hook in the 4/0 to 5/0 size for the Missile Craw.

Creatures as Jig Trailers
Crews said that he has received tremendous feedback about using his creature baits as jig trailers.  Of course, it didn’t take long for the world to see just how effective the D Bomb could be as a trailer.  In 2012, only a few months after the introduction of the Missile Baits brand, pro staffer Ish Monroe used the D Bomb on a Medlock Double Guard Jig to win the first Elite Series Event of 2012 at Lake Okeechobee in Florida.

It was illustrative of choosing which lure to use based on the conditions an angler was fishing.  Monroe was flipping the combination to tilapia beds at the base of clumps of reeds, and the larger profile helped draw larger bites.  Had the D Stroyer been released then, he likely would have chosen it for the larger profile, especially considering the fact that the targets were sparse cover.  “Ish loves the D Stroyer as a jig trailer,” said Crews.  “He was using it this year at Toledo Bend when he fished in the Elite 12 there.”

Choosing the Baby versions of the lures still applies when the bite gets a little tougher.  “I really like those smaller sizes on the Missile Jigs Ike’s Mini Flip Jigs,” he said.  “Those are tasty little morsels when things get a little bit tougher.”

The one time he has learned that the “choose the bait by the cover” rule does not apply is when fishing offshore.  “I’ve talked to several of our Bomb Squad members who have told me how great the D Stroyer pairs with Ike’s Headbanger Jig on offshore structure,” he said.  “The larger profile really makes for a big bait that can help make bigger fish strike.” 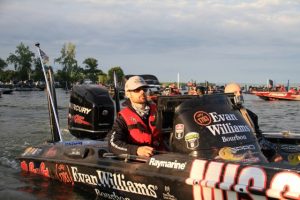 Wrapping Up
Of course there are no hard and fast rules when it comes to figuring out what it will take to make a bass bite.  What is a surefire way to smash ‘em one day proves to be a strike out the next day.  However, with these tips, anglers should be able to be able to pick a lure to give them a great starting point to help them catch more fish.