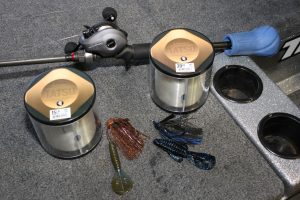 Each year, anglers all over the world utilize jigs to produce a better average sized bass over other lures like soft plastics.  That’s not to say that they produce the biggest bites; swimbaits are often the best tool for that job.  But, if you are an angler who is looking to increase the average size of fish from one to two pounders to three to five pounders, then a jig is your best bet.

Jigs can be used just about anywhere a Texas rigged worm can, but the overall size of bites an angler gets are likely bigger.  With that said, the number of bites can reduce because of the size of the lure.  The same attributes that make a jig a bigger profile for larger fish can make smaller fish shy away from it; with that said, another result can be less bites.

There are many types of jigs, Flippin’ jigs, swim jigs, grass jigs, etc.  However, the one jig that allows anglers to cover water quickly, but still remain in contact with the bottom is a football jig.  While many jigs are very target oriented lures that require a slower presentation, a football jig can be cast long distances and moved fairly quickly back towards the boat or angler on the bank, while maintaining bottom contact. 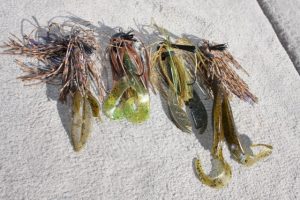 There are three basic retrieves that anglers can use with a football jig.  The first one is the drag.  Anglers make a long cast, point the rod tip at the lures and slowly sweep the rod tip to the side, feeling everything along the way.  This is the best retrieve for cold water because the angler can fish it deliberately, but maintain bottom contact at all times.

The next one is the hop and shake.  In this retrieve, the angler allows the lure to hit bottom, then lifts the rid tip to slightly hop the lure off the bottom while shaking to give it a quiver.  Be careful not to move the lure too much with this one, only use short snaps of the rod.  This is the most common retrieve employed by bass anglers across the country, and it does a great job of mimicking the action of fleeing crayfish. 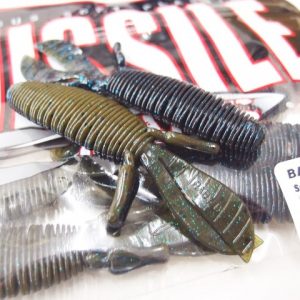 Finally, there is the stroke, a retrieve that is used largely for inactive fish.  Lift the rod tip quickly to make the lure hop four to six feet of the bottom and then follow it back down to the bottom with the rod tip to make the lure fall on semi slack line.  This often triggers strikes from lethargic bass, usually in the hot summer months.

The most important part of the jig is the hook.  In my opinion, the best hook is a round bend shank style with a crossed eye line tie because the line tie won’t pop the fish’s mouth open as much, and the round bend shank helps penetrate better on the hookset and keep fish buttoned better than a wide gap based hook.

With that said My favorite football jigs are Strike King’s Tour Grade Football Jig, a Davis Baits Old School Living Rubber Football Jig, An Ike’s Headbanger Jig by Missile Jigs or a Talon Lures Custom Football Jig.  I choose 3/8 to 5/8-ounce sizes in water to 15-feet deep and 3/4 to 1-ounce sizes in deeper water.  I typically choose brown or Watermelon based shades in clearer water then turn to a Green Pumpkin based jig in stained to dirty water, then black in darker waters.  I also like accent colors in my skirts, Watermelon with red, Green Pumpkin with orange or black with yellow or chartreuse are excellent.

Always use a matching, contrasting trailer of some sort with a football jig to impart action in the lure.  The most common setup is to thread a double tailed grub up the shank of the hook. In this instance, we like the Strike King Rage Menace Grub or the Missile Jigs Twin Turbo. Beaver styled creature baits like the Missile Baits D Bomb and Strike King Rodent and craw type imitators like the Gene Larew Salt Craws, Punchout Craw and the new Hammer Craw are also very effective.  Experiment in your lake to find the best trailer for the different conditions you face. 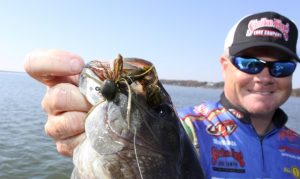 The final component of the Football jig arsenal is the equipment.  I like to use a 7’ to 7’3” medium-heavy to heavy action rod with 12 to 17-pound Seaguar InvizX Fluorocarbon in cold water and Seaguar AbrazX in warm water spooled on a high speed 7.0:1 or higher retrieve speed reel.

Try throwing football jigs on banks with little vegetation.  Fish them along the bottom on points, offshore structure with rocky, gravely bottom composition.  If an angler becomes confident in the use of a football jig, they can increase the size of fish they catch, and don’t we all want to learn how to catch bigger fish.