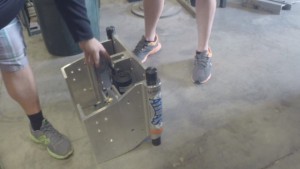 There are components to a bass boat that get less attention, and are seemingly less glamorous than the rest.  Lowrance Electronics, HydroWave Power Poles and several other add-ons get top billing while the parts that are equally as important do not.

Jack plates are especially important for performance and allowing an angler to take their boat into shallower water; which can make a huge difference at times.

The Atlas’ pump is mounted inside the plate itself meaning there is no additional space required for pumps in the rigging compartment of the boat so accessories like Power Pole pumps can be installed there as well.

Perhaps the best part of the Atlas is that its space aged materials are self lubricating, so there is very little maintenance and a lot less mess that is commonly associate with hydraulic jack plates.  The Atlas gives the angler all of the functionality of a hydraulic jack plate without the buildup of grime from sand, dirt and oil attaching itself to the grease that lubricates the slide plate.

AdvancedAngler.com’s Dan O’Sullivan recently installed an Atlas Hydraulic Jackplate on his boat, and he filmed everything from removing the factory manual plate to prepping and installing the Atlas to wiring the Finger Flex Dual helm switches and the gauge.  All of this was filmed at Buck’s Island Marine in Southside, Ala. with the help of shop employee and local angler Justin Elliot.

Get in there and get dirty with us while we install the T-H Marine Atlas Hydraulic Jack plate.